Samsung to launch Galaxy A70 in India next week: Here is how much it will cost you

Galaxy A80, which was announced globally on April 10, has a pop-up rotating triple-camera system and a full-screen display. 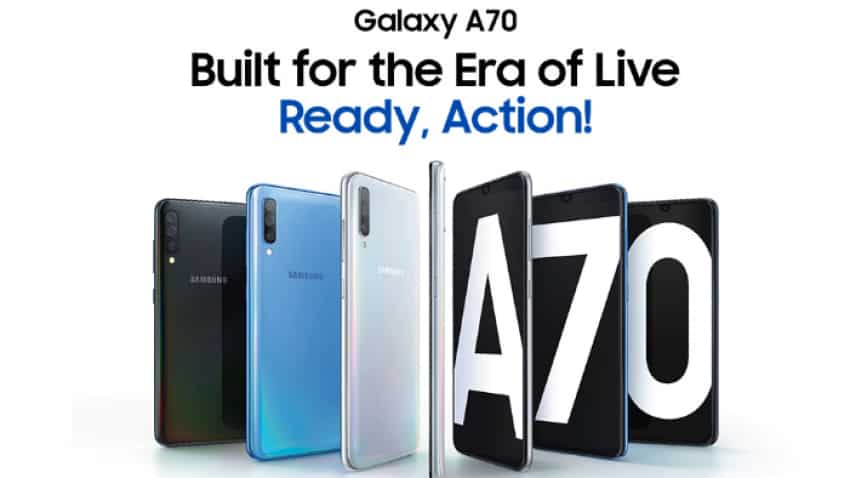 Samsung India, which is targeting $4 billion in revenues from its Galaxy "A" series of phones in 2019, is geared up to challenge its Chinese competitors with several new devices, including the Galaxy A70 smartphone next week and the Galaxy A80 in May, a top company official said on Monday. "We will launch the Galaxy A70 in India next week in the Rs 25,000-Rs 30,000 bracket and the Galaxy A80 in the Rs 45,000-Rs 50,000 bracket in May," Ranjivjit Singh, Chief Marketing Officer and Senior Vice President, Samsung India, told IANS.

Featuring a 6.7-inch Infinity-U display, the Galaxy A70 comes with 4,500mAh battery, super-charging technology and a triple camera system at the rear. Galaxy A80, which was announced globally on April 10, has a pop-up rotating triple-camera system and a full-screen display. The South Korean tech giant is facing stiff competition from Chinese smartphone makers, especially in the budget and mid-range segment. Samsung`s increased focus on the `A` series which offers phones in the Rs 10,000 to Rs 50,000 segment, shows that the company is ready to give its Chinese competitors a tough fight in the coming days.

"We are targeting $4 billion from the Galaxy A series over the calendar year. Just in the first 40 days starting March 1, we have sold a total of two million units of three Galaxy `A` models in India -- A50, A30 and A10. The revenue turnover from these three phones in 40 days is $500 million. I think this is a record for any brand in the industry," Singh added. "When the rest of the portfolio in the `A` series becomes available we are sure of not only achieving, but exceeding our target," he said, adding that the A series phones will continue to be available across the channels - both online and offline.

Samsung now has a phone in the Galaxy A series in almost all price ranges in the Rs 10,000 to Rs 50,000 bracket. "The portfolio is ever-evolving with the consumer. To hit $4 billion revenue I will have to look at every opportunity. We will come up with the right opportunity for the range you are referring to (the Rs 30,000-Rs 45,000 segment). Just because we have not announced "A" phone in this range in India, does not mean we are not working on it," Singh told IANS.

Samsung India, which earned revenues of $5.5 billion from its smartphones business in the country in the 2018 financial year, is also launching other cheaper phones -- like the `M` series -- to take on the Chinese smartphone makers. "We are going to ship out Galaxy A2 core this week at Rs 5,290. This is going to be a tremendous boost to people who want to switch from feature phones to smartphones. This is going to be huge in terms of volume," Singh added.