Samsung on Wednesday announced a new external SSD with an in-built fingerprint scanner that adds an extra layer of security to your data. The Portable Solid State Drive (SSD) T7 Touch claims to offer fastest transfer speeds currently available based on the USB 3.2 Gen 2 standard. 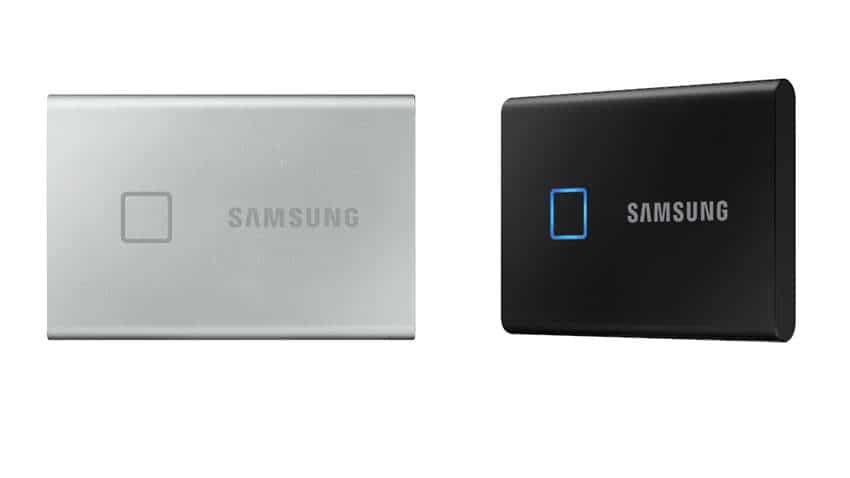 Apart from the fingerprint scanner, the SSD also features a ‘Motion LED’ which allows the user to determine the status of the device. Source - Samsung.
Written By: ZeeBiz WebTeam
Edited By: Harish Dugh
RELATED NEWS

It comes with a read speed of 1,050MB/s and a write speed of 1,000MB/s[3] and is almost twice as fast as its predecessor, the T5. The new hard disk is also up to 9.5 times faster than external HDDs. Moreover, the device can reach its maximum speed when used with the NVMe interface.

“Consumers who are constantly on the go between work, play and passion projects want to be able to securely carry their content with them,” said Akash Saxenaa, Senior Director, Enterprise Sales, Samsung India. “Now their data is secure thanks to the fingerprint recognition functionality incorporated into the product, which delivers industry-leading transfer speeds in a compact form factor.”

Apart from the fingerprint scanner, the SSD also features a  ‘Motion LED’ which allows the user to determine the status of the device. Weighing 58 grams, the T7 Touch is available starting this month in over 30 countries worldwide. Samsung has also announced that Portable SSD T7 is likely to be launched in the second quarter of 2020.

It will be available across retail channels, online and offline, from February 2020 in India.