Samsung has announced two smartphones as part of its Note series – the Samsung Galaxy Note 10 and the Galaxy Note 10+. Both the devices come with several improvements on the previous device on paper. 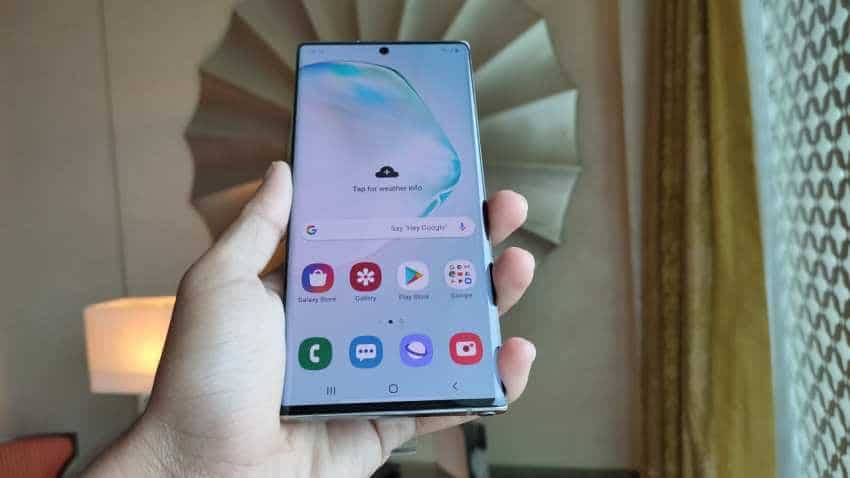 The hype surrounding the latest flagship devices by Samsung has been quite high ever since the company first announced that they will be coming. Image source: Zeebiz
Written By: Manas Tiwari
RELATED NEWS 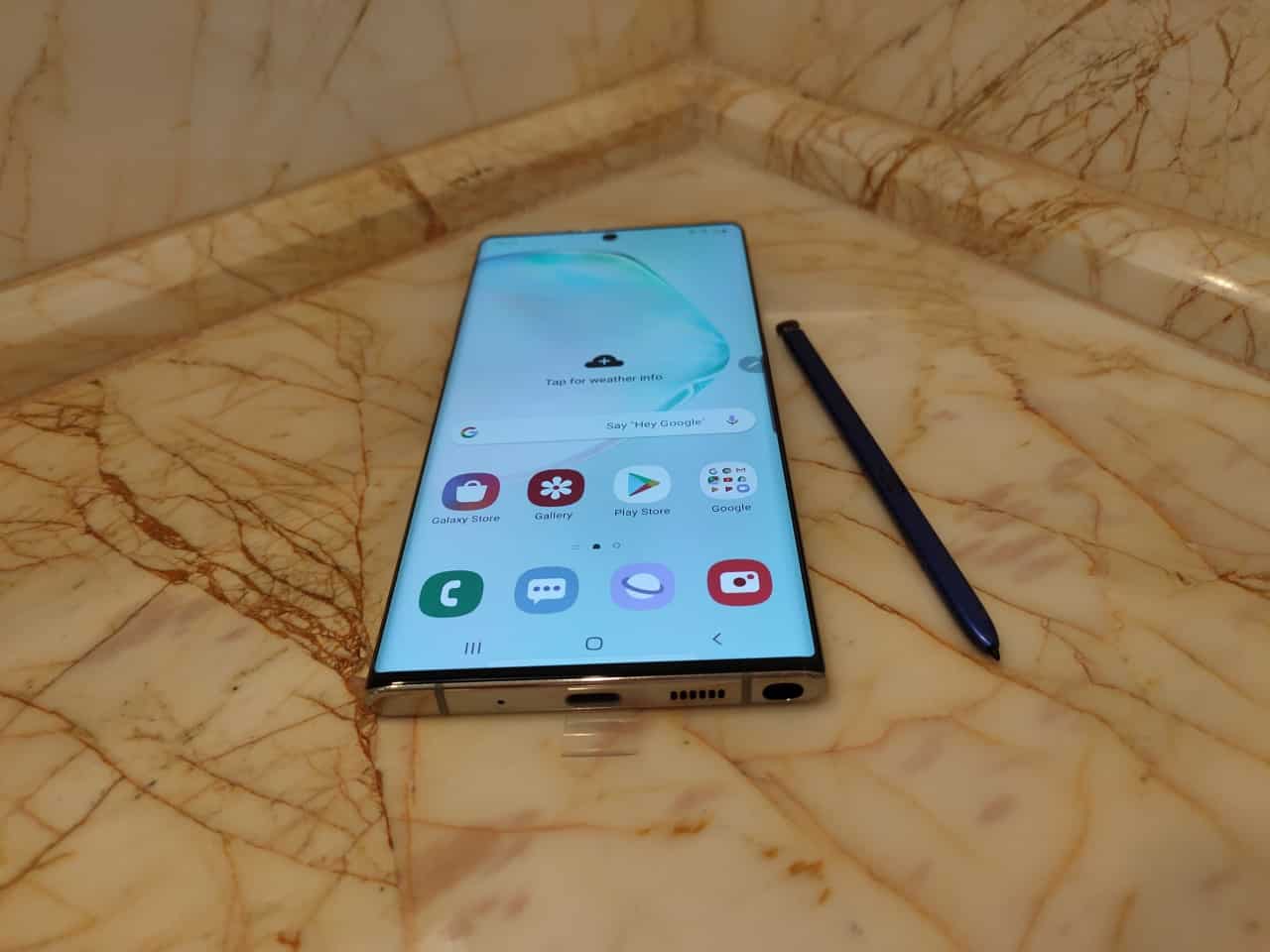 With the Samsung Galaxy Note 10+, the company is offering the biggest screen on a Note device ever. This is about four inch more than what you get on the Samsung Note 9. Personally, I am not a huge fan of bigger screens and prefer more compact devices. But surprisingly, the Galaxy Note 10+ doesn’t feel that big or heavy in your hand. It fits in really well in your palm. Samsung has made some impressive changes to the overall design of the device, with the edges now been made flatter and thickness reduced.

A major change on the Galaxy Note 10+ that you are unlikely to miss is that the power button is present on the left panel. I am not sure why this has been done but it will take a while to get used to it. I have been using a phone with the power button on the right side forever now and even after some hours of usage, still get confused while lifting the Note 10+. Also, there is nothing on the right side which feels a bit odd. However, the power button has multi-function capability, which is on Bixby by default. But, of course, that can be changed. 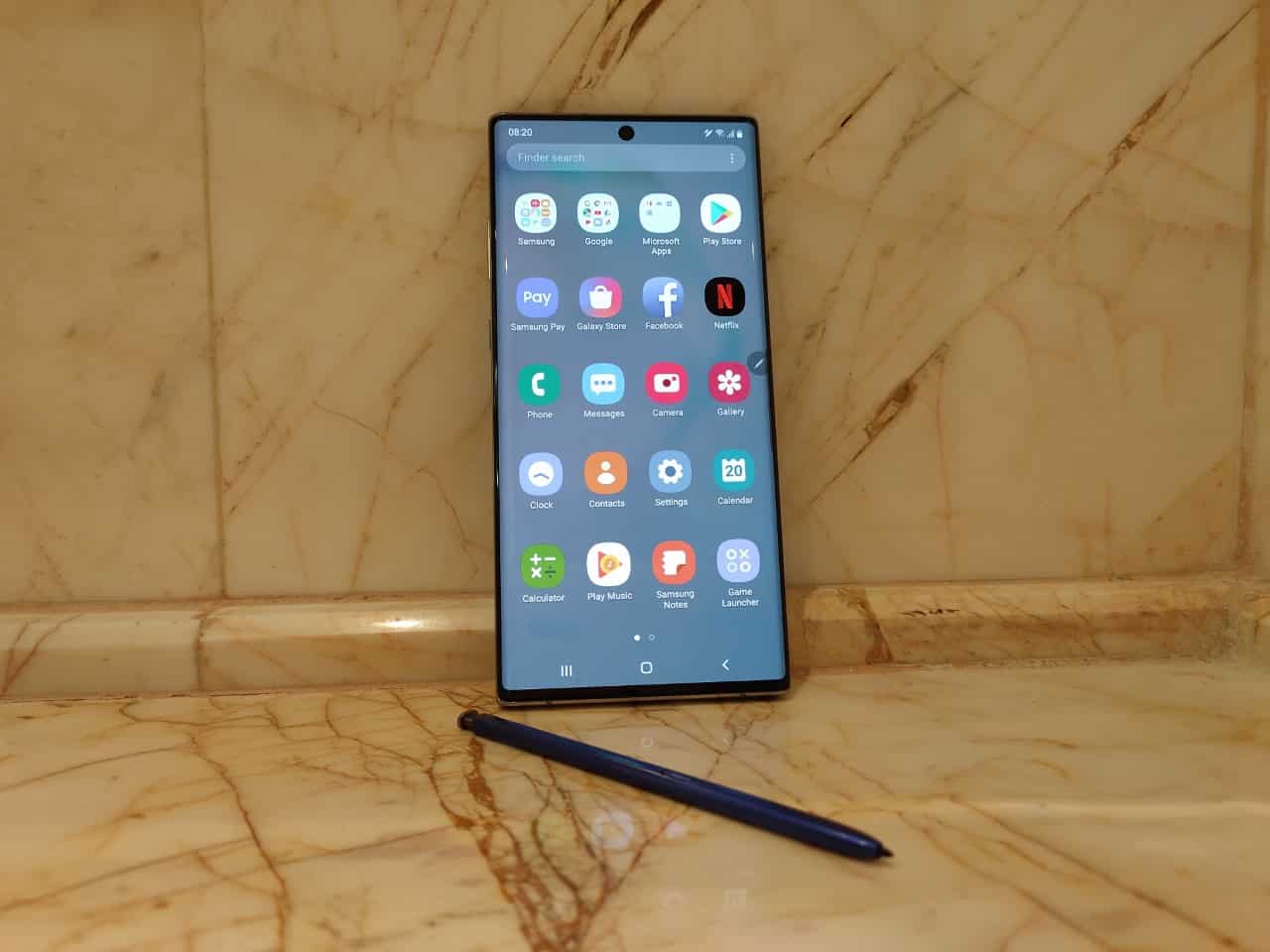 The phone has been launched in three colour options in India: Aura Glow, Aura Black and Aura White. I have the Aura Glow variant with me which stands out from the other two colours because of its flashy nature. It is basically a shade of grey colour but keeps changing with the surrounding lighting. This is a very unique colour choice and would draw a lot of attention. I am not sure if this is the most ideal option to take inside a movie theatre or any other place where you would prefer remaining under the radar. Maybe I will take it along to watch a movie soon and find out if I draw attention or not! From the initial look, the Auro Black seems to be a more elegant and simple option.

While more and more manufacturers are claiming to offer us a better screen-to-body ratio, Samsung has done an incredible job here with what its calls the Infinity-O display. There are almost no bezels on the screen and you get a really vivid and immersive experience. 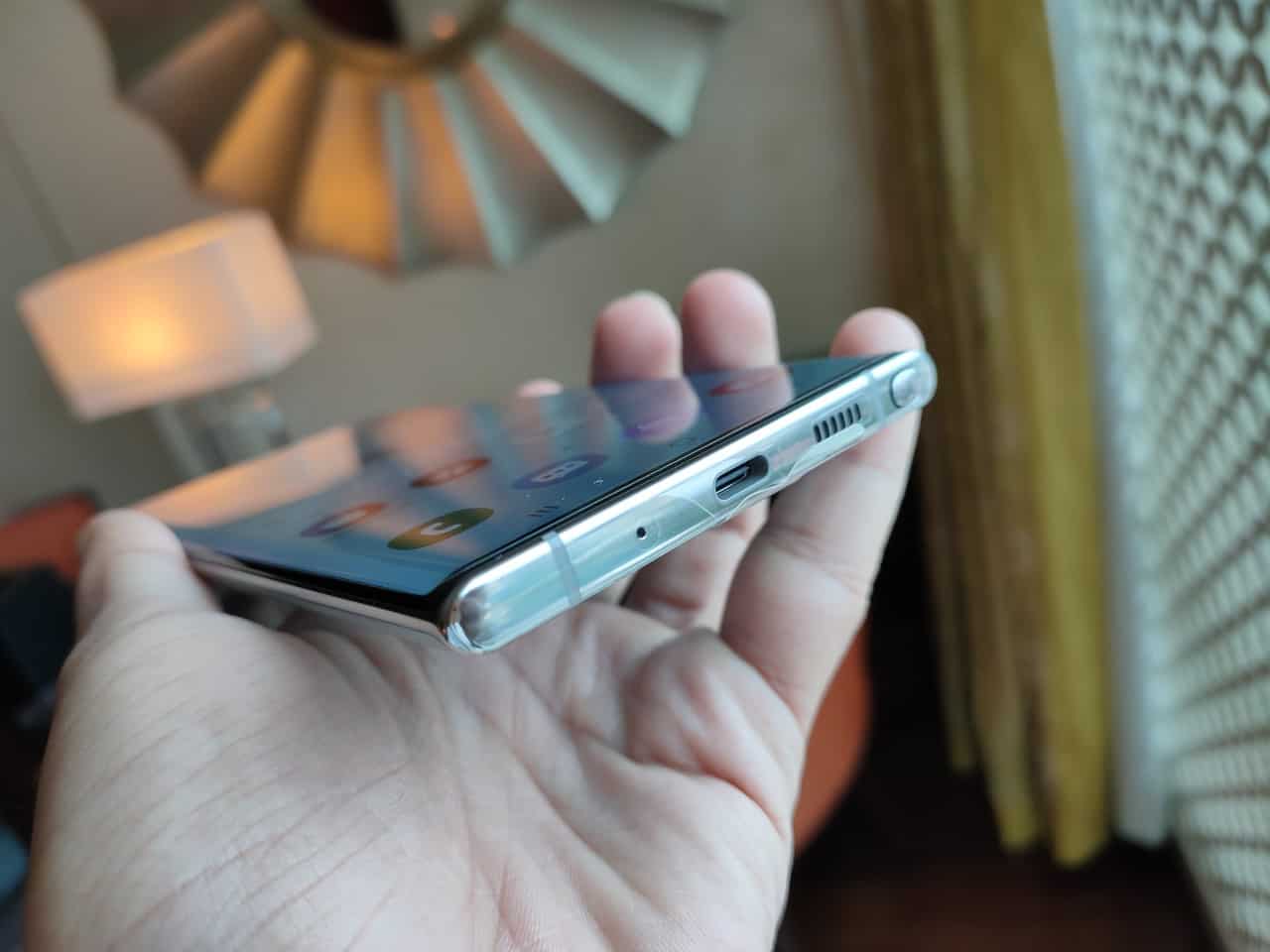 At the botton, you get the Type-C charging port and as many of you would notice, there is no 3.5mm jack. A lot of has already been said and written about this. But then, Samsung is offering you a Type-C earphone so there’s no reason to complain at all. Alongside the charging port you get the S Pen which is the biggest highlight of the Note devices, this time even more, with the improved features. It comes with a single button to activate Bluetooth functions and the new Air actions.
The Air gestures sound very impressive and I did try few of them. Again, this is something which might take you a while to get used to. Also, I am yet to try all these features. So, wait for our full review to get a better look at what the S Pen offers.

At the back panel, you get a vertically aligned triple rear camera setup along with an additional Depth vision sensor. For selfies, you get a 10MP hole-punch camera. Two major features here are that you can now add blur effect to even videos and a highly impressive Night Mode which allows you to click images in almost no light.

Samsung has also added an audio zoom-in feature which allows you to record clear audio while shooting videos. But, for this, you need to actually zoom in the video. This may allow you to get clear audio but somewhere the video quality is compromised. While this is an amazing innovation from Samsung, I want see in how many cases it actually proves to be useful. 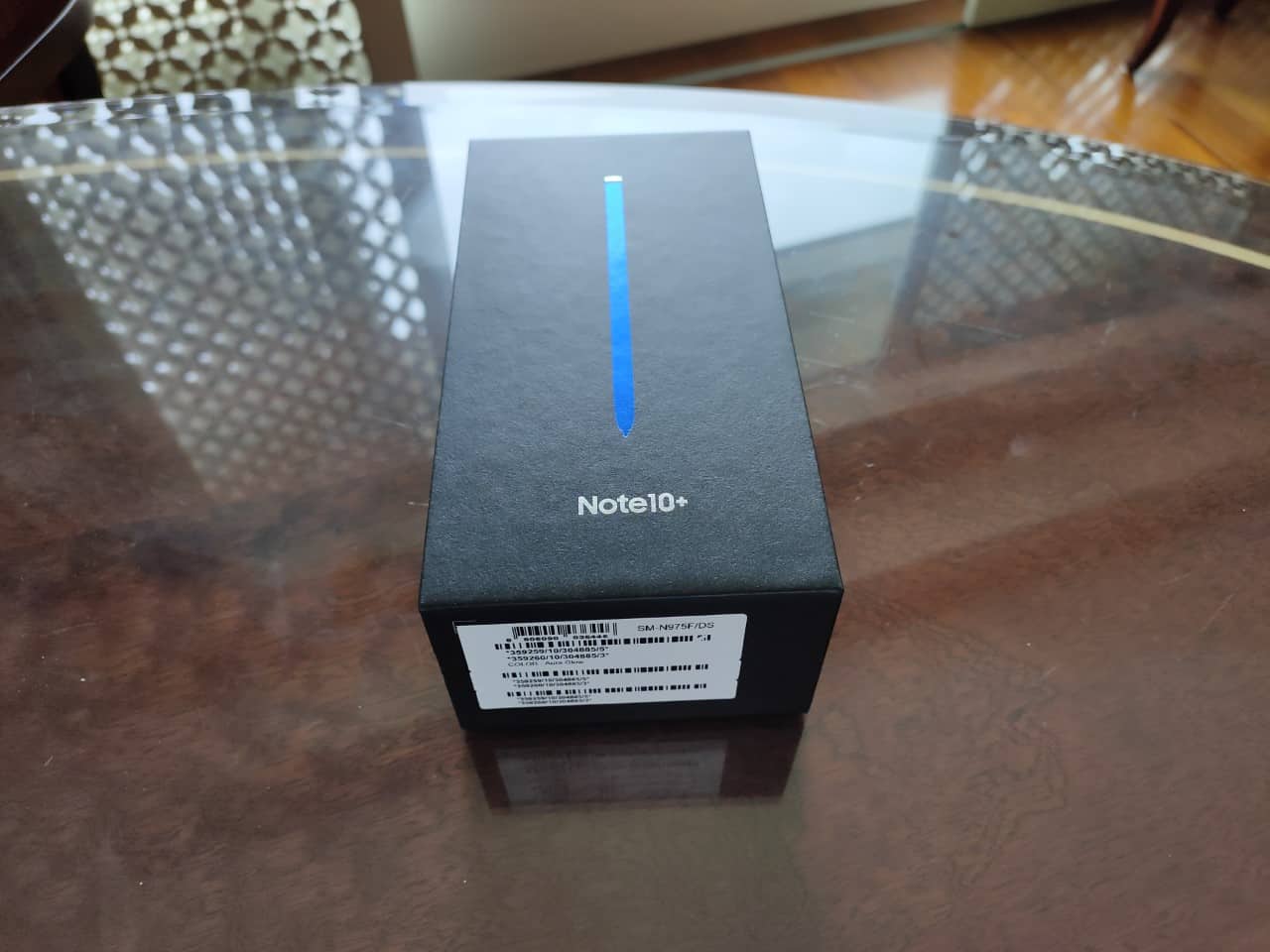 The Galaxy Note 10+ comes with Android 9 Pie with the Samsung One UI. It offers you a seamless experience. You get all the basic Samsung apps like calendar, contacts, image gallery, music player, and web browser software. There is also Samsung Pay and Samsung Notes, the latter too getting a major update with the ability to pinch to zoom, change colors of text after you enter it and handwriting to text. This again remains to be tested.

From the limited time I have spent with the Samsung Galaxy Note 10+, I must say that you should believe the hype around this device. The latest offering by Samsung is packed with some highly useful and productive features. If used properly, the device does have the potential to make your life easier. And, with this device, you are getting the coolest S Pen experience ever.

The only thing you probably need to consider before making the purchase is that the Samsung Galaxy Note 10+ price in India starts at Rs 79,999, which almost double to what you would probably pay for an OnePlus device. However, the device is designed for enterprises and offer them great value for money and a premium experience.

(Disclaimer:The journalist is in Bengaluru to cover the Galaxy Note 10 series launch on Samsung’s invite.)