Samsung Galaxy J8 is priced at Rs 18,990 and was launched on 28th June 2018. The device is now available in Blue, Black and Gold colours . You can shop online through Samsung’s e-shop and Paytm, Amazon, Flipkart. 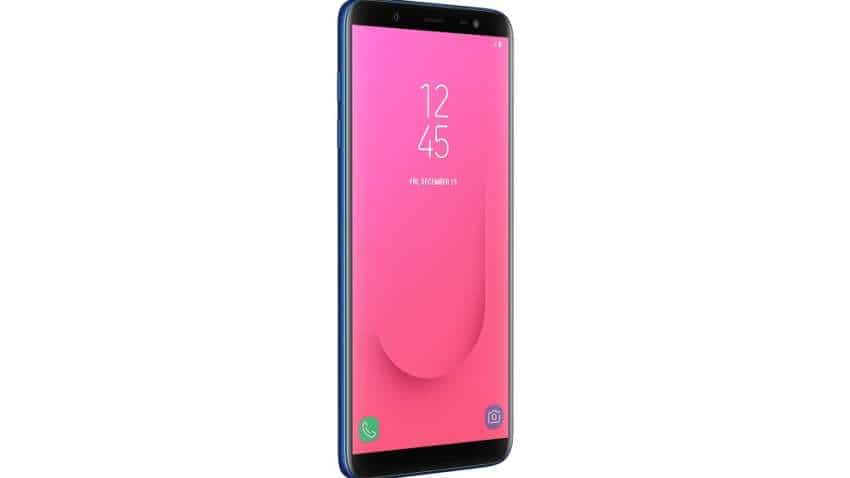 Samsung on Thursday announced the launch of Samsung Galaxy J8 in India. Galaxy J8 is a part of new Infinity series of models from Samsung. It was announced last month along with Galaxy J6. It has 6" Super AMOLED Infinity Display and dual camera.

Samsung Galaxy J8 comes with a premium polycarbonate unibody and has a 6” HD+ super AMOLED infinity display.  The primary dual rear camera set up has 16MP with f/1.7 aperture and 5MP with f/1.9 aperture. The front camera is a 16MP setup with f/1.9. It comes with the latest Android Oreo 8.0 operating system. Its performance is bolstered by Snapdragon 450 processor and provides great performance with 3,500mAh battery. Galaxy J8 also has a storage capacity of 4GB + 64GB memory (expandable up to 256 GB).

Consumers can get professional grade photographs with the help of artificial intelligence that allows experimenting with the foreground and background of the image. The dual camera also delivers Samsung’s flagship ‘Live focus’ feature.

Samsung Galaxy J8 is priced at Rs 18,990 and was launched on 28th June 2018. The device is now available in Blue, Black and Gold colours. You can shop online through Samsung’s e-shop and Paytm, Amazon, Flipkart.

“At Samsung, our constant endeavour is to bring meaningful innovation in our products and services that can truly add value to the lives of consumers. Our signature Infinity display, Chat Over Video and Samsung Mall are already a hit amongst millennials and with Galaxy J8, we have focused more on the camera, which is one of the most used features for the millennial today. Two of the top three apps downloaded in India are photo editing apps. With the Galaxy J8, consumers can customize their images without any third party app and we are confident that they will love the flagship Live Focus feature and industry-first features like Portrait Dolly, Portrait Backdrop, and Background Blue shape, ” said Sumit Walia, Director, Mobile Business, Samsung India.

People who are willing to buy Galaxy J8 can prefer buying it through ICICI Bank credit or debit card or Paytm to avail the additional offer.

“Consumers buying Galaxy J8 through ICICI Bank credit and debit cards or Paytm Mall will get an additional cash back of INR 2,000. Moreover, all consumers activating their Galaxy J8 on or before 31st July 2018 can also avail a One Time Screen Replacement,” announced Samsung.