Samsung Galaxy Buds+ review: This is art, Samsung is the artist

Samsung Galaxy Buds+ review: Samsung has beefed up the second generation earbuds with newer features including an additional microphone for better audio and improved battery life. I have been using these earbuds for a few days now and here is our full review of the Samsung Galaxy Buds+. The Samsung Galaxy Buds+ are an absolute piece of art.
Written By: Manas Tiwari
Edited By: Harish Dugh
RELATED NEWS

Samsung Galaxy Buds+ review: Samsung has been active in the true wireless segment for a while now but made some real noise with the launch of Galaxy Buds last year. But, the South Korean giant got only limited success with the TWS – acquiring 7 per cent market share in the segment as per the latest Counterpoint report– equal to Realme that had launched its first product in December last year. The difference in pricing of the two devices obviously had a role to play.

Hoping to extend its presence in the category, Samsung launched the Galaxy Buds+ earlier this year, along with the Galaxy S20 line up of smartphones. The new pair of earbuds are priced at Rs 13,990 but were available in India for Rs 11,990 through pre-orders.

Samsung has beefed up the second generation earbuds with newer features including an additional microphone for better audio and improved battery life. I have been using these earbuds for a few days now and here is our full review of the Samsung Galaxy Buds+.

The Samsung Galaxy Buds+ are an absolute piece of art with the company investing a lot of time to achieve near-perfect design and unparallel comfort level. The Galaxy Buds+ shout premium from every corner and fit in perfectly. 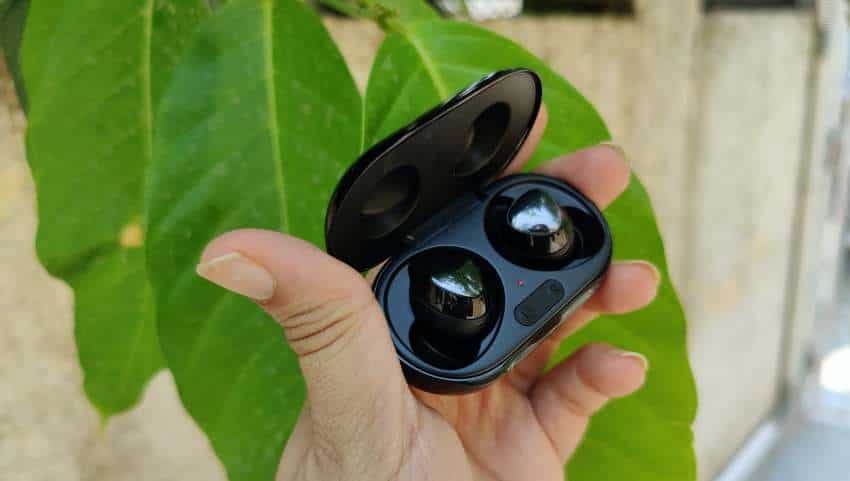 The Galaxy Buds+ look very similar to their predecessor, at least on the first look. Samsung has continued the same form factor. And, rightly so. The Galaxy Buds were one of the most comfortable earbuds available in India and the Buds+ are no different.

You get three pairs of wings and silicone ear tips, allowing you to adjust and customise the fitting. This actually works in favour of the earbuds and gives them an edge over the stick design which depends on one size fits all philosophy.

Now, while the Galaxy Buds and Buds+ are essentially Seeta and Geeta with similar traits, they have their unique characteristics as well, which make the latter a more up-to-date and truly premium device. The first change comes in form of a glossy finish on the charging case instead of the matte finish that we saw on last year’s model. 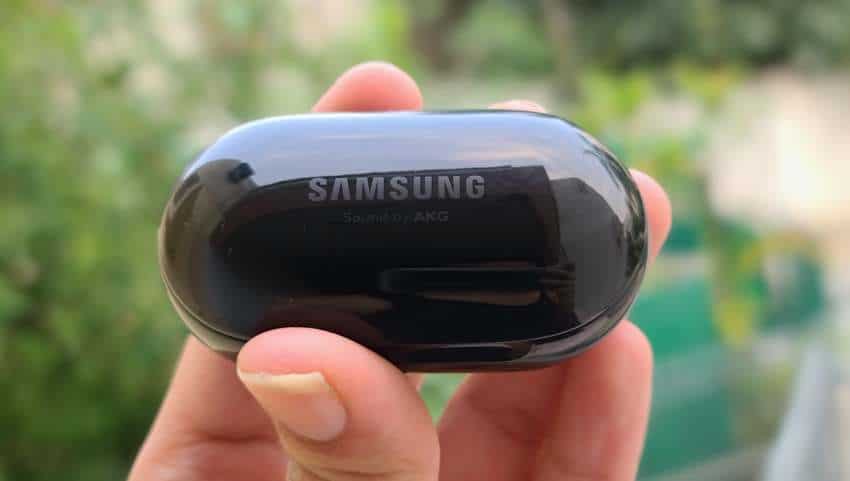 Also, now you have more colour options to choose from. The Galaxy Buds+ come in three colour options - blue, white, and black. We had the last variant for review purposes.

The other design elements remain same. You get an indicator light on the front of the case and a USB Type-C port for charging at the back. The case can also be charged wirelessly through reverse charging on a smartphone that supports this, or using a Qi wireless charger. For connectivity, you get Bluetooth 5.0. 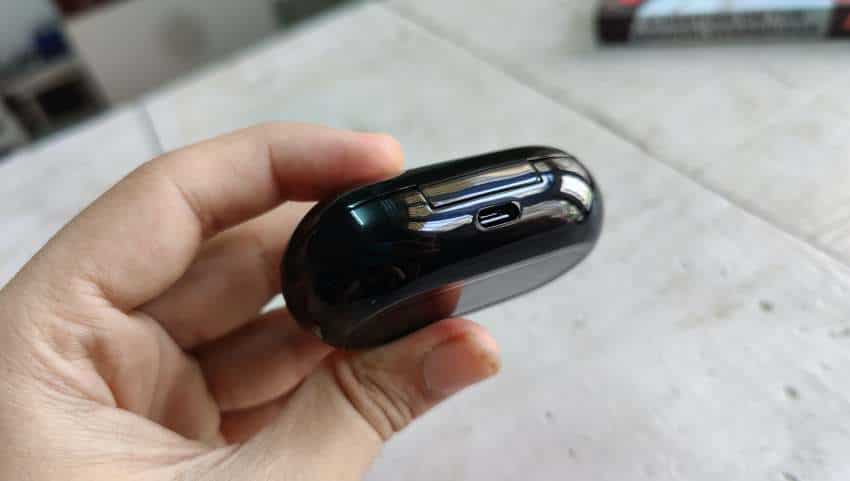 The Galaxy Buds+ also have support for touch controls which are easy to use and respond well. You can tap the buds to play/pause music, skip to the next or previous track, control volume or activate voice assistant. All of these can be customised from the Samsung Galaxy Wearable App.

Even the best of audio devices need equally effective app to deliver best possible performance. In that case, Samsung’s Galaxy Wearable app is the ‘Yaar’ you need. The buds come with quick pairing feature which allows your Samsung smartphone to detect the device as soon as the case is opened. 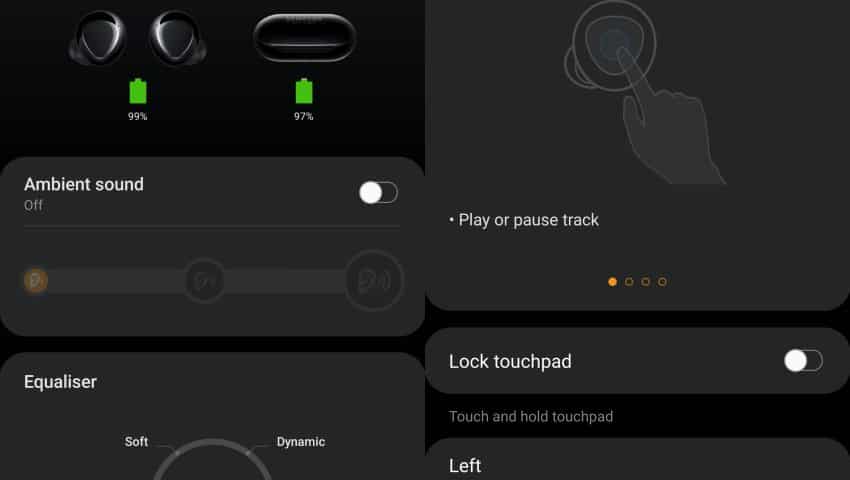 The buds are then connected to your smartphone as well as with the app, which comes with several useful features like an equaliser, custom touch controls, the ‘Find My Earbuds' tool to locate the earbuds and ability to read notifications. You can also control ambient sound from within the app. It also shows you the exact charging of the buds as well as the case.

Samsung has also released the Samsung Galaxy Buds+ app for iOS, which brings official app support for these earphones to Apple devices.

Samsung might not have played around with the design of Galaxy Buds+, but it has significantly improved their performance. The buds come with dual-driver design and audio tuning by AKG, which truly lifts your listening experience. The additional microphone, which takes the total to three, helps in achieving better call quality. I largely used the Buds+ with Samsung Galaxy S20 Ultra to satisfactory results. Most songs sounded excellent while streaming through Spotify as well as YouTube.

I liked the fact that Samsung didn’t add extra bass which ensures consistent output across genres. The Weekend’s ‘Blinding Lights’ sounded as good as Lucky Ali’s ‘O Sanam on the Galaxy Buds+. The music was crisp, instruments were clear and bass was never imposing. If you want more thump, you can select bass boost option from the app.

Samsung has also done some sort of integration with Spotify which launches the app as soon as the buds are connected to the smartphone. The last track is also played automatically without you having to do anything. This just adds to the overall ease but can sometimes be annoying, especially when you are connecting the buds to take a call or play specific media.

I found the audio to be equally good while listening to podcasts and watching videos over YouTube. 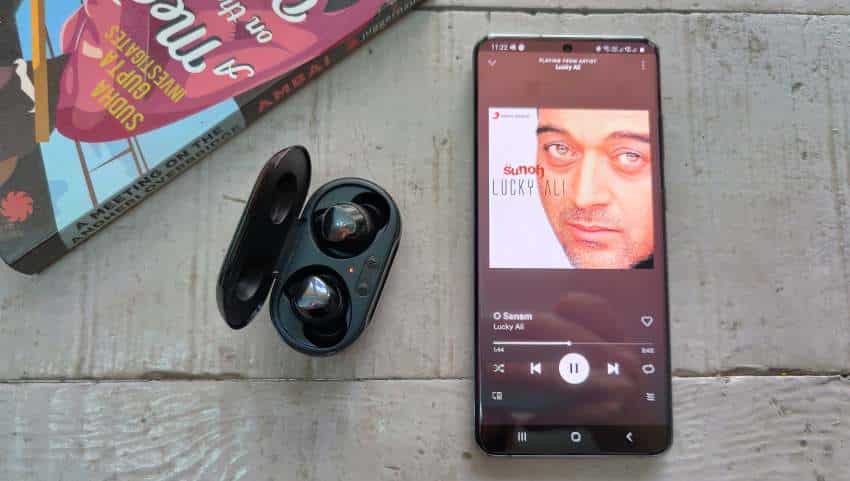 One of the major let downs is that for some reason, Samsung was totally ignorant towards the fact that earbuds are largely used during running or workout sessions. That could be the only reason why it went with IPX2 certification which means that earbuds cannot be subjected to submersion or even heavy water sprays. Some other TWS, priced relatively lower, come with better rating.

While call quality was also decent, there were times when I got the feedback that background noise was also audible. The most impressive part about the Samsung Galaxy Buds+ is its battery life. It’s incredible how the South Korean giant managed to fit a large 85mAh battery in each of these earbuds that delivers a combined battery life of 11 hours – one of the highest I have heard on any TWS.

This is combined with a bigger 270mAh battery in the charging case which offers an additional 11-hour battery. So, you can easily get around a day’s battery life from the buds and case combined.

The Samsung Galaxy Buds+ sit right on top of the food chain (along with Huawei Freebuds 3) when it comes to truly wireless earphones for Android smartphones. With these, you get a slick design, genuine truly wireless experience, great audio quality and larger battery life. If you own a Samsung smartphone, then the experience reaches another level. The company has somehow managed to offer great comfort level with these earbuds but what makes me refer to this as a piece of art is the fact how Samsung managed to fit in a battery that lasts for 11 hours, while keeping the size really compact.

There are few important features missing like noise cancellation and better IP rating, which you would ideally want to see at this price point. What works in favour of Samsung is that despite being priced at Rs 11,990, the Galaxy Buds+ have very limited competition in the market – at least till Sony debuts its first ever TWS in India.

Domestic traffic's slow growth due to inconsistency among states on quarantine rules: IndiGo