Samsung Galaxy A70 vs Vivo V15 Pro: Which smartphone should you spend on?

Both Samsung Galaxy A70 and Vivo V15 Pro offer some exciting features and cost you less than Rs 30,000. But, which device suits your needs better and you should spent your money on? Here is a comparison that you will help you make the right decision: 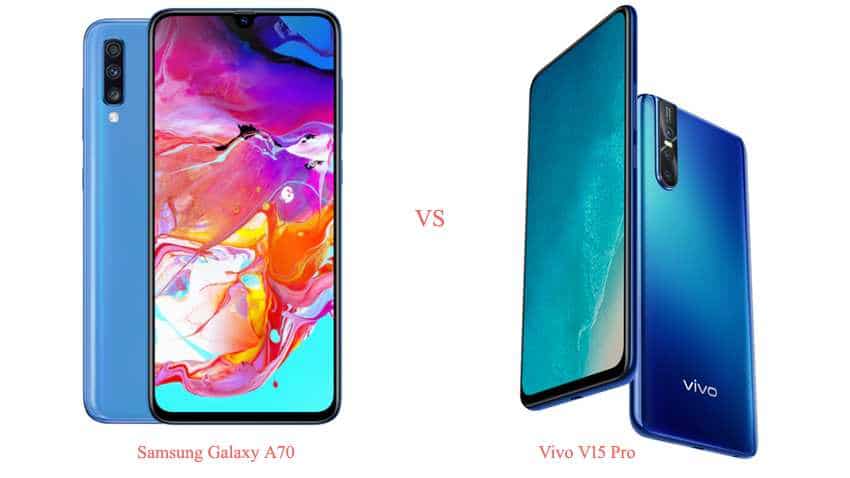 A few smartphones in sub-Rs 30,000 category come with features that even most flagships don't have.
Written By: Manas Tiwari
RELATED NEWS

More and more smartphone manufacturers have been targeting the sub-Rs 15,000 category in India over the last few years, leading to a plethora of options for consumers. On the other hand, the prices of flagship-class smartphones have skyrocketed, making them tough to afford for everyone. This gap has left the sub-Rs 30,000 category in an interesting situation with limited, yet exciting options. In fact, a few smartphones in this category come with features that even most flagships don't have. The Vivo V15 Pro, for example, comes with a pop-up selfie camera and in-display fingerprint sensor. Meanwhile, the recently launched Samsung A70 sports the largest screen on a Samsung phone and comes with 25W fast charging.

Both these recently launched devices offer some exciting features and cost you less than Rs 30,000. But, which device suits your needs better and you should spent your money on? Here is a comparison that you will help you make the right decision:

The Samsung Galaxy A70 box contains the smartphone, the adapter, charging cable which can also be used to transfer data and Samsung earphones. There is also a back cover and a user manual inside the box. 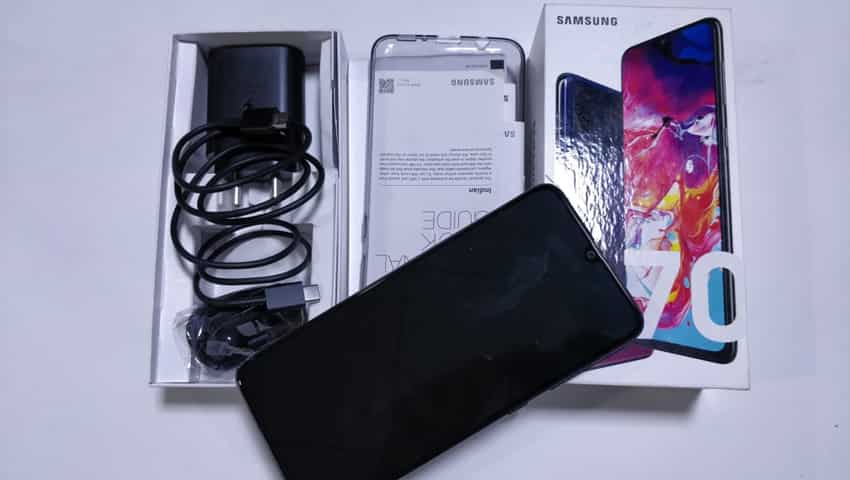 On the other hand, the Vivo V15 Pro contains the smartphone, the adapter, charging cable and the user manual. The buyers also get Vivo earphones with the phone. 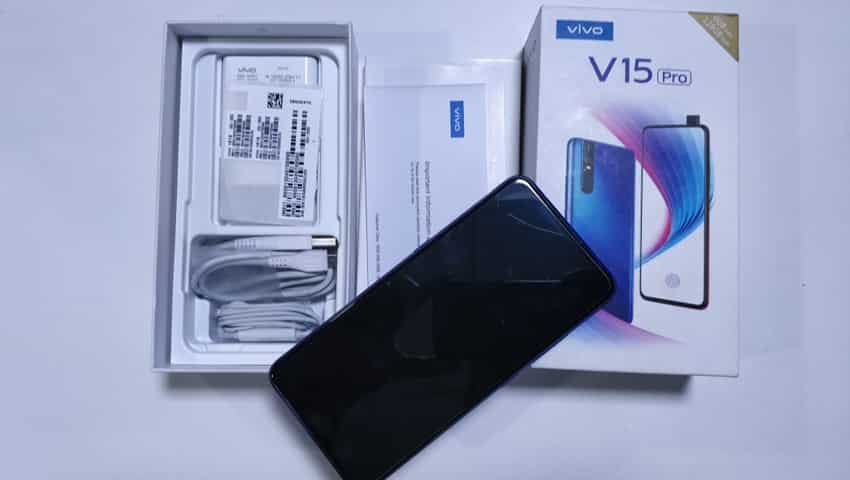 There is not much difference in Samsung Galaxy A70 from the earlier launched Galaxy A series devices like the Galaxy A30 and the A50, apart from the screen size. The Galaxy A70 sports the biggest screen on a Samsung smartphone so far. It has a 6.7-inch Super AMOLED display with 1080x2400p resolution and 20:9 aspect ratio. The right panel has both the power as well as volume buttons. The The Samsung Galaxy A70 measures 164.30 x 76.70 x 7.90mm (height x width x thickness). It has a triple camera setup on the back along with the LED flash.

The Vivo V150 Pro comes with a slightly smaller, yet a big enough screen. The phone comes with a 6.39-inch touchscreen display with a resolution of 1080x2340 pixels and an aspect ratio of 19.5:9. The Vivo V15 Pro measures 157.25 x 74.71 x 8.21mm (height x width x thickness) and weighs 185.00 grams. The volume and power buttons are present on the right panel, the left panel sports the microSD card tray while the SIM tray is at the bottom. Vivo V15 Pro also features a triple camera setup at the back. 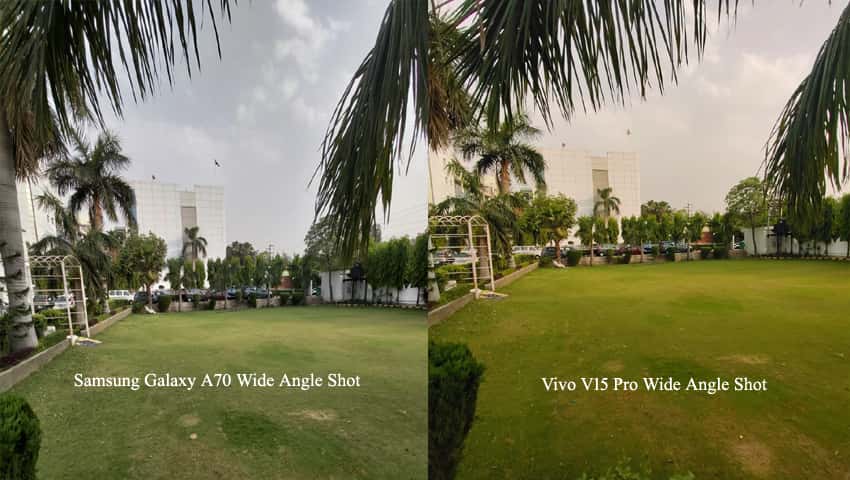 On the front, the Samsung Galaxy A70 sports a 32-megapixel camera with an f/2.0 aperture for selfies. 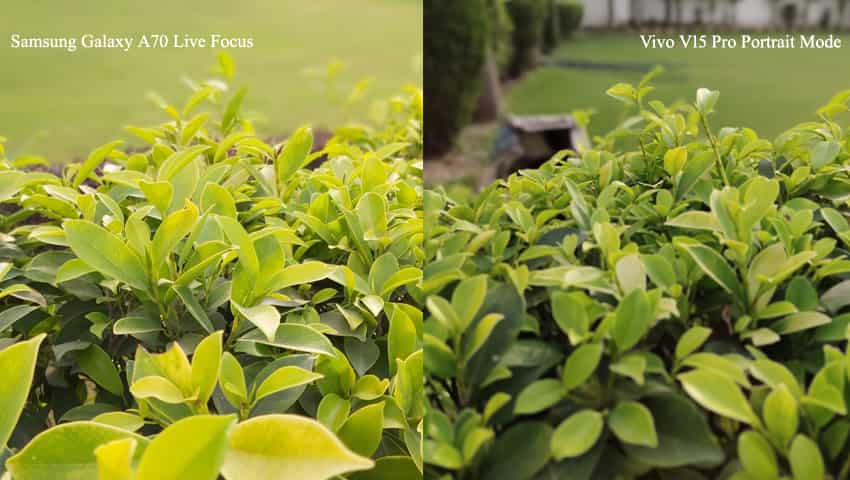 On the front, it sports a 32-megapixel camera for selfies, with an f/2.0 aperture. But, this is a pop-up selfie camera which is likely to make your jaw drop for a few seconds.

Samsung Galaxy A70 is powered by a 1.7GHz octa-core Qualcomm Snapdragon 675 processor. The smartphone has been launched in just one variant: 6GB RAM and 128GB internal storage. The storage can, however, be expanded up to 512GB using a microSD card. The Galaxy A70 is a dual-SIM (GSM and GSM) smartphone that runs One UI based on Android 9 Pie. It has been launched in four colour options in India: Black, Blue, Coral, and White colours. It comes with an on-screen fingerprint sensor and USB Type-C port. The phone is powered by a 4,500mAh battery that supports 25W Super-Fast Charging technology.

Vivo V15 Pro is powered by an octa-core Qualcomm Snapdragon 675 processor. Again, it has only been launched in one variant: 6GB RAM and 128GB internal storage. The storage can be expanded up to 256GB using a microSD card. The Vivo V15 Pro is a dual-SIM smartphone that runs Funtouch OS 9 based on Android Android 9.0 Pie. It is powered by a 3,700mAh battery and supports proprietary fast charging. The smartphone comes in Topaz Blue and Ruby Red colour options.

There is not much difference when it comes to the price of both these smartphones. The Samsung Galaxy A70 has been priced at Rs 28,990 while the Vivo V15 Pro would cost you Rs 26,491.