RIL vs Amazon vs Flipkart: Why Mukesh Ambani-led firm will be a clear winner in this e-commerce battleground

The new policy has come into effect from February 01, 2019. Few notable norms are - 100% FDI under automatic route is permitted in marketplace of e-commerce. 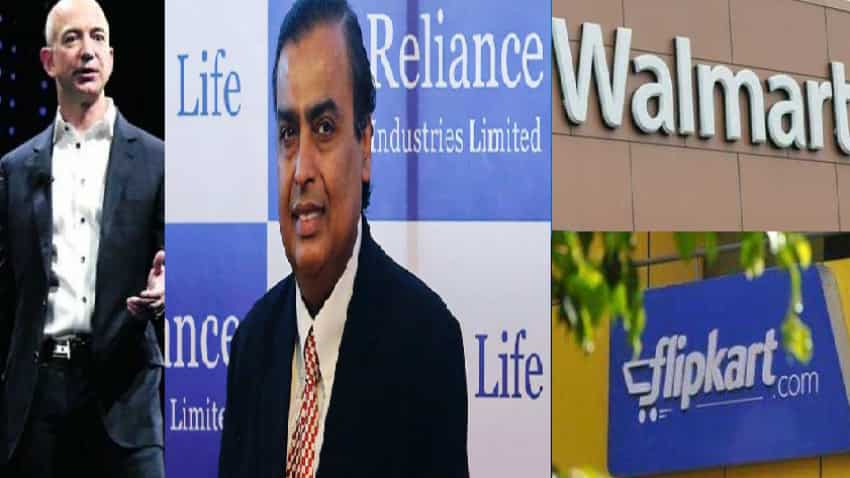 One thing is clear, that both Amazon and Flipkart are not happy with new FDI rule. But there is one player who is quite pleased. Photo: Reuters

As a customer, we are not really bothered to how actually the e-commerce world functions, our only attention is on buying best discounted goods and services. The online shopping has changed the way we shop. Many have come and gone in e-commerce segment, only a few remain. Not any more! This time a new wind blows which is a good news for offline retailers, but in some ways nightmare to Amazon and Flipkart. Yes, we are talking about new FDI rule, which has tied hands of the way these two players do business. While, both e-commerce giant face hurdles from Indian FDI rules, there is a new dark horse who is placing its bets for ruling this sector. It is without any guess Mukesh Ambani led Reliance Industries Limited.

Let’s know what is this new FDI rule!

The new policy has come into effect from February 01, 2019. Few notable norms are - 100% FDI under automatic route is permitted in marketplace of e-commerce. Meanwhile, inventory of a vendor will be deemed and controlled by e-commerce marketplace entity, if 25% of purchases of such vendor are from marketplace.

With this, the government wants Flipkart and Amazon to only operate their marketplace model in India. Notably, both Amazon and Flipkart have their own wholesale unit in India, where bulk goods are sold to vendors on their platform and the vendors in return sell it to end customers. The inventory rule will not allow sellers on Flipkart and Amazon, to make bulk purchases from their wholesale units.

The rule says, “E-commerce entities providing marketplace will not directly or indirectly influence the sale price of goods or services and shall maintain level playing field.”

A Forbes India report earlier said, “behemoths Flipkart and Amazon could end up spending the better part of 2019 solving riddles posed by the government.”

On the FDI policy, Dirk Van den Berghe, Executive Vice President and Regional CEO Walmart Asia & Canada said this, "Walmart’s and Flipkart’s commitment to India is deep and long term. Despite the recent changes in regulations, we remain optimistic about the country."

One thing is clear, that both Amazon and Flipkart are not happy with new FDI rule. But there is one player who is quite pleased, and it is Mukesh Ambani as he had already showcased his vision in e-commerce market with Reliance Retail and Reliance Jio both owned by parent Reliance Industries.

In RIL’s 41st AGM meeting last year, Ambani said, “As Reliance transitions to become a TECHNOLOGY PLATFORM COMPANY, we see our biggest growth opportunity in creating a hybrid, online-to-offline NEW COMMERCE PLATFORM. We shall create this by integrating and synergising the power of Reliance Retail's physical marketplace with the fabulous strengths of Jio's digital infrastructure and services.”

Hence, Ambani says, “we will integrate the physical and digital marketplaces in a uniquely collaborative BHARAT-INDIA JODO enterprise.”

Many experts have already seen Ambani as a new rival for Amazon and Flipkart in e-commerce world, in fact they are very optimistic on his retail industry.

In Goldman Sach’s view,  RIL’s retail business is now bigger than all of India’s organized players combined in both revenue and store count. Jio subscriber addition momentum and data consumption trends remained strong. Hence, the investment banker added, “ We continue to expect consumer business EBITDA to grow by 5 times over the next three years, contributing 30% of total EBITDA in FY21E.”

CLSA expect start of full-fledged ecommerce as well as omni channel retail, increased focus on broadband, extra push on payment solutions and launch of some disruptive products from Reliance.

"Its ambitious platform listing mom-and-pop stores across the country is possibly the one to keenly watch out for. We could also see start of an extensive omni channel when all of Reliance Retail’s 10,000+ touch points including the small 5,000+ Jio points are used to generate sales and deliver products across formats and not just electronics," added CLSA.

Then there is digital and media section, where Amazon's knight-horses would be Amazon Pay, Prime Video and Alexa.In this, RIL’s trump card is Jio followed by Network 18, Indian Premier League, Money Control, CNBC TV18, viacom18, etc.

Harendra Kumar, Managing Director at Elara Capital  called Ambani as a leapfrog to global league of Jeff Bezos and Jack Ma as the market starts to discount the convergence and a new term eCommerce gets tagged to its already present retail, telecom and media.

Let’s conclude that, India’s e-commerce is going to shift drastically in 2019. Ambani has already made the fame in telecom industry with its RJio. The shocks of RJio is still unbearable for many telcos like Bharti Airtel, Vodafone Idea, BSNL, MTNL and Reliance Communication. The result is in past two years of RJio’s existence other telcos have either shut down their business or have merged within each other. For Amazon and Flipkart, they need to watch out for Reliance, because the company is known to lure customers with its majorly exciting offers.

A company working beyond forces of nature, is a company to eye for.