Redmi Note 7S to be launched in India today: All you need to know about this 48MP camera smartphone 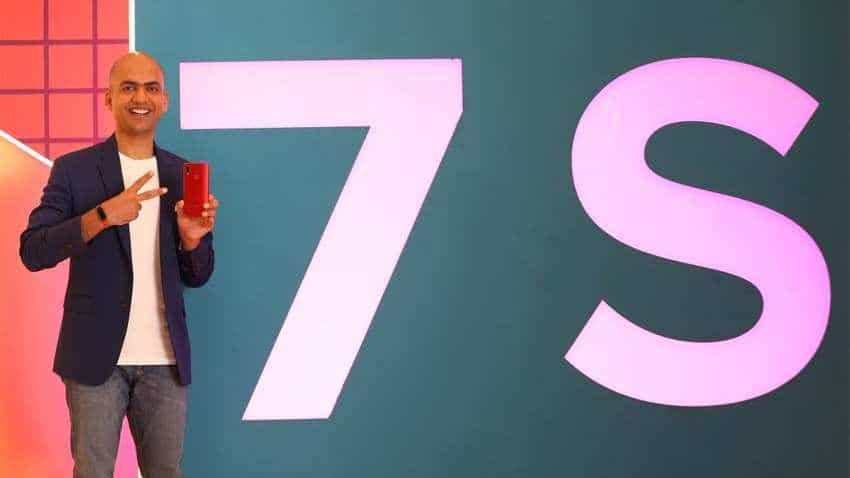 The phone is also expected to have a dot notch on the front, similar to Redmi Note 7 Pro. Source - Manu Kumar Jain/Twitter.
Written By: ZeeBiz WebTeam
RELATED NEWS

Xiaomi is set to expand its highly popular Note 7 series in India with the inclusion of its latest smartphone Redmi Note 7S on Monday. This will be Chinese smartphone manufacturer's second 48MP phone in India after the Redmi Note 7 Pro, launched earlier this year alongside the Redmi Note 7. The launch was confirmed by Xiaomi India MD Manu Kumar Jain who tweeted, "The feeling when you get your hands on #RedmiNote7S. I generally don't dress up like this, but posing with this amazing #48MP camera phone is special. How do you like this steaming hot Red coloured  Gorilla Glass 5 back? "

What to expect from Redmi Note 7S?

The features and specifications of the smartphone will be announced at the launch event. But, from the tweet and teasers released so far, it is clear that Redmi Note 7S will come with a 48-megapixel prime camera. However, it is expected to be a dual camera and the company is yet to reveal the sensor of the second camera. Xiaomi has already released some camera samples from Redmi Note 7S. The samples aim to show Note 7S’ low-light and depth sensing capabilities.

Jain's tweet also reveals that Redmi Note 7S will sport a glass back panel just like Note 7 Pro. The smartphone has Gorilla Glass 5 protection. The image posted with the tweet also confirms that the smartphone will come in a red colour option. It will have a rear fingerprint sensor on the back. The rear fingerprint sensor design is pretty much same as other Xiaomi and mid-range phones.

The phone is also expected to have a dot notch on the front, similar to Redmi Note 7 Pro. The front is also likely to have a thicker chin along with slimmer bezels on the sides. The price of the phone is expected to be under Rs 20,000, making the Redmi Note 7S a mid-range smartphone.

The Redmi Note 7S launch live streaming will be available on Mi.com and social media platforms of the smartphone manufacturer.

New motor vehicle rules to come into effect from October 1: Here are all changes you must know about

Stock market: Top 2 mistakes that you must not make in October - Anil Singhvi explains