Xiaomi has confirmed the launch of its Redmi K30 series, a successor to this year's Redmi K20 series that was positioned as a flagship killer by the Chinese smartphone manufacturer. 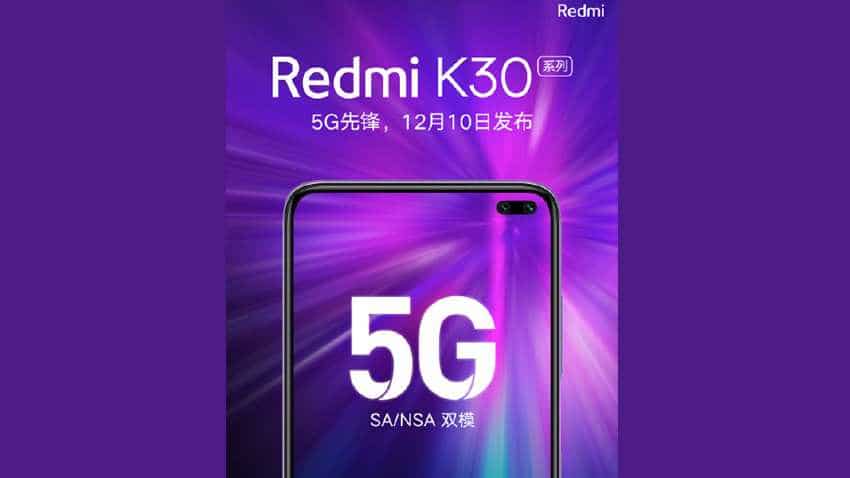 Xiaomi confirmed late Monday that it is set to launch the Redmi K30 series on December 10 in China. Source - Weibo.
Written By: ZeeBiz WebTeam
Edited By: Harish Dugh
RELATED NEWS

Xiaomi has confirmed the launch of its Redmi K30 series, a successor to this year's Redmi K20 series that was positioned as a flagship killer by the Chinese smartphone manufacturer. Xiaomi confirmed late Monday that it is set to launch the Redmi K30 series on December 10 in China. The smartphone maker also confirmed that the new series will come with 5G support, making it Xiaomi’s first phone with latest generation connectivity under Redmi portfolio. The announcement on weibo had a cutout of the new smartphone confirming bezel-less screen but with punch-hole camera housing two sensors.

Xiaomi Redmi K30 details have been leaked multiple times so far, hinting at 120Hz refresh rate and Qualcomm Snapdragon 730G chipset. The smartphone is also tipped to come with Sony’s latest 60-megapixel IMX686 camera sensor and a quad rear camera setup. In India, the Redmi K30 will compete against Realme X2 Pro which is available with 6.5-inch full HD display with 90Hz refresh rate, Snapdragon 855 Plus SoC, and a four-camera setup on the back featuring 64-megapixel sensor.

The smartphone should launch in India in the coming months. However, it is unlikely to get a 5G support in the country. To recall, the Redmi K20 series was launched in India in July. The Redmi K20 is now retailing at Rs 21,999 with Qualcomm Snapdragon 730 processor with up to 6GB of RAM and 64GB built-in storage. On the back it has three rear cameras featuring 48-megapixel, 8-megapixel, and 13-megapixel sensors. It runs on a 4,000mAh battery. Xiaomi had also launched a Pro model of the smartphone.

Earlier on Monday, Xiaomi also confirmed the launch of its 108-megapixel camera smartphone in India, tipped to be the Mi Note 10 which was launched in global markets earlier this month. The news was confirmed by Xiaomi India's CEO Manu Kumar Jain who tweeted on Monday morning that the country will soon have a smartphone with the 108MP camera sensor. "It's coming", he tweeted along with emojis that formed 108 confirming the spec.

To recall, Xiaomi had launched Mi Note 10 and CC9 Pro in global and China markets earlier this month with the 108MP Penta-lens. It is expected to bring one of these models to India as well. Xiaomi is also expected to launch the ‘Pro’ variant of the smartphone to the country as well.