Realme watch review: The Realme watch has been aggressively priced at Rs 3,999 and comes with several sports modes, 24-hour heartrate monitoring, step counter, sleep tracking and more. I have been using the watch over the last week and here is what I think of it. 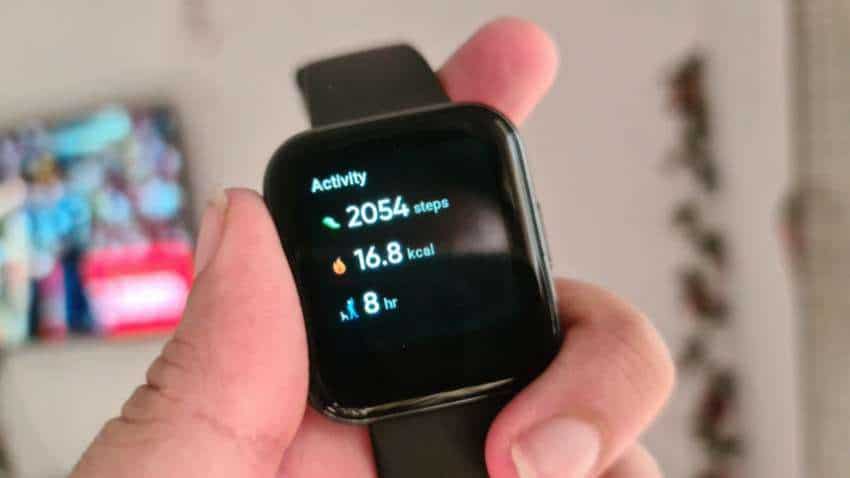 As far as basic looks go, the watch comes with a square dial, detachable straps - it is quite comfortable.
Written By: Manas Tiwari
Edited By: Harish Dugh
RELATED NEWS

Realme watch review: Fitness should be an important part of all of our lives. In fact, for some, it already is. These are strange times that we are living in and even basic exercises can make a huge difference to our health and immunity. Yes, corona pandemic has underlined the critical importance of keeping fit for everyone. Also, while exercising is important in itself, to derive the greatest benefit from it, it is important for everyone to keep a track of their daily activities and work on their regime accordingly. In this endeavour, smartwatches play a key role.

A big complaint over the years, however, has been that there are very few affordable options available in the Indian market. Rightly so. Offerings from Samsung, Garmin, Apple, Huawei and some others expect you to spend between Rs 25,000 and Rs 30,000 for a complete product.

Among others, Realme has tried to fix this problem with the launch of its new smartwatch – Realme watch – unveiled in the Indian market late last month. The Realme watch has been aggressively priced at Rs 3,999 and comes with several sports modes, 24-hour heartrate monitoring, step counter, sleep tracking and more. I have been using the watch over the last week and here is what I think of it.

The Realme watch looks very similar to the Apple watch. A lot has already been said about it and I don’t want to address this aspect because as long as the watch serves its purpose, it doesn’t matter what it resembles. 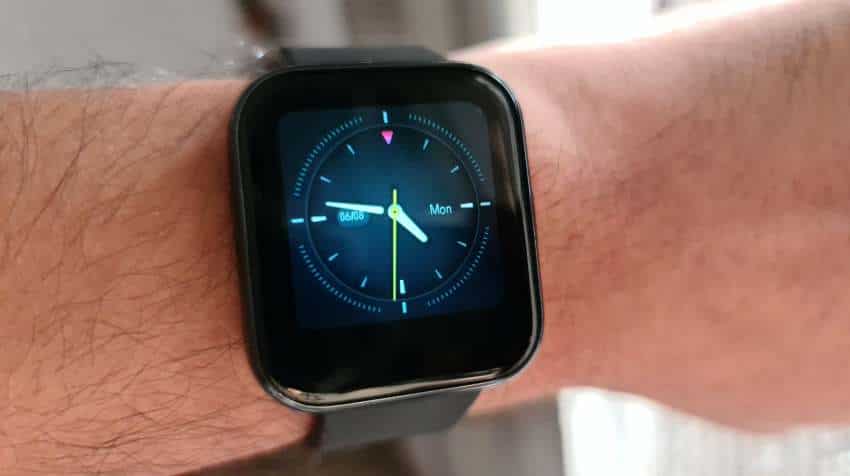 As far as basic looks go, the watch comes with a square dial, detachable straps - it is quite comfortable. You get a single physical button on the right side of the watch. This button is your one stop destination for all tasks. It allows you to lock-unlock the watch, navigate and more. On the back you get heart rate tracking sensor along with pop-pins for charging.

Realme watch comes with black colour straps out of the box but the company is selling multiple color options which could be bought by paying some extra bucks.

The hack to make any affordable product is to make it appear more expensive than what it actually costs. This is a trick that Realme has missed. While the quality is decent, you could figure out that it is a budget watch with no premium look attached. The strap quality is also fine but you could feel that it’s not the best. 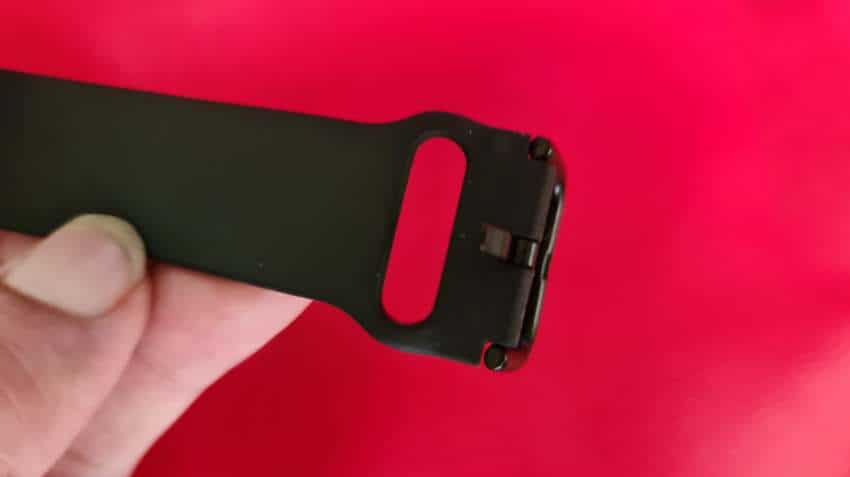 A big change in design comes in form of the cavity that is provided in the strap which provides a tight grip and adds to the overall comfort. Also, the Realme watch is extremely lightweight which makes it easy to wear for long hours.

The Realme watch features a 1.4-inch coloured touch display with a screen resolution of 320×320 pixels. Unlike the Realme band, here you have the option to adjust the brightness by every 10 per cent – from 10 to 100. The screen looks really good indoors but struggles in sunlight even with full brightness. This, however, is only a problem at the peak hours and the display looks fine towards the latter half of the day or in evening. 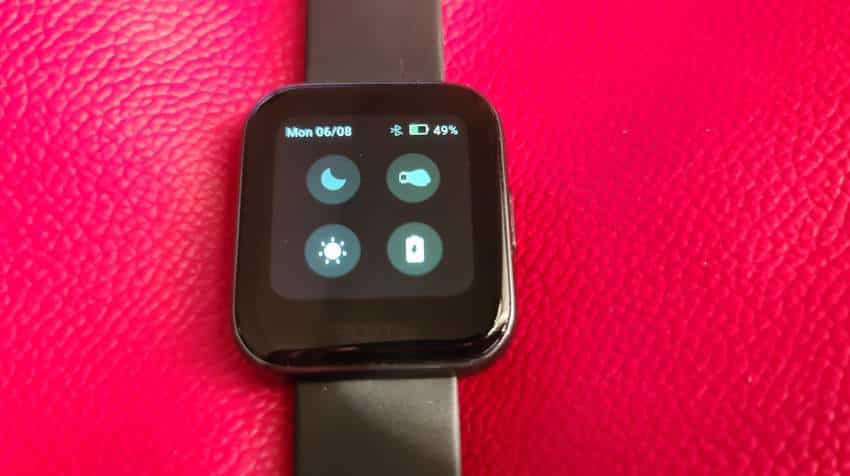 The bigger problem though are the bezels. Even though Realme is promoting this watch for slim bezels, this isn’t the case. The chin is especially quite thick and could have been reduced.

The text on the watch seems crisp and clear. The screen responds well to touch. So, there is no problem in terms of functionality and you can expect a smooth experience. The watch comes with 12 watchfaces – six on the watch and others on the Realme Link App. The company further plans to roll out 100 watchfaces through an update.

When will that happen? Not clear as yet.

An important part of your overall experience with the watch is the Realme link app. In fact, to get the watch started, you need to download the app through Google Play Store and connect Realme watch to it. The app allows you to change watchfaces, edit settings, update the firmware and a lot more.

It has a very clean user interface and pretty much guides you through the process. All the important data including the number of steps, sleep, heart rate, SpO2, and exercise logs are available on the home screen. Even if your watch gets disconnected, the data is updated when paired again.

Coming to the features, you basically get everything that a fitness band offers, just on a bigger screen. The watch has 14 sports modes including Indoor and Outdoor run, Walk, Outdoor and Indoor cycling, Aerobic Capacity, Strength training, Football, Basketball, Table Tennis, Badminton and Cricket. 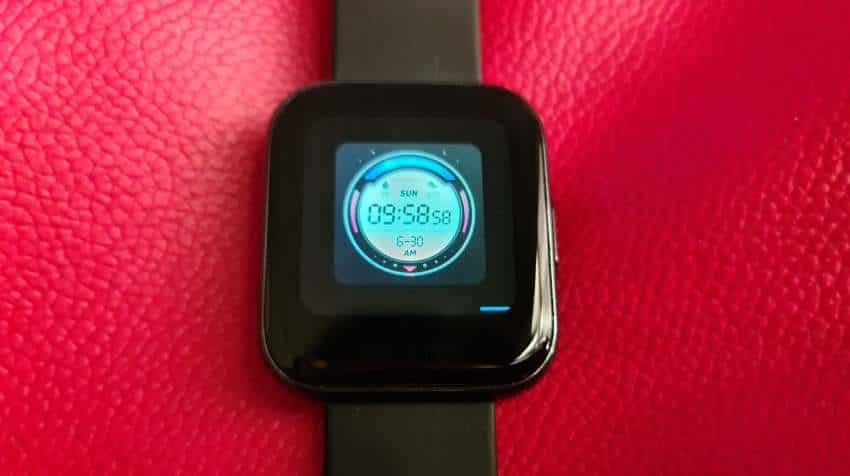 There are also features such as sleep monitoring, heart rate monitoring, drinking water, and SpO2. These are particularly important for fitness enthusiasts. The sleep and heart monitoring also seemed pretty accurate but only take readings when the watch is tightly strapped around your wrist.

There was no way for me to test these features in full. The gyms are still closed, there are COVID-19 cases in the area I live in so it’s better to stay indoors and there’s a limited activity you can do at home. Yet, I tried to test as many features as possible. 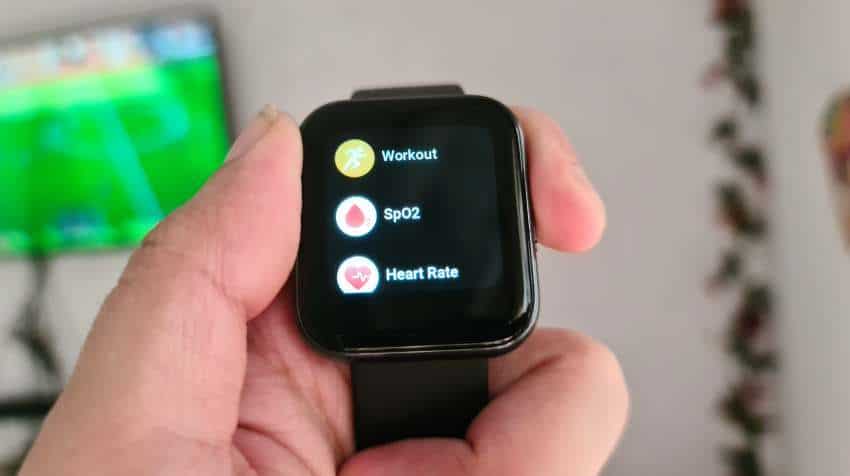 The first time I put on this watch, I went for a long walk. Surprisingly, the step counter at the end of it read 13. This was obviously incorrect. Since then the readings have been pretty accurate.

The other features on the watch include notifications, ability to unlock phone, control music and take photos. The watch can receive almost all app notifications and supports the display of calls. The inability to receive calls from the watch only partially solves the purpose but it is a feature you are unlikely to find at this price point anytime soon.

The sleep tracker also comes with some limitations. While it informs you about the sleep cycle, there are no suggestions on how to improve it. 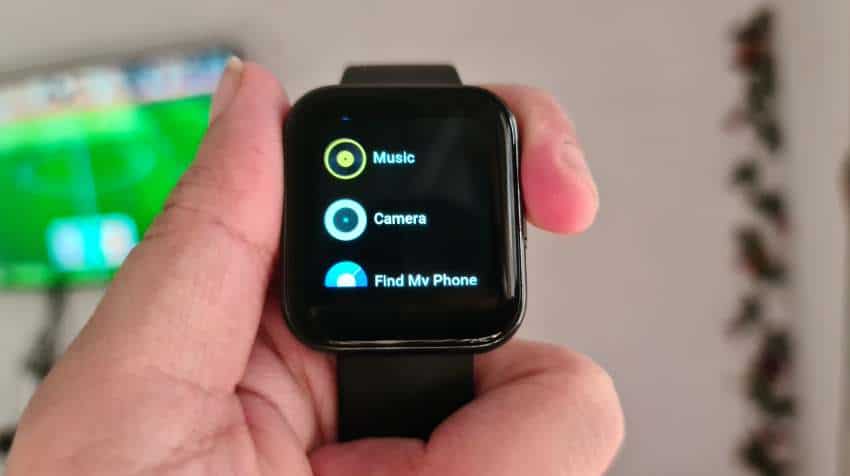 Moving on to the battery, the Realme watch packs a 160mAh battery and uses a magnetic pogo-pin charger. It claims to offer about 7 days of battery life. After using the watch for about four days, I still had around 30 per cent battery left, which means you can expect around five to six days of battery in total.

Realme watch review: Should You Buy?

The Realme watch reminds me of a scene from ‘Eddie: The Eagle’ where Brosnon Peary aka Hugh Jackman tries to talk some sense into Eddie aka Taron Egerton, asking the latter to delay his participation in Winter Olympics by four years to enter the competition as a contender and not just another contestant. Of course, Eddie doesn’t agree and goes on to represent Great Britain in Olympic ski-jumping.

Realme has done something similar. On paper, it has launched its first smartwatch, positioning it in a highly aggressive bracket. But in reality, the Realme watch majorly offers you features of a fitness band with the form factor of a smartwatch.

To Eddie’s credit, he created some buzz and had a following of his own. Will Realme do the same? Time will tell. As far as you are concerned, if fitness is the priority, you can buy a fitness band and save some bucks. But, if it’s a smartwatch that you want specifically, then the Realme watch is not a bad bet either.