Realme Buds Wireless Pro review: The earphones come with some impressive features on paper like transparency mode, low latency mode, IPX4 water resistance, and fast charging. But, as I always say – you need to be more investigative before buying a product when it is offering too much for too less. 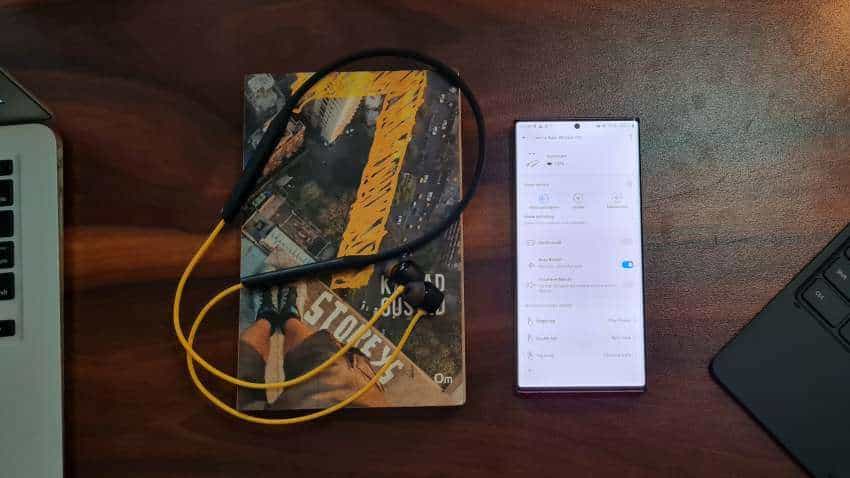 The Realme Buds Wireless Pro sport a familiar design language, used on the previous earphones by the company as well.
Written By: Manas Tiwari
Edited By: Harish Dugh
RELATED NEWS

The earphone succeeds popular Realme Buds Wireless neckband-style earphones and come with some impressive features on paper like transparency mode, low latency mode, IPX4 water resistance, and fast charging. But, as I always say – you need to be more investigative before buying a product when it is offering too much for too less.

I have been using the Realme Buds Wireless Pro for a week now and here is our review of the same.

The Realme Buds Wireless Pro sport a familiar design language, used on the previous earphones by the company as well. The earphones have been launched in two colour variants – Party Yellow and Disco Green. We had the first for review purposes that flaunt company’s design language of Black and Yellow. The touch of yellow on the wires and control buttons make the earphone slightly refreshing against the monotonous colour options available in the other market. 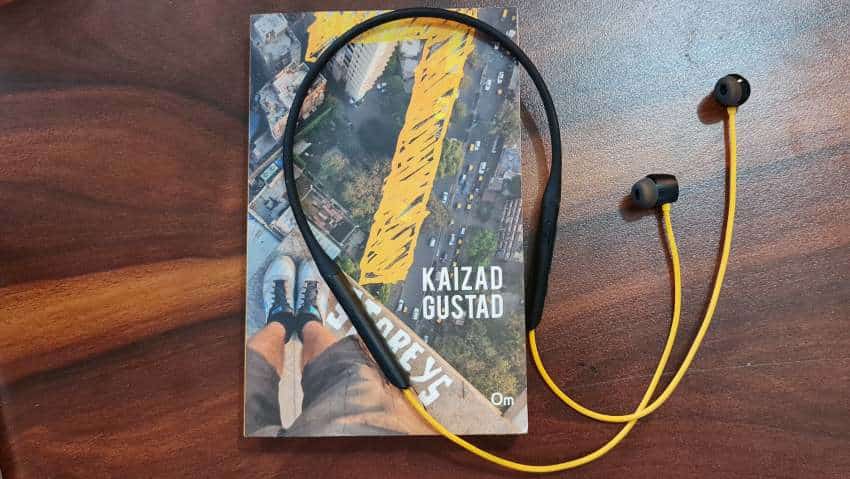 The overall design concept is also similar to the Realme Buds Wireless. The manufacturer has stuck to a flexible rubber neckband design which connects to yellow rubber cables and plastic earbuds. The buds have a glossy and matte dual texture.

The neckband is plain from one side and features the control buttons on the other. These include – volume controls, a multi-function button, a Noise Cancellation Button and an LED light. Right next to the buttons, you can also find the Type-C USB charging port which is covered by a flap.

Moving down the neckband, you get the yellow-coloured tangle-free wires which have the plastic buds at each end. Both the buds come equipped with magnets that connect them and also perform the power on/off feature. For those unfamiliar with this feature, the earphone turns on as soon as you separate the buds from each other. Attaching them back, switches off the earphone. 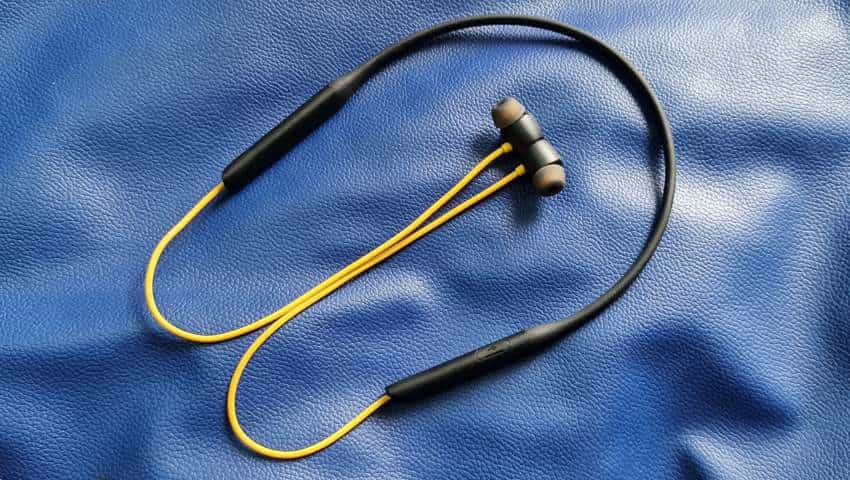 If you have used an earphone which supported this feature, the experience becomes seamless and convenient. If you haven’t, it will take some time before you get used to it.

Overall, while the design is something that we have seen in the past, the build quality is quite good for the price. Realme hasn’t made much compromise with the quality of material, the neckband weighs only 33 grams and the colour scheme should appeal to the youth.

The neckband is also very comfortable to wear and carry around. The lightweight ensures that you can wear it for a longer duration while the eartips don’t cause any discomfort in the ears. The buds on the neckband are slightly big though, especially when compared to what we saw on the OnePlus Bullets Wireless Z earlier this year. But, that shouldn’t make much difference to your use experience. 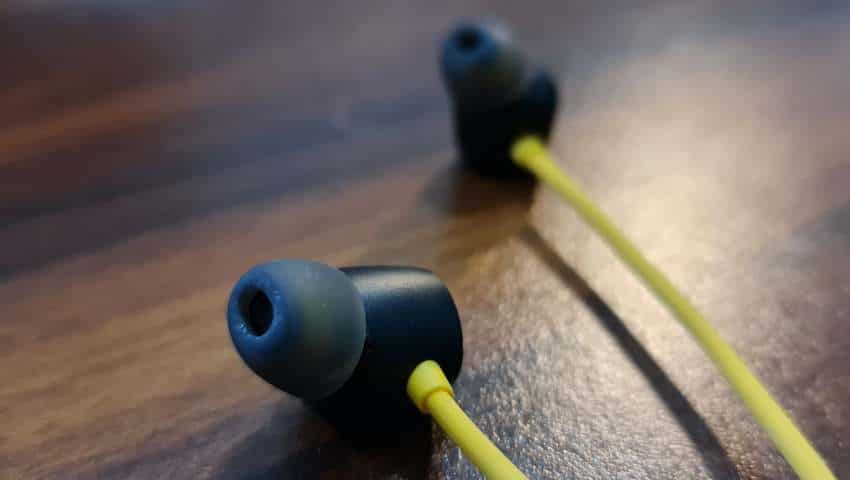 Realme provides a total of three pairs of eartips – one already attached to the buds and two in the box. That gives you the luxury of adjusting the fit as per requirement.

The Realme Buds Wireless Pro cover almost all bases when it comes to features. There is of course the much talked about Active Noise Cancellation or ANC which we will talk about in detail. The earphones use company’s customised S1 noise-cancellation chip which Realme claims is capable of reducing noise up to 35dB. Then, there is a low latency mode for gaming, Google Fast Pairing and an IP rating.

The new Realme buds are powered by large 13.6mm dynamic drivers with LDAC, AAC and SBC codec support. The notable addition here is the LDAC codec which allows streaming high-resolution audio over Bluetooth connections at up to 990 kbps at 24 bit/96 kH .This is another feature which is usually found on the high-end audio devices. 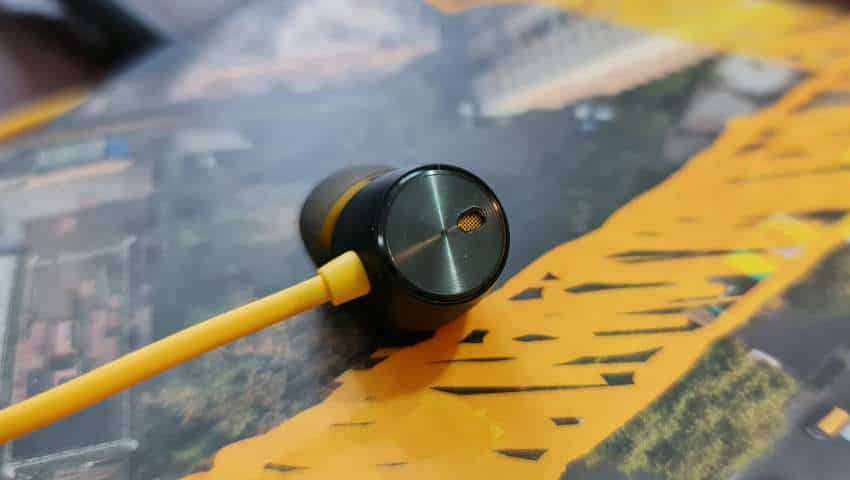 I used them with both Samsung Galaxy Note 20 Ultra and Apple iPhone SE (2020) via streaming apps and with LDAC, on the Android smartphone.

The Realme Buds Wireless Pro sound commendable for the price. They continue to produce punchy bass and clear lows and mids. In tracks like ‘Kasoor‘ by Prateek Kuhad and ‘Never Enough’ by Lorean Allred, you can feel the impactful lows and mids with details in instruments. It’s the highs that are a bit of a problem.

Now, the Realme Buds Wireless Pro are loud. And, when I say this, I mean they are really loud – to an extent that audio feels harsh at full volume. In fact, anything above 75 per cent felt unbearable after a point. Also, the separation is very poor as the volume goes up. You can clearly feel the overlap between the instruments and vocals.

This was obvious in tracks like ‘In the End’ by Linkin Park where the highs sounded way too harsh. The vocals were almost lost in the instruments as the volume neared full. Apart from that, there is not much to worry about. 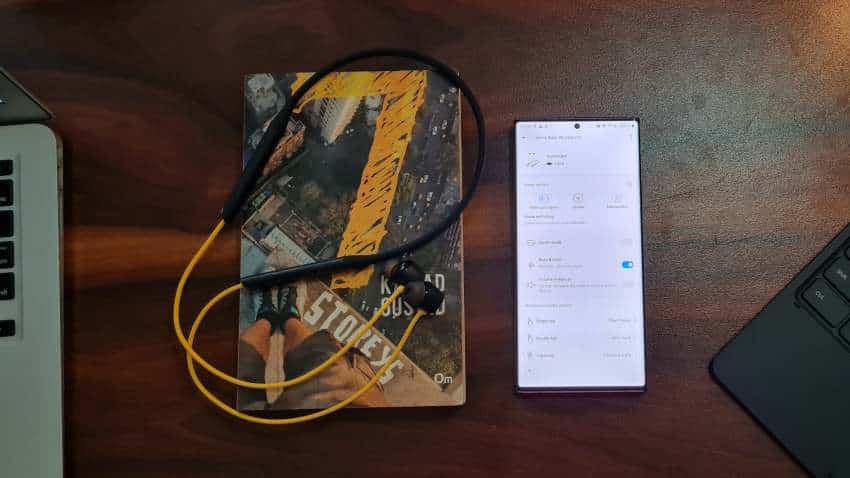 The first major concern with the Realme Buds Wireless Pro is that they don’t go deep in your ears and fail to create a natural vacuum. This leaves scope for external noise to slip in. This is why the ANC efficiency is more important. The earphones use one feedback and one feed-forward microphone to provide noise cancellation. Realme also promises ENC or Environmental Noise Cancellation during phone calls. The earphones are also equipped with a Transparency Mode that allows some ambient noises if you want to be more aware of the surroundings.

The ANC is not the best I have experienced, it does its job, especially these days when you are at home and disturbances are limited. I felt clear difference in sound quality with Active Noise Cancellation turned on. And, this isn’t in the most positive sense. The ANC almost tapers with the audio quality of the earphones, with some tracks sounding faded.

One huge positive is that sound quality is considerably better with LDAC than AAC or SBC. But, you need to turn it on by going to the Bluetooth settings. 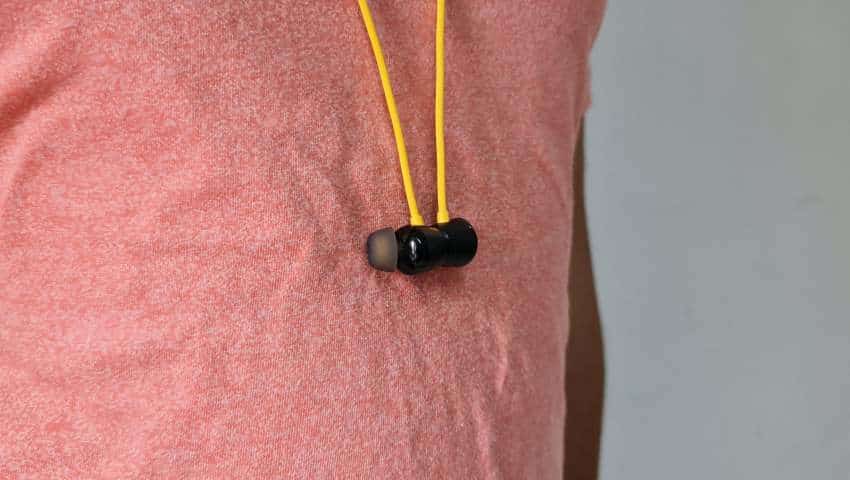 Unlike most earphones that struggle during gaming, the Reale Buds Wireless Pro do a great job with the 119ms Low Latency Gaming Mode coming into play. There is almost negligible lag while playing multiplayer online games like Call of Duty: Mobile.

Lastly, the earphones also come with IPX4 splash resistance which means you can use them while exercising or during runs. However, as we mentioned before the buds don’t go deep in the ears, so you will have to re-adjust them frequently.

For the first time users, you simply need to separate the two buds to put them in pairing mode. The earphone connects with the smartphone in no time but requires linking to Realme Link App for access to more advanced features and customizations. Now, while the app allows you to do a lot with the earphones, there is no option to change EQ, which is a major disappointment. Also, the app is only available for Android users. 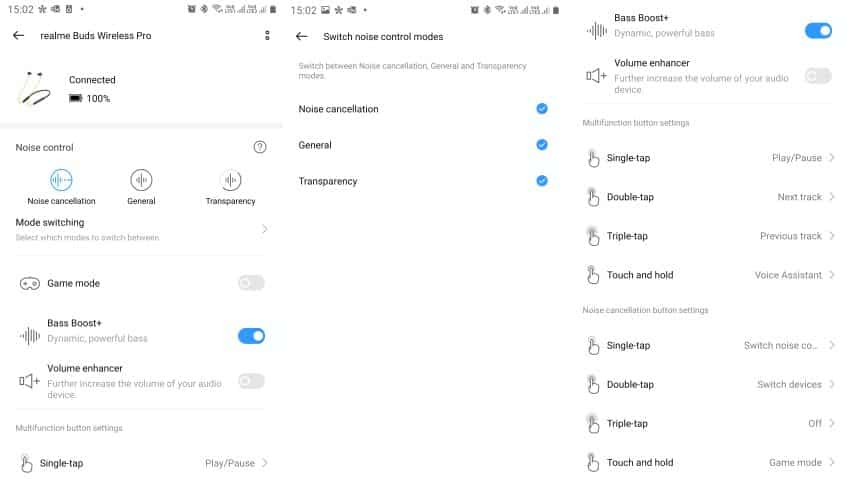 At this point, it is worth mentioning that while Realme is doing a great job on hardware front, launching more products than anyone else, greater attention needs to be given to software and supporting services. 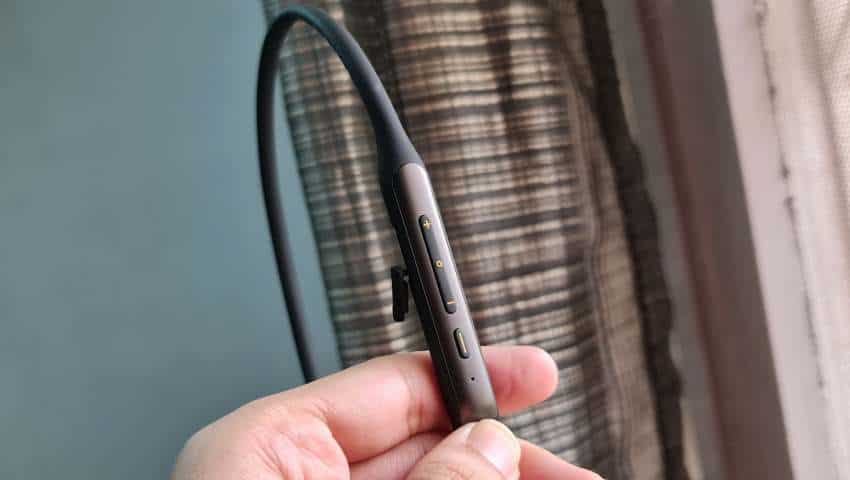 Moving on, there are easy control buttons on the neckband. The volume buttons do the usual job, the multifunction button in the middle pauses/plays music and answers/declines phone calls and the Noise Cancelling button can be used to switch between ANC, Transparency Mode, and Normal mode. Long pressing the last also activates the Game Mode.

The Realme Buds Wireless Pro house a 160 mAh battery which is claimed to last for 22 hours, without ANC. With noise cancellation on, you can suck at 16 hours of battery life from these earphones. I spent a week with the earphones during which I used them for an hour or two on daily basis and am yet to charge them. 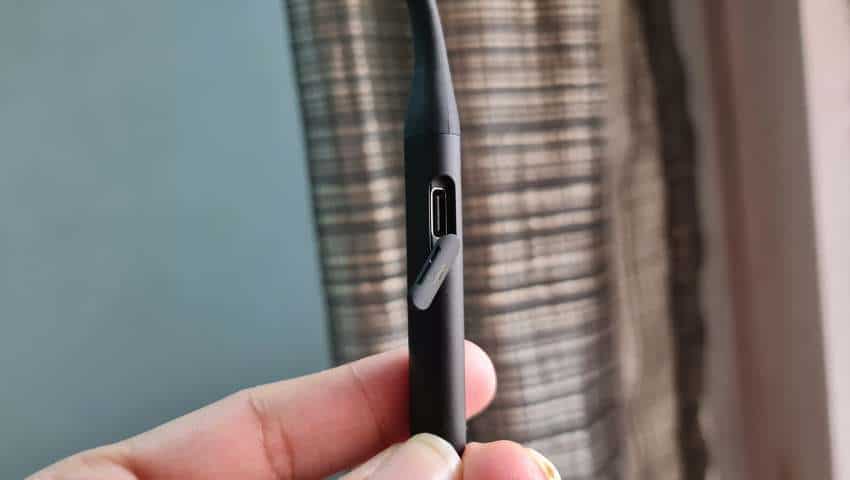 Along with this, Realme is also giving Fast Charge support, where 5 minutes of charge nets you about 100 minutes of playtime. Additionally, you can charge the earphones to full in about an hour and a half, which proved to be pretty accurate as per our tests.

The Realme Buds Wireless Pro are lightweight, have a very impressive Game Mode, produce decent sound quality, come with LDAC support and a solid battery life of 22 hours. They tick almost every single box if you are looking for a budget-friendly pair of Bluetooth earphones. But most importantly, they democratize the Active Noise Cancellation – a feature that has remained a luxury for long.

If I have to point out negatives, they would probably be a slight lose fit, average sound performance with ANC turned on and harsh handling of highs. Realme’s masterstroke here is pricing the Wireless Pro at Rs 3,999 and further offering them at Rs 2,999 till Diwali.

The problem is, there are no wireless earphones that support ANC in this price range. This makes it very difficult to compare the performance and leaves customers short of options. So, if ANC is your preference without spending much, you can definitely consider the Realme Buds Wireless Pro.