The Realme 3 Pro 8GB variant is expected to be price tagged at around Rs 18,000. 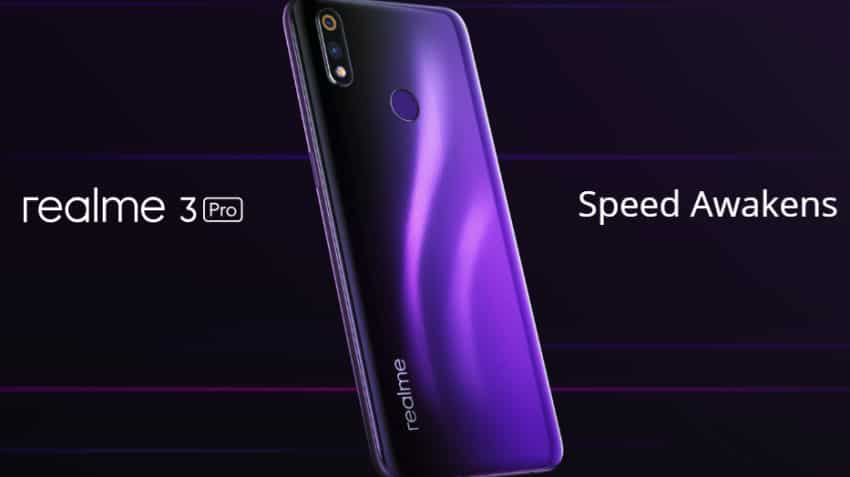 The smartphone is set to go on its first sale in India on April 29, on various platforms including e-commerce platform Flipkart. Photo:Realme official Website
Written By: ZeeBiz WebTeam
RELATED NEWS

The Chinese smartphone manufacturer Realme unveiled the latest addition to its smartphone range, the Realme 3 Pro on April 22, 2019. Realme boasts this smartphone as their best budget friendly device. The company has now announced that it will soon be releasing the 8GB RAM variant of Realme 3 Pro by July. The phone is expected to be priced at around Rs 18,000. The Realme 3 Pro is currently available in two variants, the 4GB RAM+64GB ROM and 16GB+128Gb ROM. The smartphone is powered by Qualcomm Snapdragon 710 AIE processor and runs on Android 9.0. The phone measures 156.8mm x 74.2 mm x 8.3 mm and weighs 172 g.

The smartphone sports a AI front camera of 25MP while having a dual rear camera set up of 16MP+5MP. The rear camera's also features nights-cape, ultra HD, chroma boost, portrait mode, expert mode and HDR while the selfie camera has the attributes of AI Beautification and AI Facial Unlock.

The Realme 3 Pro has a battery capacity of 4045mAh. Moreover, it comes with a promising VOOC fast charging system. The phone's body is available in three colour variants, namely, Lightning Purple, Nitro Blue and Carbon Grey.

The smartphone is set to go on its first sale in India on April 29, on various platforms including e-commerce platform Flipkart. The 4GB+64GB ROM variant of Realme 3 Pro is priced at Rs 13,999 while the 6GB RAM +128GB ROM is available at Rs 16,999.