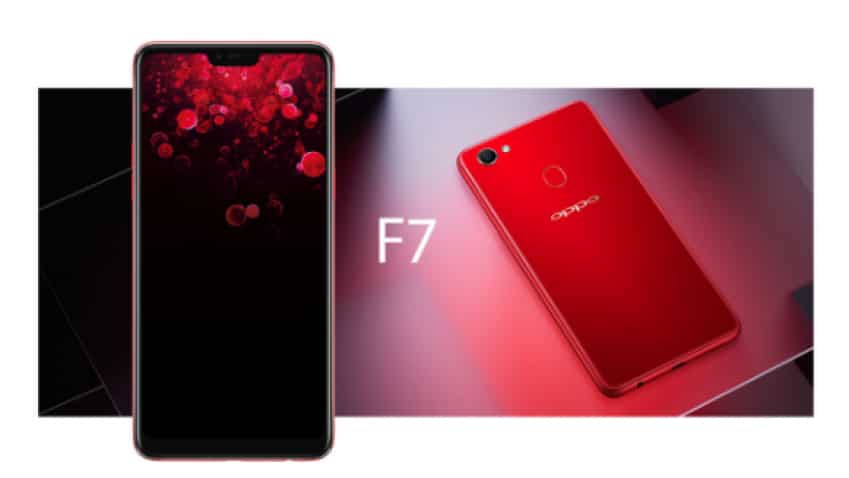 The new F7 smartphone follows the new trend of having a screen with 19:9 aspect ratio -- a notch above the display that we first saw on the Apple iPhone X. Image source: company website
Written By: IANS
RELATED NEWS

Moto G6 Plus vs Oppo F7: Which one suits your pocket best?

Chinese handset maker OPPO introduced its photo-focused "F" series in January 2016. The company has now refreshed the line-up with F7 at Rs 21,990 for the selfie-loving generation. OPPO is among the few of those credited with starting the selfie-centric smartphone craze. The effort paid off well and OPPO has been refreshing its "F" and "A" series from time to time in the country. The new F7 smartphone follows the new trend of having a screen with 19:9 aspect ratio -- a notch above the display that we first saw on the Apple iPhone X.

Aggressively priced at Rs 21,990, OPPO F7 essentially competes with the newly-launched Vivo V9 that sports similar specifications. How does the smartphone fare in daily usage? Here`s the verdict.

The design and build of the new F7 is a welcome change from what we saw in previous iterations of OPPO`s "F" series devices. The company has done away with full metal-body design in favour of an all-plastic body that makes it very lightweight to hold and look flimsy at the same time.

At a first glance, it would look like a glass sandwich design but OPPO has accommodated a piece of polymer composite material on the rear.

Similar to other "notched" Android devices, the F7 also has a smaller notch compared to iPhone X which houses the sensors, the earpiece and a 25MP selfie camera with F/2.0 aperture.

The device has Artificial Intelligence (AI) beauty (for the front camera) feature and sensor HDR capabilities.

The self-portraits came out nice and we liked the option wherein we could manually choose the level of beautification for clicking selfies.

The 6.23-inch LCD IPS display with full HD+ resolution has been housed in normal-sized package thanks to the 19:9 aspect ratio that gives more screen space for viewing.

The display was sharp with on-screen navigation keys. However, the keys usually hide while using full-screen apps, to be brought back with an upward swipe from the bottom of the screen.

Unlike its closest competitor, the Vivo V9, Oppo F7 uses a 16MP single sensor. However, it clicked decent images in adequate lighting conditions.

We particularly liked the alternative to ditch the on-screen navigation keys. The gestures, when activated, gave a better overall experience.

The rear camera`s performance was pretty weak in dim-light conditions. Lack of 4K-video recording is another put off. Also, the device lacks dual rear cameras unlike Vivo V9.

OPPO has also skipped a USP-Type C charging port -- which is the trend today -- in favour of the dated Micro-USB port in the F7.

Conclusion: OPPO F7 is a decent smartphone that should appeal to most selfie-focused users who want more screen space in a traditional 5.5-inch device.

Moto G6 Plus vs Oppo F7: Which one suits your pocket best?