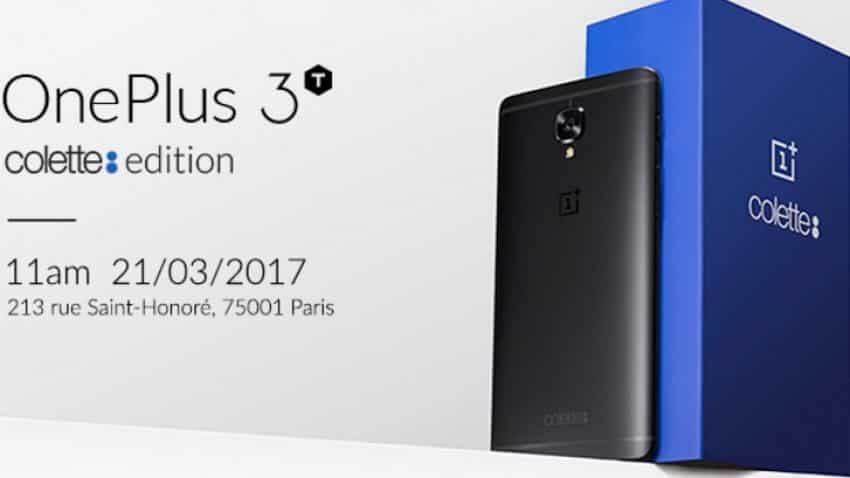 The company further added that on a first-come-first-serve basis customers would get a free pair of OnePlus Bullets earphones to go along with the phone. Image Source: Company website
Written By: ZeeBiz WebTeam
RELATED NEWS

After building up suspense about its latest new variant of the OnePlus 3T on social media, Chinese smartphone maker launched its OnePlus 3T Colette limited edition on Wednesday.

The company started off with a series of tweets announcing that it would be pairing up with French fashion accessories maker, Colette which lead to the countdown of the launch.

It’s about to get real. pic.twitter.com/nHmDyTEnFF

120 minutes to go. Are you ready? pic.twitter.com/4bmow9nGyK

“Our latest device epitomizes our work with colette, reflecting our shared attention to detail and devotion to experiences of unparalleled quality,” the company said in a release on Wednesday.

OnePlus said that the new limited edition phones were ‘painstakingly designed smartphones,’ and the company would open its doors to sales on March 21 in Paris, France at 11am.

The company further added that on a first-come-first-serve basis customers would get a free pair of OnePlus Bullets earphones to go along with the phone.

The 128GB storage variant has been priced at 479 Euros, approximately Rs 33,500 and the company said only 250 units will be available for sale.

Details of the phone being available in other countries have not been announced by the company.

In an earlier report Zeebiz had speculated the device to be blue in colour; however, the soon to release phone will be available in black with Colette’s logo engraved at the back.

The phone will have the same specifications as the OnePlus 3T which was launched at a starting price of Rs 29,999 and came in both 64GB and 128GB storage space.