OnePlus 7T review: Everything you wanted at an affordable price point

OnePlus 7T review: Priced at Rs 37,999 for the base variant, the OnePlus 7T brings the back the smartphone maker to a familiar territory which it had ditched for the Pro model. Where does it stand in the OnePlus family and against the competition? Let's find out. 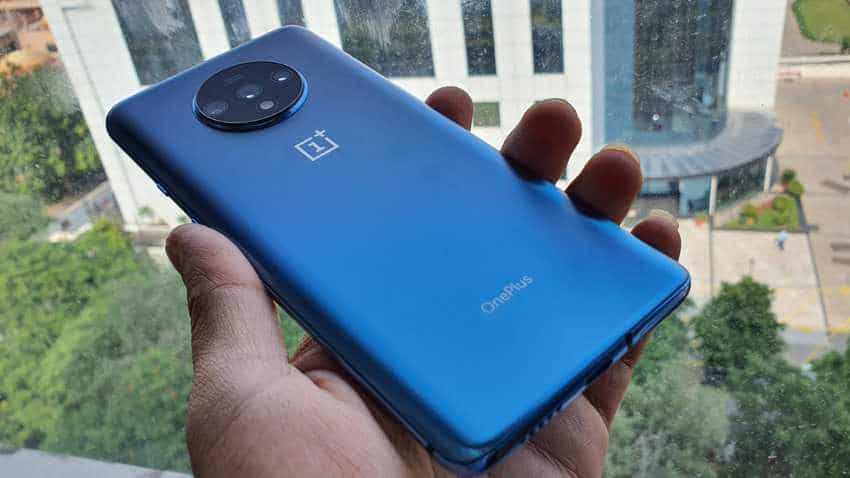 OnePlus 7T review: Following the tradition, OnePlus has launched the 'T' version of its last smartphone - the OnePlus 7 in India, placing the new offering between the standard and Pro variant of the same. The OnePlus 7T comes a little over four months after the company had unveiled its 7 series in the country and while it might raise some eyebrows, the new smartphone was much-needed to bridge the gap between OnePlus 7 and OnePlus 7 Pro, both in terms of price and features offered. The OnePlus 7T is only the second smartphone to come with Qualcomm Snapdragon 855+ processor in the country, sports a new and refreshing design and has borrowed several features from the OnePlus 7 Pro at an affordable price point.

Priced at Rs 37,999 for the base variant, the OnePlus 7T brings the back the smartphone maker to a familiar territory which it had ditched for the Pro model. If you go by the processor, its only competition in the Indian market right now is the Asus ROG Phone II which is primarily a gaming smartphone or let's say, designed for gamers. The latter packs a massive 6000 mAh battery, making it heavier and not-for-everyone smartphone. 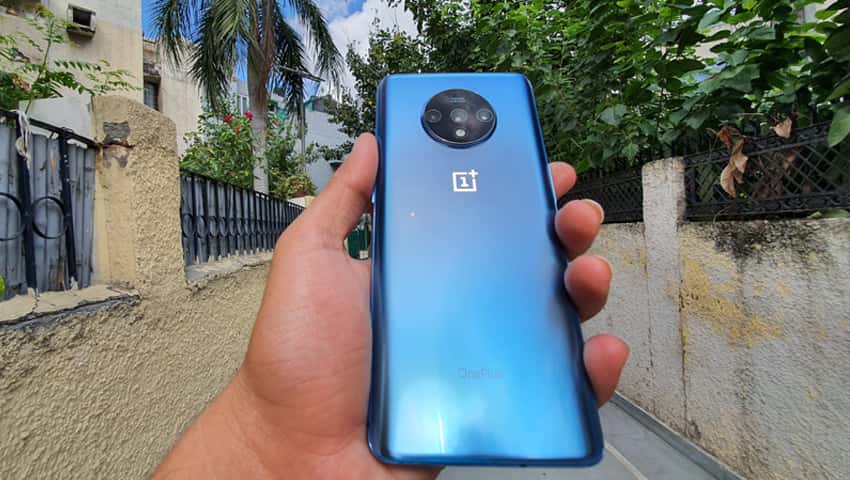 Apart from this, the OnePlus 7T also competes against the Asus 6Z, Redmi K20 Pro, Oppo Reno 2 and Samsung S10, offering better specs on paper than almost all those devices. This also makes things a bit more complicated for the buyers as for the first time, OnePlus is selling so many devices in India. While the 7 series is the latest offering, the older devices too, have not been discontinued. Also, the company is already gearing up for the OnePlus 7T Pro which is expected to be unveiled on October 10.

With so many OnePluses available in the market, is it wise to spend of the OnePlus 7T? Where does it stand in the OnePlus family and against the competition? Let's find out in our OnePlus 7T review.

When OnePlus CEO Pete Lau had shared the first ever image of the OnePlus 7T with that circular camera module at the back, I thought that the company has made a grave mistake and has given invitation to online trolls and memes. For some reason, the circular camera module hasn't worked for most smartphone makers. But, this is where OnePlus proves you wrong once again by offering one of the most stunning devices of the year that draws instant attention. The camera module blends well with the matte-textured glass finish to complete a refreshing design. 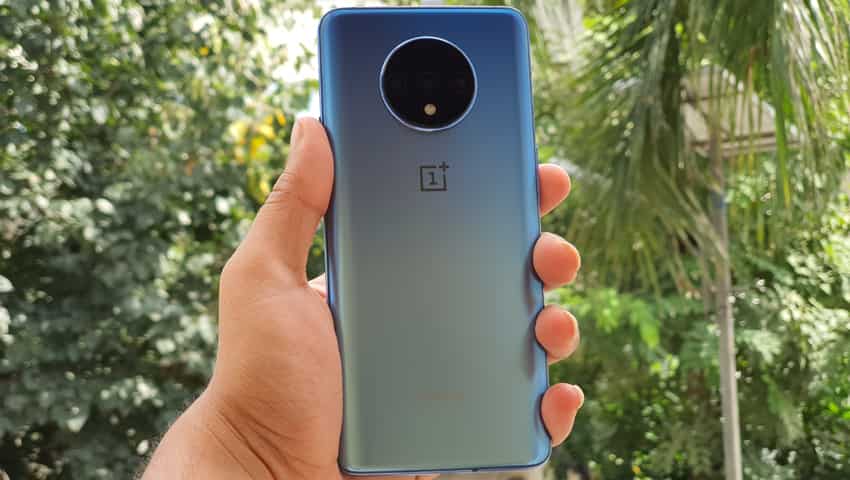 The OnePlus 7T has been launched in two colour options - Glacier Blue and Frosted Silver. If the previous launches are to go by, the company might introduce more colour options in the coming months. For review purposes, we had the Glacier Blue colour variant that comes to full glory in outdoor conditions. It basically changes gradient depending on the angle of the light and doesn't attract too many fingerprint smudges either. The smartphone looks premium, feels premium and is class apart from other flagships. 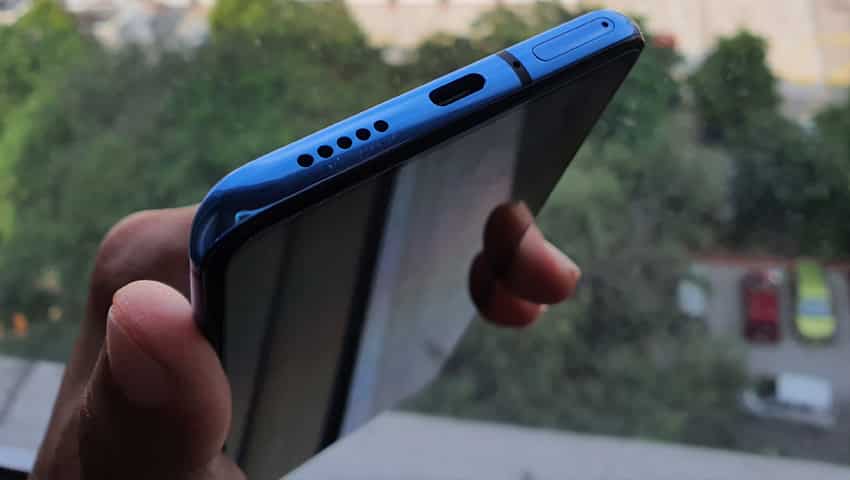 OnePlus has ditched the pop-up camera module and has stuck to a waterdrop notch. This is actually good as the pop-up mechanism only adds to the thickness of the device. Despite the notch, OnePlus has managed to keep the bezels at minimum and offers more than 95 per cent screen-to-body ration which should only be second to what Samsung is offering with the Note 10 series.

The volume rocker is present on the left side of the phone while the power button and alert slider are on the right. The dual SIM tray and USB Type-C port are on the bottom. While all the buttons are in reach for a single hand use, both the rear panel as well display used are slightly slippery, making it difficult to maintain a solid grip. 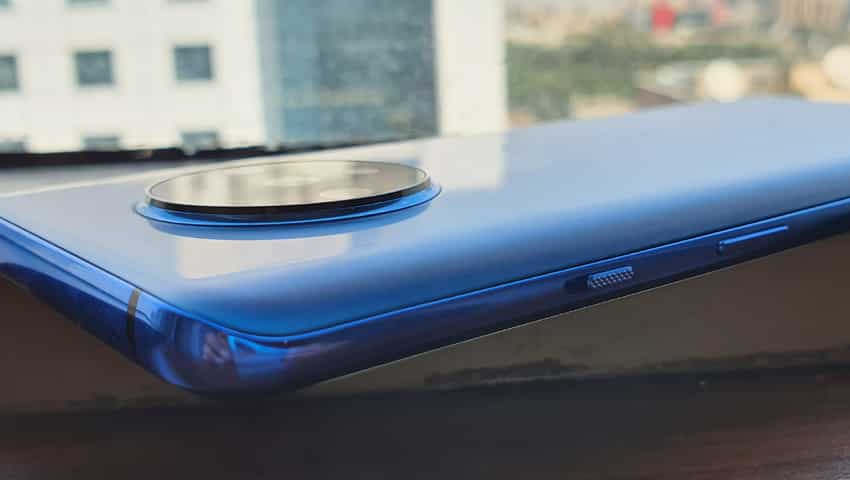 At 190 grams, the smartphone is slightly heavy but easy to handle and carry. The device is protected by Corning Gorilla Glass on either side and comes with a pre-applied screen protector.

The OnePlus 7T features, what the company is calling, a 6.55-inch Fluid AMOLED display that comes with FHD+ (2,400 x 1,080 pixels) resolution, 402 PPI pixel density, and 20:9 aspect ratio. Along with this, the smartphone also comes with 90Hz fast refresh rate which OnePlus has announced, will be used on all its future devices.

The OnePlus 7T offers a highly impressive and super smooth touch experience. You can browse through the menu, switch between the apps and type seamlessly. This is where the refresh rate also makes a major difference apart from the display which also supports sRGB, and Display P3 color profiles. It comes with 1,000 nits peak brightness that helps you use the phone without trouble in bright daylight. 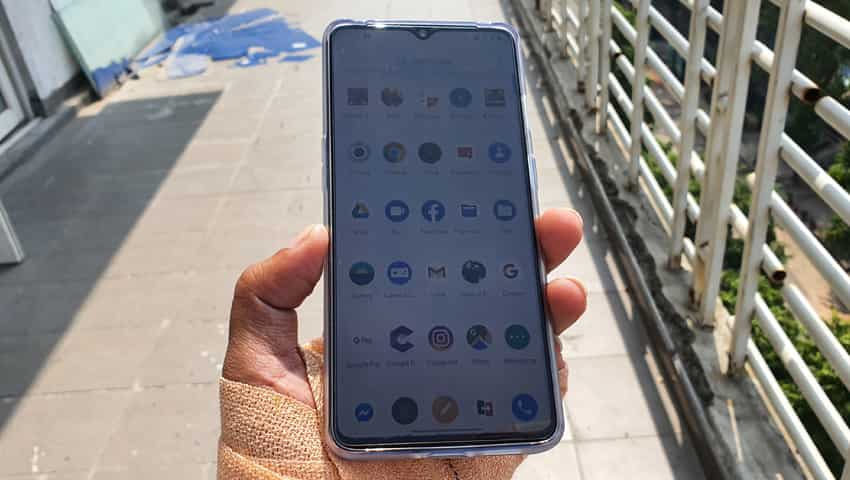 OnePlus 7T review: The Magic of 855+ chipset and Oxygen OS

Ahead of the launch, the company had confirmed that OnePlus 7T will come with Snapdragon 855+ processor that offers 2.96GHz high-performance Kryo 485 CPU and claims to provide 15 per cent faster performance than Snapdragon 855. OnePlus has used the same 8GB RAM on both the models of this smartphone. This makes your job easier as you only need to decide between 128GB or 256GB of storage. These two variants are priced at Rs 37,999 and Rs 39,999, respectively.

Since the storage on device cannot be expanded using a microSD card, it would be better to buy the 256GB storage variant as the difference in price is also just Rs 2,000.

To test the performance of the OnePlus 7T, I downloaded few heavy gaming titles like PUBG: Mobile (which is now the gold standard for testing any smartphone's performance), the newly launched Call of Duty: Mobile and Brother in Arms. All the games ran perfectly fine even on higher settings. Still, if you are a gaming enthusiast and are looking for a device entirely for gaming purposes, Asus ROG Phone II makes for a better option. 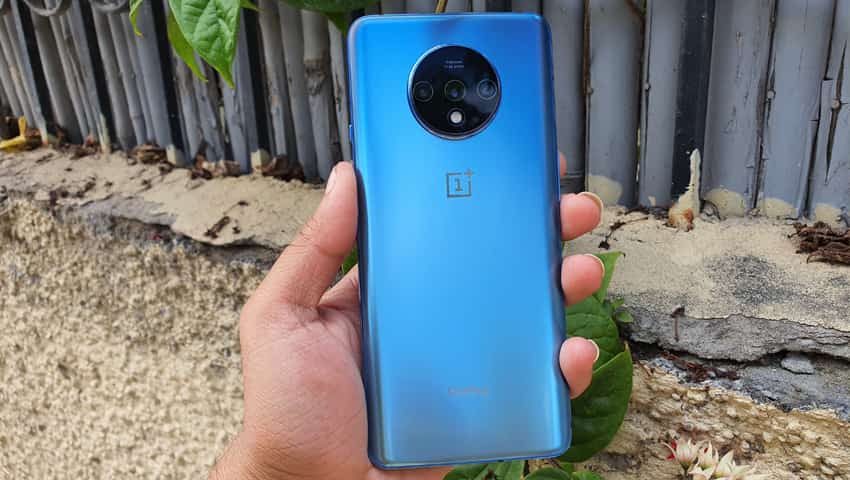 Just like the previous models, OnePlus 7T also comes with an in-display fingerprint sensor which is lightening quick.

It is the first smartphone to come with Android 10 out of the box in India. But, the real highlight of the device is the OxygenOS 10 UI. The operating system distinguishes OnePlus smartphones from any other device in the market. The UI allows you to set customised themes, apply gesture controls and also has a dark mode. There are very few unwanted apps pre-installed on the device which is no less than a blessing. It makes the smartphone look clean and easy to use.

Coming to the part that most OnePlus users are excited about, this smartphone offers a triple rear camera setup that includes a 48-megapixel primary shooter with wide f/1.6 aperture assisted by a secondary 16-megapixel lens that has 117-degree wide field of view and a 2x telephoto lens for optical zoom. All three cameras are placed inside the ciruclar module along with the LED flash. Notably, there is no separate lens for portrait shots and they are clicked using a combination of these cameras. 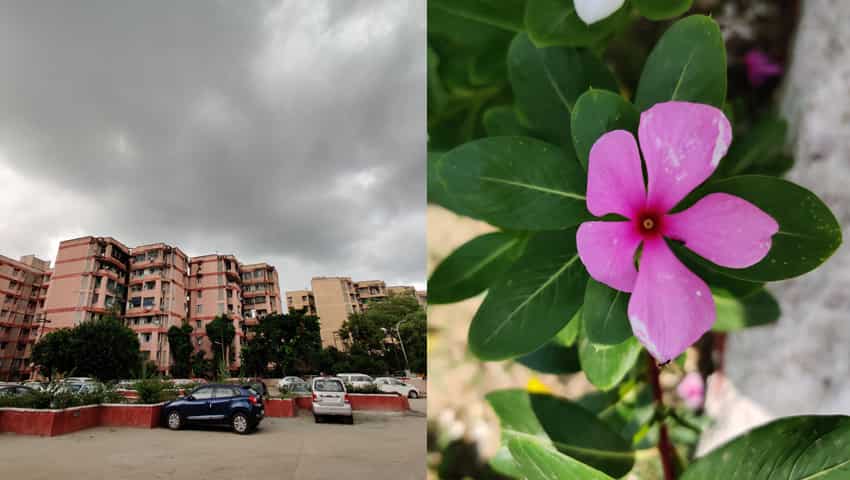 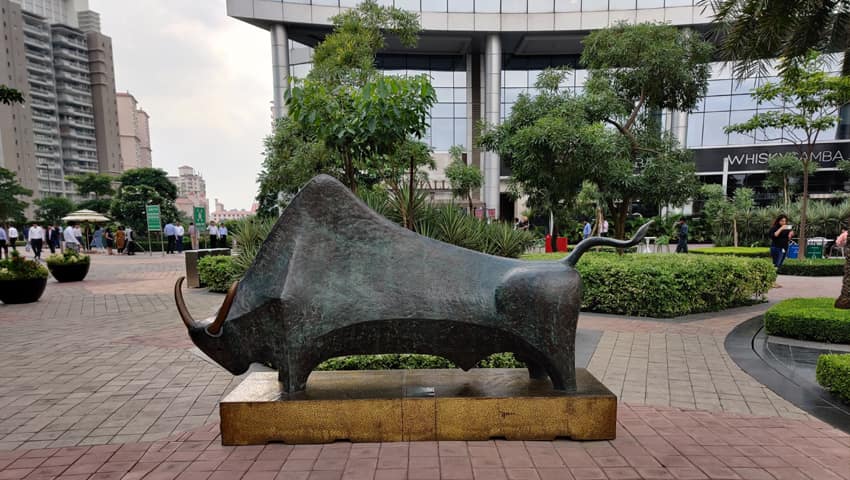 The primary camera used on this smartphone is excellent and takes stunning images in ideal light conditions. It captures details with great efficiency and colours are balanced as well. I managed to capture some good shots from the wide angle lens too but the quality in certain cases could have been better. 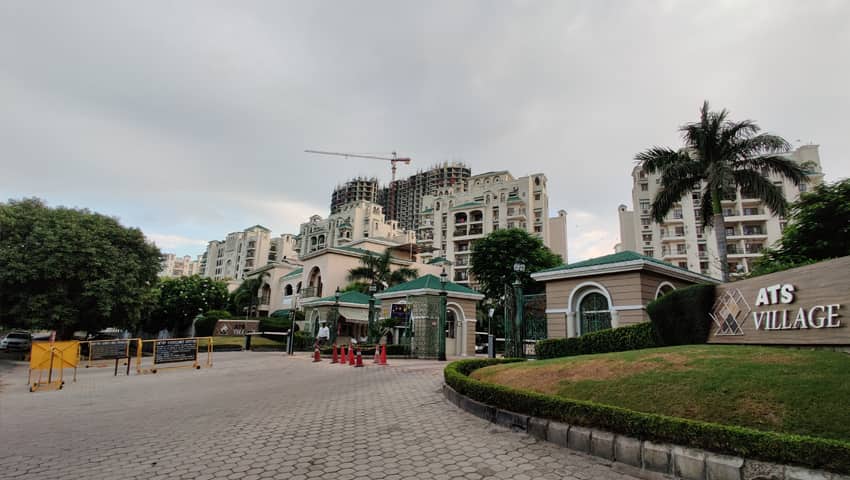 There is also a Super Macro Mode on the phone which has been included so that you can capture subjects from close distance. However, it fails to guide you about the positioning of the phone and object. If you have a good photography sense, you can still manage to take some decent shots using this lens. On the front, the OnePlus 7T comes with a 16-megapixel sensor which impresses in most conditions.

The OnePlus 7T camera outperforms most of its competitors in low light conditions. The images clicked at night, even with the Night Mode turned off, were very clear. There was some noise in the pictures but the output is still better than most cameras I have used lately. 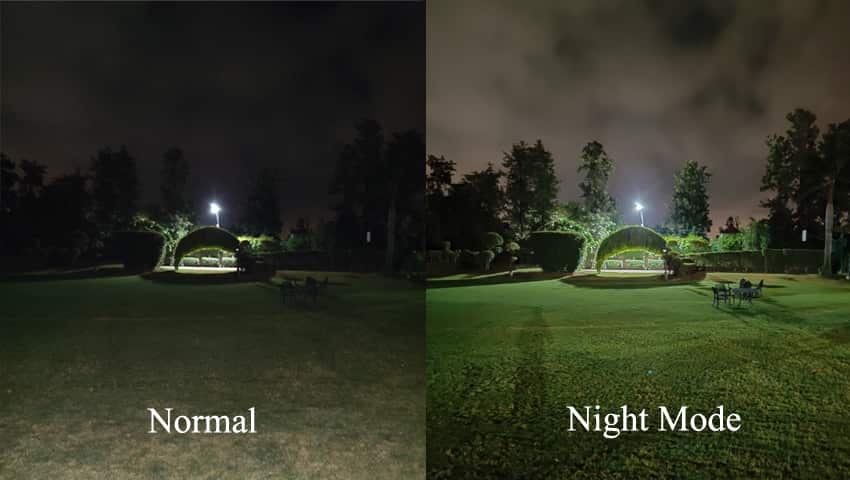 Also, if you use your smartphone to shoot videos, OnePlus 7T is probably the best option out there.

OnePlus has used a 3800 mAh battery on the OnePlus 7T which comes with the new Warp Charge 30T that is claimed to be quicker than Warp Charge 30. Inside the box, you get a 5V/6A (30W) charger which claims to charge the phone from zero to 70 percent in just 30 minutes. The battery lasts for an entire day, on medium usage. But, if you like playing games or use smartphone as your go to option for media cosumption, the OnePlus 7T requires to be juiced up during the day.

Also, the battery is drained quicker if you have kept the display at 90 Hz refresh rate. Then again, what is the point of having it if you are forced to use lesser settings to save battery. The fast charging comes as a blessing though and you get almost 70 per cent charge in 30 minutes, as claimed by OnePlus.

As I mentioned at the beginning, the OnePlus 7T is placed right between the OnePlus 7 and OnePlus 7 Pro - both in terms of pricing and features. It gives a reason to both set of buyers to be angry at the company as some of them got too less for what they paid while others paid too much for what they got. While the two might sound similar, they are not. This is the first time when OnePlus is not just facing competition from other premium smartphones but also Asus ROG Phone II - dubbed as the gaming beast.

At the same time, OnePlus 7 price in India has been reduced by Rs 3,000 soon after 7T was launched in the country, making it an attractive option. However, the dual rear camera setup is a reason why you wouldn't want to opt for it. Coming back, the OnePlus 7T offers a powerful processor, good camera combination, super fast charging and a smooth display for less than Rs 40,000.

All of these make the OnePlus 7T a good buy. However, I would advise you to switch only if there is a need because the way technology is evolving the OnePlus 7T Pro or OnePlus 8 might make you regret the decision.