OnePlus 5 will be launched in India today at 2pm at an event at NSCI Dome in Mumbai. It will also be live streaming the event. 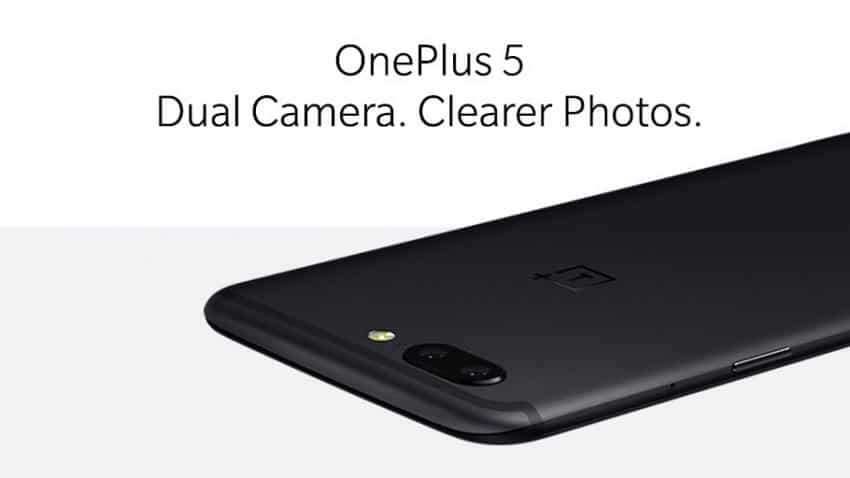 Just two days after the global launch OnePlus will on Thursday launch their latest flagship smartphone the OnePlus 5 in India. The smartphone will be launched at 2pm at an event held in Mumbai and will be live streamed (you can watch the OnePlus 5 live streaming here).

The OnePlus 5 is one of the top smartphones people were looking out to buy this year. With its specifications the smartphone competes with some of the top end smartphones launched including the Samsung Galaxy S8, Apple iPhone 7 Plus, recently launched HTC U11 and Oppo F3 Plus. Let us see how it performs in comparison to these smartphones.

ALSO READ: OnePlus 5 launch on June 22 in India confirmed; here's what to expect

Camera: The biggest highlight about the OnePlus 5 is the camera, so what are its camera specifications? It has a dual rear camera setup that has a 16 megapixel main camera which is a Sony IMX398 sensor with 1.12-micron pixels and an f/1.7 aperture and a 20 megapixel telephoto camera with Sony IMX350 sensor, 1-micron pixels and f/2.6 aperture.

As for the front camera the OnePlus 5 has a 16 megapixel camera with a 1-micron pixel Sony IMX371 with an f/2/0 aperture and EIS.

OnePlus seems to have taken inspiration from Apple’s iPhone 7 Plus, not only in terms of design and placement but also the functioning. However according to reviews thought the camera has good specifications it still doesn't quite match up to it.

ALSO READ: Is OnePlus 5's dual camera as good as the iPhone 7 Plus?

The Apple iPhone 7 Plus has dual 12 megapixel rear cameras that are highly advanced in new phones with six elements, optical image stabiliser, high-speed sensor, Quad-LED true tone flash, Apple-designed ISP, 60% faster and 30% more energy efficient and wide colour gamut. One of the rear camera has wide-angle f/1.8 aperture and the other camera has a telephoto f/2.8 aperture.

Beside this, it has a 2x optical zoom and a digital zoom up to 10x. The iPhone 7 Plus is especially known for the quality of its cameras.

The F3 Plus by Oppo is its first smartphone to feature dual cameras. It will have a 16 megapixel front camera and a 8 megapixel rear camera. One of the sensors also has a 120 degree wide angle lens to allow people to take group selfies.

RAM: OnePlus 5 comes in two RAM variants one with 6GB RAM and the other with 8GB RAM. Even the OnePlus 3T launched earlier this year similarly has a 6GB RAM.

Samsung Galaxy S8 comes with a lower 4GB RAM. While the iPhone 7 Plus comes with only a 3GB RAM.

The HTC U11 has two RAM variants one with 4GB RAM and the other with 6GB RAM. However, in India only the higher 6GB RAM variant is available. The Oppo F3 Plus has a 4GB RAM.

This is similar to the OnePlus 3T which has both 64GB and 128GB internal memory variants.

Display: Coming to the display the OnePlus 5 has sports a 5.5 inch display the same as the OnePlus 3T. It is full-HD Optic AMOLED display supporting sRGB and DCI-P3 colour standards and is protected by 2.5D Gorilla Glass 5.

The Samsung Galaxy S8 comes with a much larger 5.8 inch display and the Galaxy S8 Plus with a huge 6.2 inch infinity display. This is the highlight of the smartphone.

This is much larger that even the iPhone 7 Plus which has a display of 5.5 inches.

The Oppo F3 Plus, on the other hand, has a larger 6 inch full HD resolution display.

Processor: The OnePlus 5 is powered by a Qualcomm Snapdragon 835 SoC 1.9GHz octa-core processor.

The Samsung Galaxy S8 too has the latest Qualcomm Snapdragon 835 SoC processor in the US, but in India it will come with the Samsung Exynos 8895 SoC processor, which is similar.

Apple iPhone 7 Plus comes with the A10 Fusion chip with 64-bit architecture embedded M10 motion coprocessor.

Battery: Propagated to be the ‘slimmest flagship phone ever’ the OnePlus 5 has a 3600mAh battery unit. This just a little higher in comparison to the OnePlus 3T which has a 3400mAh battery. Both support quick charging capabilities.

The Samsung Galaxy S8, on the other hand, comes with a lower 3000mAh battery which also comes with Quick Charge 3.0 capability.

The Apple iPhone 7 Plus has a lower 2900mAh battery. The HTC U11 comes with a 3000mAh battery that offers 24.5 hours of talk time and 14 days of standby time. It also supports Quick Charge 3.0 support. While the Oppo F3 Plus has much higher 4000mAh battery.