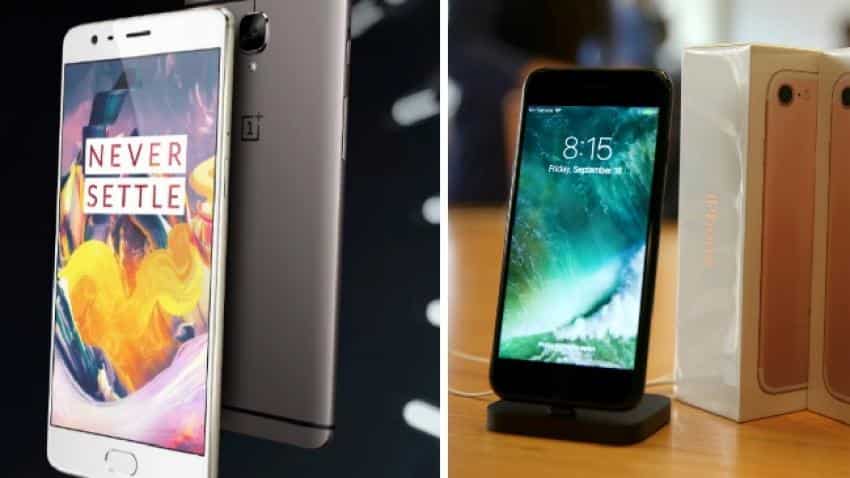 From dual nano-SIMs to storage space constraints for nearly the same price, people have been debating over iPhones and Android smartphones for a while.

Zeebiz looked at the successor of flagship model OnePlus 3 – OnePlus 3T which has been priced in the same range as the iPhone 6 and spelled out its comparison.

In a surprising move, Apple has been selling its new iPhone 6 32GB variant on Amazon India for Rs 29,999 as well as in China and Taiwan, instead of its website and retail stores.

The formal launch of the phone was supposed to be on March 10 in Taiwan.

In matters of operating system, the OnePlus 3T runs on Android 6.0.1 with a 1.6GHz quad-core and has 6GB RAM space while the iPhone 6 has iOS 10 with 1.84GHz A8 chip 64-bit architecture processor and 1GB RAM.

Apple’s iPhone 6 has 1810mAH lithium-ion battery providing talk-time of 14 hours on 3G networks and standby time of 240 hours. OnePlus 3T claimed that its phone can have 'a day's power' in half an hour of charging.

"The new 3400 mAh battery features a 13% increase in capacity over the OnePlus 3," the company said in its advertisement. Both phones have batteries that are not removable.

OnePlus 3T 16-megapixel front and back camera while the iPhone 6 has 8MP primary camera with auto focus and 1.2MP front facing camera.

Lastly, OnePlus 3T offered its customers dual nano-SIM however iPhone 6, which has many of its features resembling previous iPhone models, has only a single nano-SIM slot.