Previous "skin to screen" approaches have employed flexible overlays, interactive  textiles and projector/camera combinations that can be cumbersome. 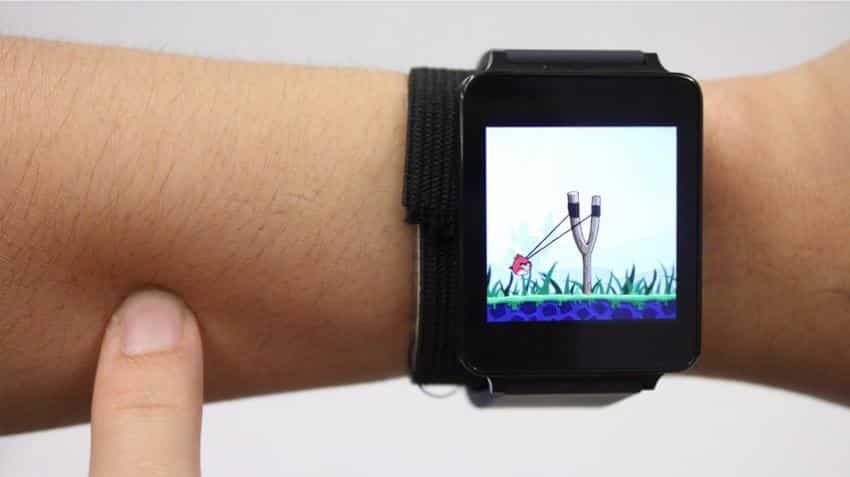 Fitbit plans launch of new products by end of 2016

Soon, you'll be able to play Temple Run by swiping your finger across your arm as a team of researchers from Carnegie Mellon University has developed a new wearable technology that can turn the entire lower arm into a touchpad.

Called SkinTrack and developed by the Human-Computer Interaction Institute's Future Interfaces Group, the new system allows for continuous touch tracking on the hands and arms.

It also can detect touches at discrete locations on the skin, enabling functionality similar to buttons or slider controls.

Previous "skin to screen" approaches have employed flexible overlays, interactive textiles and projector/camera combinations that can be cumbersome.

SkinTrack, by contrast, requires only that the user wear a special ring, which propagates a low-energy, high-frequency signal through the skin when the finger touches or nears the skin surface.

"The great thing about SkinTrack is that it`s not obtrusive; watches and rings are items that people already wear every day," said researcher Yang Zhang."

A major problem with smartwatches and other digital jewelry is that their screens are so tiny," said Gierad Laput."SkinTrack makes it possible to move interactions from the screen onto the arm, providing much larger interface," said researcher Chris Harrison.

The user wears a ring that produces a high-frequency electrical signal. When the finger gets near to the skin or touches the skin, that signal propagates through the skin.

The technology is safe. No evidence suggests that the radio frequency signals used by SkinTrack have any health effects.

The body is commonly excited by daily appliances - everything from the tiny amounts of current drawn from the finger by touchscreens to the electromagnetic noise emanating from fluorescent lights - with no ill effects.

The study will be presented at ACM Conference on Human Factors in Computing.

Fitbit plans launch of new products by end of 2016