In good news for Apple fans, the Cupertino-based tech giant is reportedly working on a new-generation MacBook Air which is expected to be launched later this year. 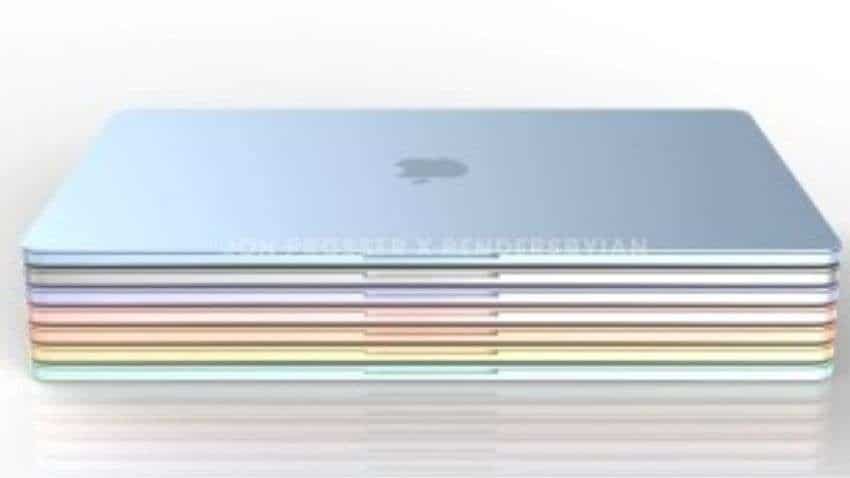 Apple MacBook Air: In good news for Apple fans, the Cupertino-based tech giant is reportedly working on a new-generation MacBook Air which is expected to be launched later this year. Also, new renders shared by Prosser, a YouTuber along with a leakster Ian Zelbo on the latest episode of FrontPage Tech revealed that the iPhone maker will launch its upcoming MacBook/MacBook Air lineup with an all-new flat desktop design accompanied by white bezels.

The device which is expected to either be the next MacBook Air or a successor to the regular MacBook is depicted in a total of seven colors just like the recently launched iMac and features squared offsides, the gsmarena reported. The signature MacBook Air tapered edge is gone.

The sides reveal USB-C ports while the bottom features two large rubber feet which should help keep the laptop slightly raised for better thermal management. Speaking of performance this laptop is set to debut with Apple's next-gen M2 chipset.

Moving to the screen we can see thin bezels colored in white and a webcam centered at the top. The keyboard also matches in white and packs the usual layout with a Touch ID sensor embedded in one of the keys. The trackpad looks to match those found on current MacBook laptops in terms of size, the report said.

To recall, Apple recently launched all-new iMac which sports a more compact design lifted straight from the iPad and iPhone 12 series and comes powered by the new M1 chip. The latest iMac now brings a design that is just 11.5mm thin.

The new iMac features an expansive 24-inch 4.5K Retina display with narrower borders and 11.3 million pixels. It comes with a P3 wide colour gamut and over a billion colours, plus 500 nits of brightness.

The Cupertino-based tech giant announced the transition to Apple Silicon would take two years during its 2020 WWDC. The products released so far have been aimed at consumers, so the company is likely to focus on pro Macs for its next releases.