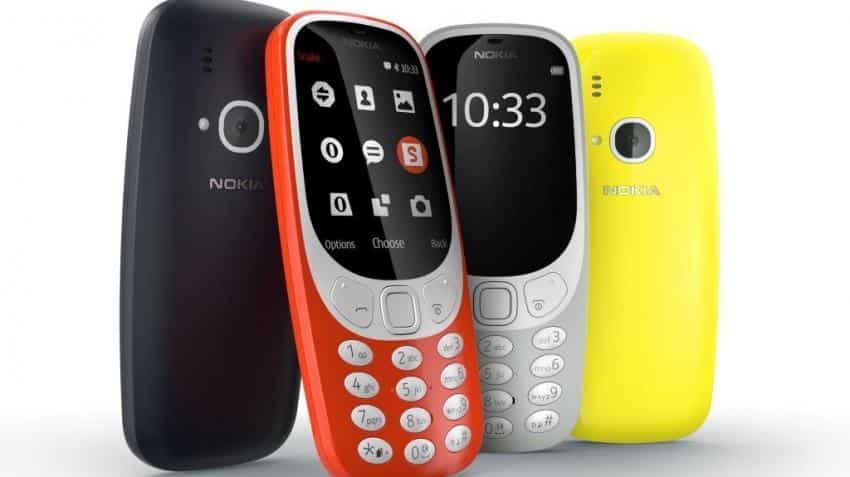 Born in the year 2000, it had a dark blue body, emitted a deep green light from its tiny screen, and housed a charming game called "Snake". And an entire generation grew up loving the iconic Nokia 3310.

Then came the Nokia 1100 in 2003 -- a sturdy affair with an inbuilt torch -- which quickly became the best-selling consumer electronics device of its time.

It was the Golden Age of Nokia -- with hardly a competitor in sight.

Inevitably, though, the age passed, and Nokia devices, with their "indestructible" bodies and long-lasting batteries, disappeared after ruling the Indian market for several years.

But they left behind two key legacies: a brand with great recall value, and a wide and surviving sales network.

With market buzz suggesting that the 3310 is set to make a comeback -- perhaps as early as May -- the brand recall and sales network can only help.

The relaunch will be accompanied by some Android-based phones like the Nokia 6 -- to be launched in China on February 26 -- and the Nokia 8, to be showcased at the upcoming Mobile World Congress in Barcelona, which begins on February 27.

Are the ever-evolving, 4G-conscious Indian smartphone consumers likely to embrace an upgraded 3310, which is expected to cost a little over Rs 4,000?

"We have to understand that, in India, we still have people who don`t have a mobile phone. And if Nokia, with its adequate distribution network, is able to tap that near-edge market, the 3310 has the potential to do wonders and become a leading handset," Faisal Kawoosa, Principal Analyst, Telecoms, CyberMedia Research (CMR), told IANS.

"There is still enough of India that can consume it. After all, in India, three of the top 20 handsets that are deployed are still from Nokia," Kawoosa added.

Mobile handset shipments touched 265 million in 2016 with feature phones making up about 59 per cent of the overall market. It is a strong reaffirmation of the fact that it would take quite a bit longer for India to become a smartphone-only market.

"Two-thirds of the Indian market is still feature phones, and among feature phones, 3310 was the king. It is going to be a niche product but we have no reason to believe it cannot be successful," Jaideep Mehta, Managing Director, IDC South Asia, told IANS.

According to Tarun Pathak, Senior Analyst, Mobile Devices and Ecosystems at New Delhi-based Counterpoint Research, one of the biggest challenges for the new Nokia would be to live up to its legacy.

"Users will not look at Nokia as a start-up, but rather as a billion dollar company of the past. To convert this challenge into an opportunity, Nokia needs an impressive start. I think the new Nokia should differentiate its products from the experience perspective rather than mere specifications and target the mid-end smartphone segment," Pathak told IANS.

After acquiring Nokia for $7.2 billion in 2013, Microsoft soon realised it had made a huge mistake and sold off the company`s phone-making business to Apple`s supply-chain partner Foxconn.

HMD has reached agreements with both Microsoft and Nokia for the use of the Nokia brand and some design rights. HMD is planning to spend some 400 million euros to market the Nokia brand for the next three years.

When it comes to smartphones, people would expect the same reliability from Nokia as they did with their feature phones.

"People who started their mobile phone journey with a Nokia are over 30 years of age. So, the biggest challenge for Nokia to succeed in smartphones would be to connect with teenagers and youth who drive smartphone sales, either by being the primary users or by influencing their elders to take a decision," Kawoosa explained.

For Nokia to make some inroads in the smartphone segment, it needs to leverage the wide base of users who have actually experienced using a Nokia -- and somehow ensure today`s buyers are influenced by them.

"Say, something like `offers for parents to gift a Nokia smartphone to their children` to pass on the trust to the next generation," Kawoosa suggested.

Nokia has to keep it simple. It`s known for its hardware and that is where it should be playing, the experts said.

"Launching products like the 3310 is more likely a strategy to bring alive the emotions and connect that users had with Nokia as a brand in the past. It is a good strategy to start with. And India will be a critical market as close to 145 million feature phones will be sold in the country in 2017," Pathak said.

"People still remember the reliability and sturdiness of the devices. There is no doubt that it will help Nokia gain some foothold in the market as a new entrant," Mehta said.