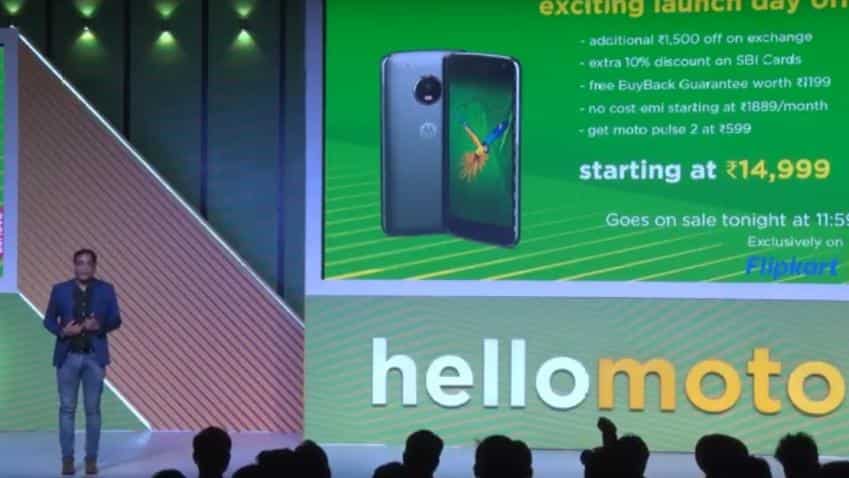 Motorola executives at the launch of the new Moto G5 Plus. Photo: YouTube screengrab
Written By: ZeeBiz WebTeam
RELATED NEWS

Motorola on Wednesday launched its much awaited Moto G5 Plus for Rs 14,999. The company announced that the smartphone will be available for sale through its exclusive partnership with Flipkart from midnight today.

The Moto G5 Plus comes with the Snapdragon 625 processor, 3000mAh battery, 5.2 inch display, 13 megapixel rear camera and 5 megapixel front camera. The smartphone will come with a metal body design. Both offer extendable memory options via microSD card up to 128GB.

The Moto G5 Plus runs on Android 7.0 Nougat operating system. The Moto G5 and G5 Plus will also get Google Assistant, a feature which is exclusively available on Google Pixel and Pixel XL.

Motorola also revealed that it is offering a BuyBack Guarantee offer with the new Moto G5 Plus on its exclusive online retail partner Flipkart. This announcement was made ahead of its launch on Wednesday in India.

Flipkart has given the Moto G5 Plus offer on its site through its notes.

So what is this BuyBack Guarantee? This means that if a customer chooses to exchange the Moto G5 Plus for another smartphone 6 to 8 months later after they purchased it, they will get a fixed exchange discount.

Flipkart notes that if customers try to buy a smartphone in exchange of the Moto G5 Plus more than 8 months after the purchase they will get a discount based on the prevailing smartphone rates. However, to qualify for the BuyBack Guarantee offer the new smartphone will have to price more than the Moto G5 Plus. It will also have to be in good condition with screen intact at the time of exchange and with the original box, charger and accessories, which have to be in working condition.

The offer makes it easier for customers to upgrade to the new smartphones much easier. Users can also opt for a doorstep pick up.

The company had unveiled the Moto G5 and Moto G5 Plus on Sunday at the Mobile World Congress (MWC) 2017 in Barcelona. It has been one of the most anticipate smartphone launches for the year.