Mi Mix 2S price in India to be approximately Rs 34,200; check key specs and more of this Xiaomi smartphone 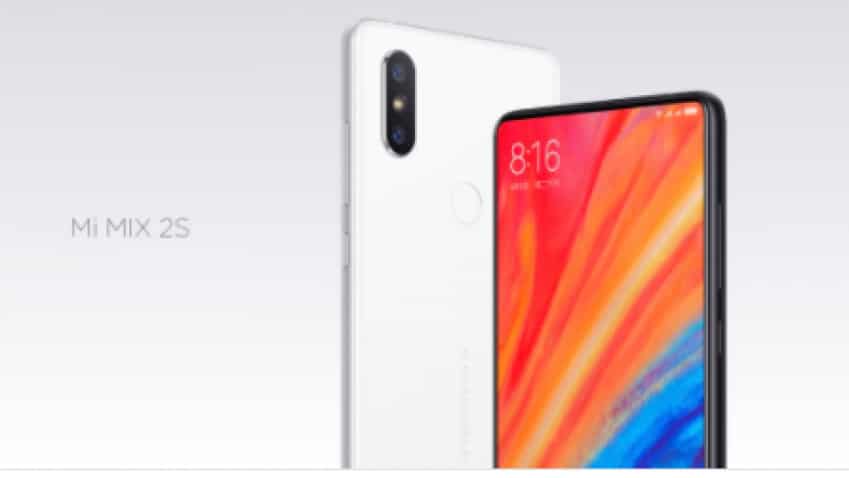 Mi Mix 2S price in India: Chinese technology firm Xiaomi has unveiled its new smartphone Mi Mix 2S in Shanghai today. Mi Mix 2S has been launched in three variants, 6GB RAM and 64GB version is reportedly priced at 3299 RMB (Rs 34,200 approx), 6GB RAM/128GB ROM version will cost 3599 RMB (Rs 38,000 approx), while 8GB RAM version with a 256 storage option will come at a price of 3999 RMB (Rs 41,00 approx) in China. As numerous leaks had suggested, the new device comes with a thin-bezel display, with a vertically stacked dual camera setup. The Mi Mix 2S's front facing camera is placed at the bottom on the right corner, on contrary to speculation that it would be positioned within a notch, like its predecessor, according to a digit.in report. The rear panel of Mi Mix 2S is made of ceramic, facilitating wireless charging. The new smartphone will be available in colour variants of White and Black.

According to the digit report, Mi Mix 2S is powered by a 2.8GHz Qualcomm Snapdragon 845 platform with an Adreno 630 GPU, has a dual-rear camera setup with a 12MP wide angle and a 12MP telephoto lens, and also features a 1.4 micron pixel Sony IMX363 sensor along with dual pixel autofocus (dual PADF). Xiaomi reportedly implemented hardware level noise reduction device for better shots on the Mi Mix 2S, which also boasts of having a photo score of 101 on DxOMark, higher than the Google Pixel 2 and the second highest after Samsung Galaxy S9.

The Mi Mix 2S is set to have thinner bezels than its predecessor, using series 7000 Aluminium. The device, supporting Qi wireless charging with 7.5W quick support, can fully charge the phone under three hours, the company said. Xiaomi reportedly exhibited some ‘powerful’ AI features, which the new phone will boast of. Users can add an artificial background to an image and save it as a GIF or an image, using “Dynamic” Bokeh shots. Mi Mix 2S also boasts of AI scene detection, along with instant language, currency translation using the camera, a smart assistant called ‘XiaoAI’, capture photos, and control other Mi devices, the report added.