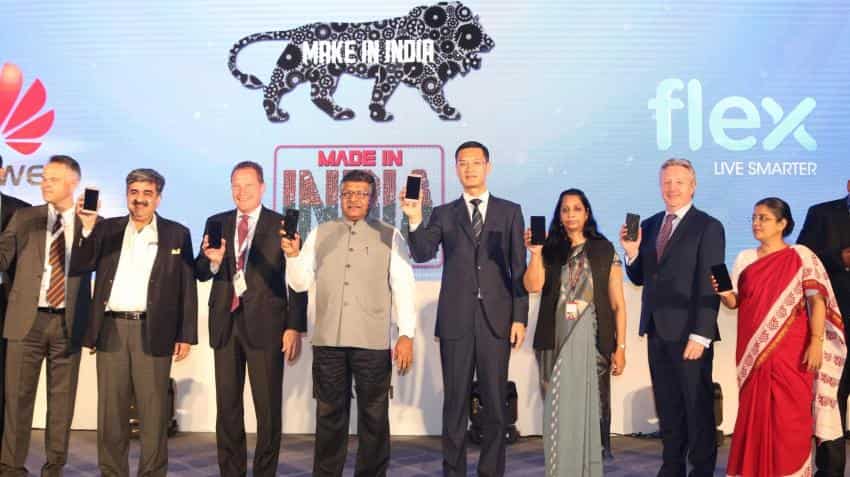 Technology Minister Ravi Shankar Prasad with Huawei India CEO Jay Chen and others during a programme organised to announce Huawei-Flex collaboration to manufacture smartphones in India, in New Delhi on Sept 23, 2016. Photo: IANS

More than 83 million smartphones sold in India in 2016 were 'Made in India'.

In Q4 2016, 3 out of 4 smartphones sold in the country were manufactured domestically, a Counterpoint Research report said.

This comes as good news for the government which has been pushing for the manufacturing of smartphones in India. Apple too has been looking to set up its manufacturing facility in India.

More than 7 out of 10 smartphones shipped in India were LTE capable. While smartphone shipments continued to slowdown from the second half of 2016 due to the strength of ultra-low cost brands, feature phone shipments grew by 4% year on year (YoY).

In comparison to global smartphone shipments which grew by 3%, in India shipments grew a healthy 18% annually in CY 2016.

However, demonetisation has widened the usual seasonal decline of mobile phones from estimated 12% to 19%.

“While the demonetisation had its impact on the local players, it will be unfair to take credit from Chinese players that continue to expand their presence throughout India, riding on aggressive portfolio strategies and substantial marketing spends,” said Counterpoint Research.

Samsung retained the top spot with 24% market share, it was followed by China-based smartphone manufacturers such as Vivo, Xiaomi, Lenovo and Oppo.