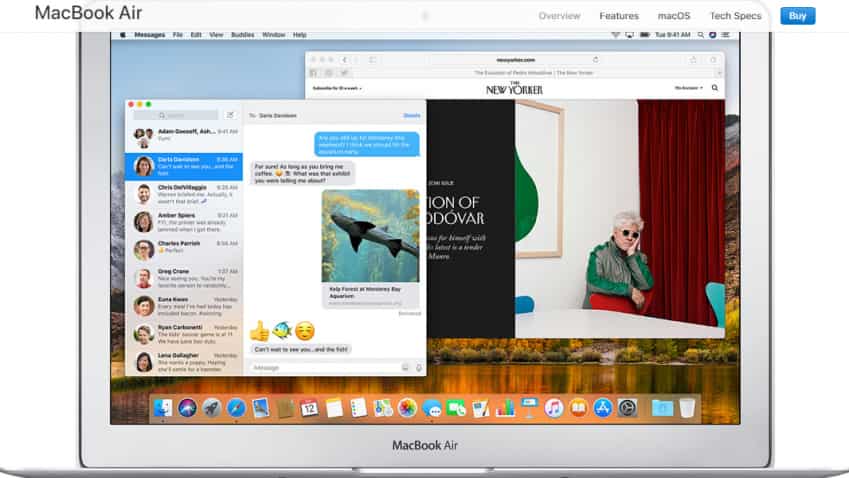 Since Apple is reportedly looking to revive the moribund MacBook Air with refreshed hardware, the new laptop is expected to remain the cheapest macOS laptop in the portfolio while boosting sales. Image source; company website

Speculation about Apple’s new MacBook and MacBook Air for 2018 indicates that new MacBooks are likely to have touchscreen keyboards. The keyless keyboard appeared in patent form at the US Patent & Trademark Office. According to the documents, this is all about getting that touchscreen to feel like a real keyboard, said a report on t3.com. The report said that Apple is looking at placing a unique haptic feedback board underneath the second display which should make it feel like real keys, sort of, when in keyboard mode. Apple reportedly also intends to use this area to make a giant single screen, for second screen multitasking and, of course, for designers to use with an Apple Pencil for editing.

It may be noted that Apple has announced the dates for this year’s Worldwide Developers Conference that starts on June 4, 2018. "Apple has regularly used WWDC to launch ‘secondary’ products, and a refresh of the MacBook Air not only fits that historical pattern but also promotes the new macOS hardware both to an audience which has a love for macOS, but also ensures that the MacBook Air picks up visibility ahead of the ‘back to school’ market where the ultraportable has fared well in previous years," said forbes.com report.

Citing the discussion around retina display in this new MacBook Air, the Forbes report said, "Not only does it give existing Air users a reason to upgrade their older hardware to get the new screen, it also gives Apple a reason to keep the price as high as possible."

Since Apple is reportedly looking to revive the moribund MacBook Air with refreshed hardware, the new laptop is expected to remain the cheapest macOS laptop in the portfolio while boosting sales.

As 2017 saw Apple beats ASUS in the laptop sales charts, reviving the MacBook Air could be expected to see an increase of ten to fifteen percent as Cupertino captures more market share at the lower end of the market.