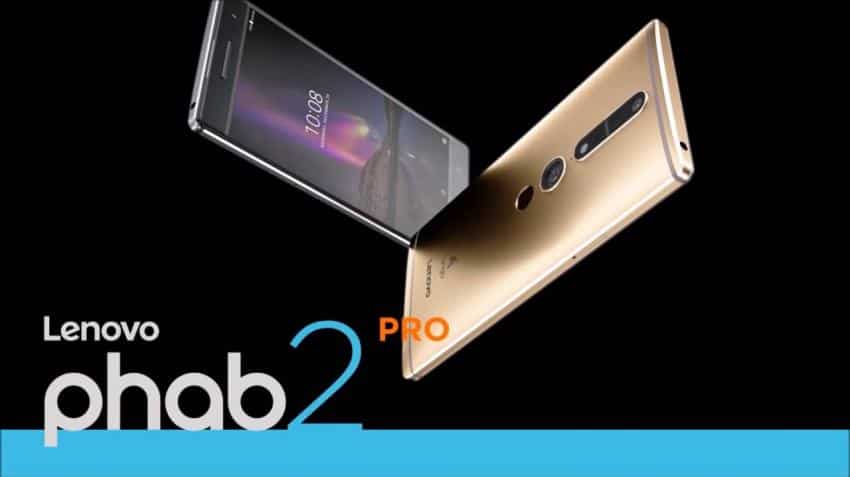 Phab 2 Plus has an all-metal body with a Gorilla Glass display and curvy back. Photo: YouTube
Written By: IANS

In the crowded smartphone market for 5 and 5.5-inch displays, there is a dedicated space for those who love to have phablets in their digital lives. Chinese smartphone maker Lenovo recently expanded its Phab series with Phab 2 Plus which is stricly for those looking for heavy media consumption.

The Rs 14,999 device is in direct contest with Xiaomi`s Mi Max that has the same specifications and price and was launched in May 2016.

Is Lenovo better than Mi Max? Let`s find out.

Phab 2 Plus has an all-metal body with a Gorilla Glass display and curvy back. The 6.44-inch display is quite immersive at maximum brightness. Even though the device offers a one-handed mode, you actually need to use both hands to work seamlessly on it.

The fingerprint scanner at the back panel is very responsive. There is a hybrid SIM tray on the left and volume and power buttons at right.

The striking feature that differentiates Phab 2 Plus from Mi Max is its rear dual-camera setup with LED flash.

Phab 2 Plus, however, comes with the not-so-popular octa-core MediaTek processor (MT8783), 3GB of RAM and 32GB of storage. The device runs on the near-stock Android Marshmallow.

In Settings, you can find features like "Smart Assist" for one-handed mode, change volume when picking up the phone and auto-answer a call.

The Dolby Atmos audio is one of the striking features. The app lets you choose from multiple sound profiles. Phab 2 Plus ships with JBL earphones that deliver decent audio quality (we suggest that users consume content that has Dolby support).

Lenovo Phab 2 Plus features two 13-megapixel camera sensors. Lenovo claimed that the secondary camera provides depth in a photo and it was right. The continuous autofocus works well even with video.

The AR camera seems to be inspired by augmented-reality game "Pokemon Go".

In the loop test, the device returned four hours 39 minutes when we played two full-HD movies.

Phab 2 Plus heats up easily, has a smaller battery as compared to its only competition in the Indian market and the dual-camera setup is not very impressive.

Conclusion: The positives will surely make the choice difficult between Phab 2 Plus and Mi Max. If you are an audiophile, go for Phab 2 Plus. The near-stock Android is a treat.