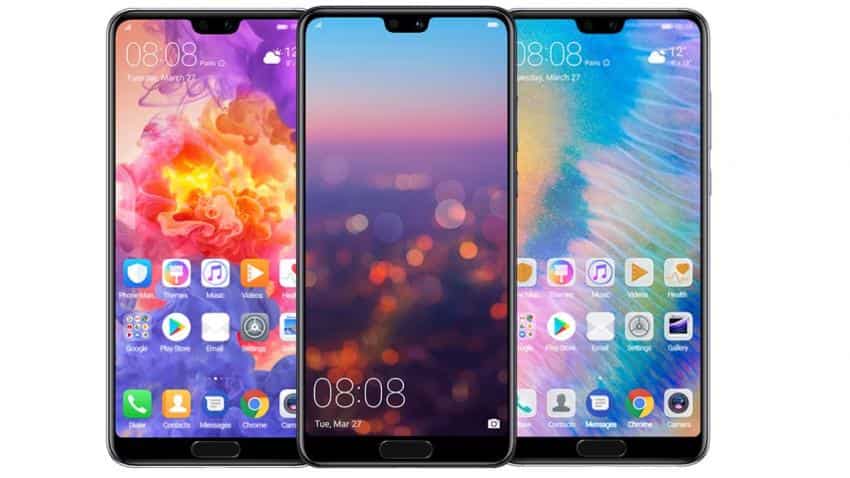 Amazon has started teasing the smartphone and also has a dedicated page for Huawei P20 series on its website. Image source: Official website
Written By: ZeeBiz WebTeam

Huawai P20 Pro, P20 Lite smartphones are set to be launched in India on April 24th as Amazon exclusives. Amazon has started teasing the smartphone and also has a dedicated page for Huawei P20 series on its website. The Huawei P20 Pro is priced at EUR 899 in Europe. Likewise, it is expected that the price of the smartphone in India would be roughly around Rs 73,200. The P20 Lite, is available in Europe for around EUR 350 and that converts roughly to Rs 29,250 in India.

Display
Huawei P20 Pro comes with a 6.1-inch FullView OLED display with 1080 x 2240 Full HD+ resolution. It also has a density of 408 pixels per inch. Huawei has embed the fingerprint sensor on the front of the handset instead of at the back.

Processor
The smartphone runs on Huawei Kirin 970 octa-core SoC clocked at up to 2.36 GHz with an ARM Mali-G72 MP12 GPU. It also features a dedicated Neural Processing Unit (NPU) to drive the AI features of the handset, as per mysmartprice.com.

Software
Huawei P20 Pro comes with Android 8.1 Oreo-based EMIUI 8.1 out of the box.

Memory
Huawei P20 Pro comes with 6GB of RAM and 128GB of onboard storage.

Camera
The P20 Pro has the world’s first triple-lens Leica camera that delivers highly impressive image quality in all lighting conditions. The front camera is a 24MP Sony IMX576 sensor paired with an f/2.0 aperture lens.

Display
This smartphone comes with a 5.84-inch 1080 x 2280 Full HD+ resolution IPS LCD FullView display with a notch on the top. The fingerprint sensor in this smartphone is placed at the back.

Memory
The phone comes with 4GB of RAM and 64GB of onboard storage and a Hybrid Dual SIM slot. The storage can be expanded by up to 256GB.

Software
The Huawei P20 Lite comes with Android 8.0 Oreo-based EMUI 8.0 out of the box.

Camera
P20 Lite has a 16MP + 2MP dual-camera setup with an LED flash at the back. The smartphone gets a16MP snapper on the front for selfies.