HTC U Ultra proves to be a tough competitor for Apple iPhone 7, Google Pixel

Can HTC U Ultra take on Google Pixel and Apple iPhone 7 in terms of its specifications? We take a deeper look at which smartphone you should go for. 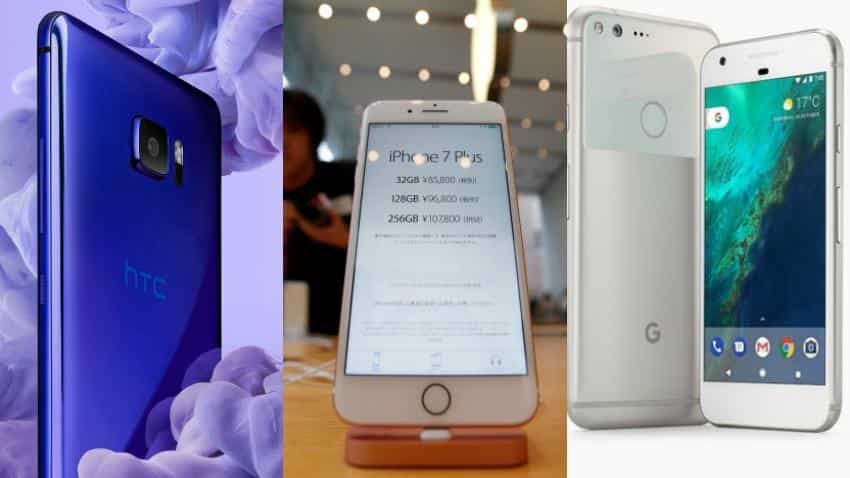 HTC on Tuesday finally launched the HTC U Ultra and HTC U Play smartphones in India. The company had earlier last month unveiled both the smartphones. While both smartphones were launched together, all eyes were on the premium priced HTC U Ultra.

If you recall HTC back had been named as recognised as the third most successful premium smartphone brand in the last decade after Samsung and Apple, according to CMR Mobile Industry Consumer survey published two days back.

This leaves us to judge which is the better premium smartphone in terms of its specifications.

The HTC U Ultra specifications include a 5.7 inch Quad HD Super LCD display and runs on Android 7.0 Nougat with Sense UI customisations. Apart from this, it has a quad-core Qualcomm Snapdragon 821 SoC 2.15GHz processor, 4GB RAM, 64GB and 128GB internal storage variants which can be expanded up to 2TB via microSD card. The 64GB variant is protected by Gorilla Glass 5 and the 128GB variant is protected by Sapphire glass. It also has a 16 megapixel front camera and 12 ultrapixel rear camera. It's battery capacity is 3000mAh.

In comparison the iPhone 7 features a smaller 4.7 inch Retina HD display. Only the iPhone 7 Plus has a larger 5.5 inch display. It has a higher quad-core 2.34GHz processor, lower 2GB RAM and comes with three internal memory variants, ie 32GB, 128GB and 256GB. However, it does not have extendable memory like the HTC U Ultra. In terms of battery life it is much lower in comparison to HTC U Ultra with 1,960 mAh. The iPhone 7 comes with a 12 megapixel rear camera and a 7 megapixel front camera. It also comes with Ion-strengthened glass and oleophobic coating.

Google Pixel features include a 2.5D Corning Gorilla Glass 4 protected super AMOLED display and comes in two sizes – 5.0 and 5.5 inch. This is still a little smaller than the HTC U Ultra's display. It is also fitted with Qualcomm’s latest Snapdragon 821 Quad core (2x 2.15 Ghz and 2x1.6 Ghz) processors and 4GB RAM. Similar to the U Ultra smartphone.

Pixel has a 2770 battery while the 5.5-inch device has 3450 mAh battery, which is a little lower in comparison to the HTC U Ultra. Both the devices i.e. the iPhone 7 and Pixel support "Quick Charge" technology, promising seven hours of battery life with just 15 minutes of charging.

Google Pixel comes with 32GB internal memory and like the iPhone 7 cannot be expanded. Which can be a drawback if you have need for the storage of huge amount of data on your smartphone. As far as the cameras are concerned, it has 12.3 megapixel rear camera and 8 megapixel front camera. This too loses out to the HTC U Ultra.

In terms of the features the HTC U Ultra definitely seems to be much ahead of the Apple iPhone 7 and Google Pixel. However, it can be argued that the smartphone came nearly 4-5 months later after the launch of the iPhone and the Pixel, and hence the advantage in terms of specifications. However, the this is not much of a gap.

While the competition will be tough among these smartphones, the HTC U Ultra may have lost a little ground as it launched the smartphone a bit later than the two other smartphones and many may have already gone in for those smartphones.

Apart, from this while price and specifications of the HTC smartphone may be better than the other two, in terms of brand names Apple still ranks ahead. The other part that may prove to be problem for the smartphone is Samsung which is about to unveil and consequently launch the Galaxy 8 smartphone soon.

HTC launches HTC U Ultra smartphone priced at Rs 59,990; here's what to expect