How the OnePlus 5T stacks up against Apple’s iPhone X

OnePlus launched its OnePlus 5T on Thursday. Here is how the features of the smartphone compare to Apple's iPhone X. 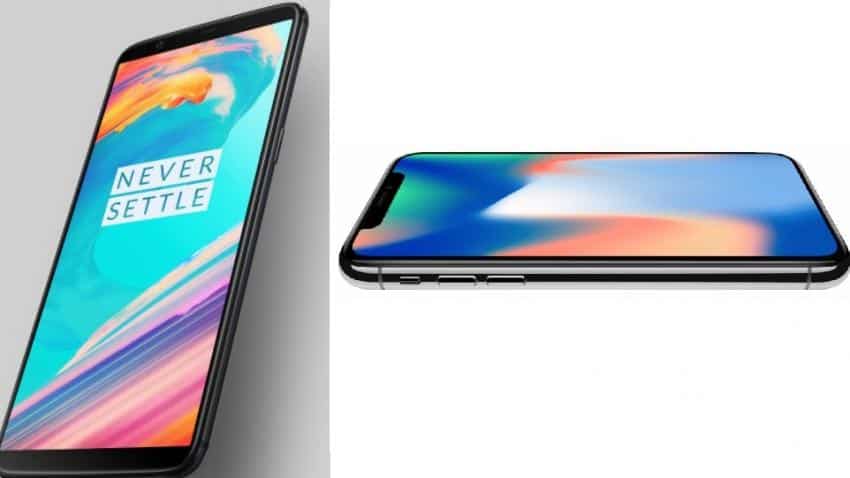 The OnePlus 5T will be available in India from November 21 for half the price of the iPhone X. Photo of OnePlus 5T (left) and iPhone X (right). Image Source: OnePlus/Apple websites.

When Apple launched its most expensive iPhone yet, the iPhone X, jokes tumbled in on social media about a Chinese smartphone company coming out with a cheaper phone with the same features.

The latest flagship device of OnePlus was launched on Thursday night however much like Apple’s iPhone, the OnePlus 5T also had its share of leaks.

Apple’s iPhone X is selling in India for Rs 89,000 for the 64GB variant and goes above 1 lakh for higher storage variants.

The OnePlus 5T will be available in India from November 21 for half the price of the iPhone X.

Now the OnePlus 5T runs on Android 7.1.1 whereas the iPhone X runs on iOS 11. So without getting into the Android versus iPhone users debate we simply compare the features of the two phones.

The face recognition technology in the smartphone could be used for unlocking of the device although the Chinese smartphone company has kept the fingerprint sensor as well. The sensor has been moved to the back of the phone instead of the front.

Apple’s face ID does not only recognise ‘facial patterns’ but also detects body and facial features.

It has been ‘enabled by TrueDepth camera for facial recognition,’ the company said.

Camera: When it comes to camera features, the OnePlus 5T sports the same one that was present in the OnePlus 5. There is also a secondary camera for superior low light photography.

This camera comes with "Intelligent Pixel" technology which merges four pixels into one, reducing noise in low-light environments and enhancing clarity.

It is being hailed as a ‘fit for low-light photography’ camera.

In comparison, the iPhone X also offers a dual camera set-up which features optical zoom. This feature is not available in the OnePlus 5T.

Display: Much like Apple and Samsung, OnePlus has also joined the ‘bezel-less’ smartphones gang. The OnePlus 5T has a 6 inch OLED screen with an ‘edge-to-edge’ design.

While the iPhone X has a 5.8 inch OLED display and its ‘fingerprint-resistant oleophobic coating.’

Battery: OnePlus 5T comes with a 3300mAh battery that is estimated to last one day. The company also said the phone will gain a whole day’s power in just 30 minutes of charging.

The iPhone X on the other hand ‘lasts up to two hours longer than iPhone 7,’ the company said.

It has 21 hours talk time and also has a wireless charging feature.