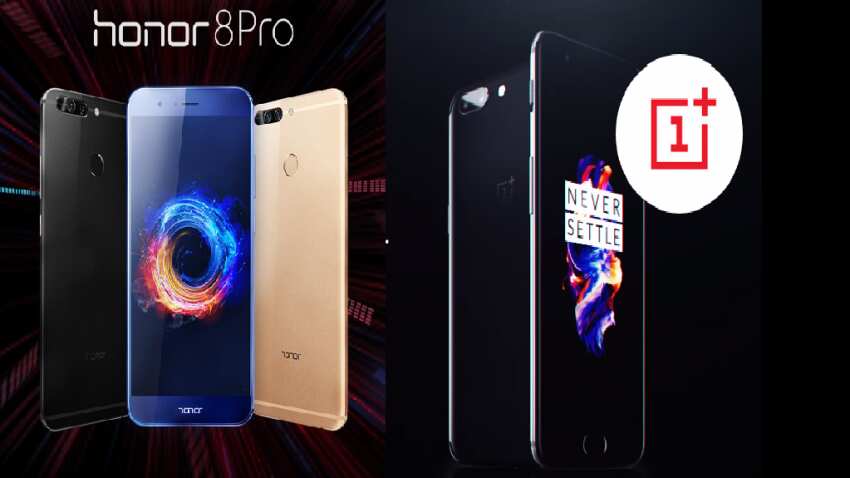 Two flagship duel-camera smartphones from two Chinese players -- one from Huawei under its sub-brand Honor and another from OnePlus -- have arrived in India.

On the other hand, OnePlus 5 has 5.5-inch, Full-HD display that, according to some users, shows a weird jelly-like effect while scrolling through an app.

In a statement regarding the issue, OnePlus said, "We`ve received feedback from a small number of users saying that at times they notice a subtle visual effect when scrolling. This is natural and there`s no variance in screens between devices."

While Honor 8 Pro has followed the trend of placing Fingertouch ID on the back (Samsung S8, Google Pixel devices has it there and upcoming iPhone 8 is also reported to have that at the rear), OnePlus 5 has it below the display.

The duel-SIM Honor 8 Pro houses 12MP duel-lens camera system with a neat flat back and no protrusion.

One other reason why Honor 8 Pro outclasses OnePlus 5 is that it can shoot videos in 4K quality. The phone also has several shooting modes, including 3D creator and a dedicated feature "Night Shot" for low-light photography.

To shutterbugs` delight, in its dual-camera system ("Pro Camera" mode), you can adjust the aperture from f0.95 to f16 (OnePlus 5 has a f/1.7 aperture) to give an artistic touch to images.

We also found a built-in 3D creator (nubia phones have this feature) that lets you create 3D images with animated effects.

The 8MP selfie camera returned quality images in both day and low-light conditions.

When it comes to the processor`s performance, OnePlus 5 outshines Honor 8 Pro. In terms of being the latest, the Kirin 950 processor in Honor 8 Pro cannot beat Qualcomm`s Snapdragon 835 in OnePlus 5.

But that does not mean Honor 8 Pro is slow. There was nothing to complain as the device handled multi-tasking like surfing and gaming easily.

Apart from offering a large battery, the Honor device has "Smart Power 5.0" technology that helped us maximise battery life by minimising power consumed by background apps -- a respite for those who do not want to carry power banks.

On a single charge, the battery lasted for more than a day on heavy usage like social media, gaming and both online and offline content consumption.

Huawei has also partnered with Gameloft and GoPro for in-built apps. On top of it, the smartphone comes bundled in a box that can also be used as a virtual reality (VR) headset.

Try to spot one when you go for this device.

Conclusion: Honor 8 Pro has the best camera in sub-Rs 30,000 category and outsmarts OnePlus 5 in every department. Period.