Priced at Rs 32,999 for the lone variant which comes with 6GB RAM and 128 GB storage variant, Honor 20 will be available on Flipkart. Here are 10 reasons why you could buy this flagship. 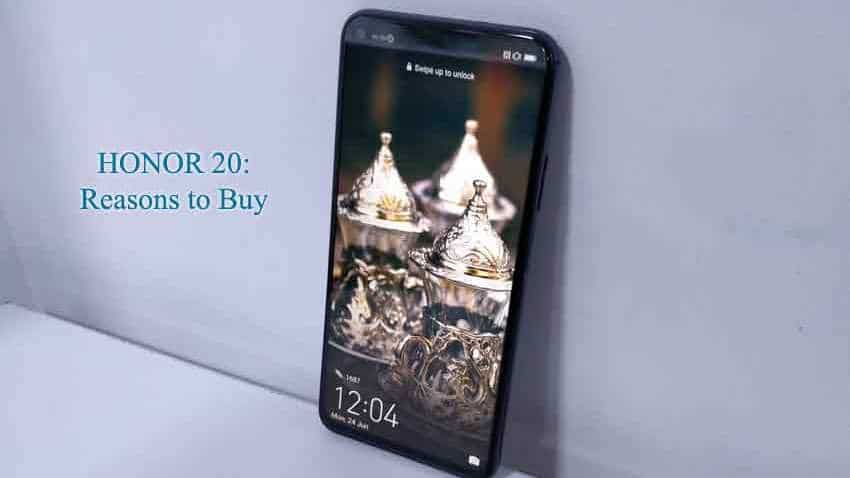 In the Indian market, it will take on the OnePlus 7, Oppo Reno and the Asus 6Z.

The Chinese smartphone manufacturer Huawei is going through tricky times. While the company’s business took a major hit after the US dispute, creating confusion for customers as well, its sub-brand Honor has dropped probably its best smartphone till date – the Honor 20. Launched about two weeks ago in India, the Honor 20 is the standard variant in the series which also includes the Honor 20i and the Honor 20 Pro.

The more affordable Honor 20i went on sale in India last week and the Honor 20 will up for grabs for the first time in the country tomorrow. Priced at Rs 32,999 for the lone variant which comes with 6GB RAM and 128 GB storage variant, the smartphone will be available on Flipkart. In the Indian market, it will take on the OnePlus 7, Oppo Reno and the Asus 6Z. This, also creates a lot of confusion for the customers. All the four smartphones come with almost similar price tags, making the decision more tough.

We have spent about two weeks with the Honor 20 and would publish a detailed comparison with smartphones later. But, for now, here are 10 reasons why you could buy this flagship –

1. Honest price tag – With the smartphone manufacturers flooding the market with plethora of options and top-class features, it is tough to rate a device on the basis of what it offers. Instead, a better way to look them is through the price tag. This is where the Honor 20 excels. About two years ago, the OnePlus 5 was launched with a 16MP + 20MP dual camera and Snapdragon 835 processor, priced at Rs 32,999 – exactly what the Honor 20 would cost you but with much superior specs.

2. Compact Design – With more and more smartphone manufacturers serving bigger screens for customers with higher media consumptions, there are very few compact devices left in the market, specially in the premium segment. This could be the biggest selling point of the Honor 20. We have personally seen people struggle to find smaller units. Even though it comes with a 6.26-inch display, the smartphone fits perfectly in the palm and could solve the issue. 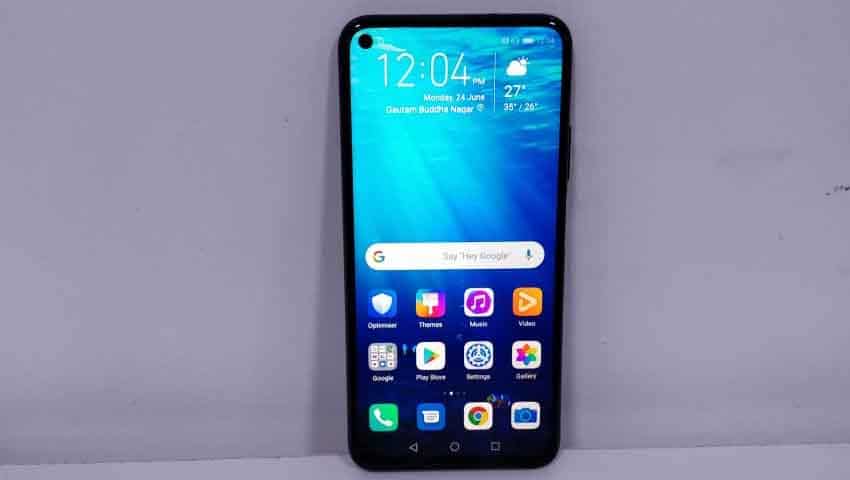 3. Quad-camera setup – While most smartphone manufacturers are still trying to accommodate a triple rear camera module, Honor has gone one step up, introducing a quad camera setup with the Honor 20 series. There is a 48-megapixel Sony IMX586 primary sensor with f/1.8 the aperture, assisted by a 16-megapixel super wide-angle camera, and two 2-megapixel sensors - one for depth sensing and the other is a macro lens. On the front, it has a 32-megapixel selfie camera just like the Pro variant. 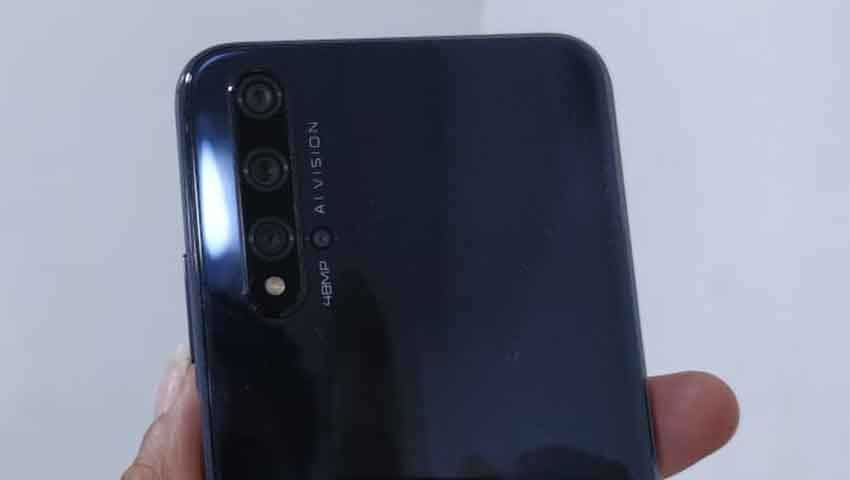 4. Super Macro Mode – We clicked a lot of few pictures with the Honor 20 and the results were impressive, both in natural light and indoors. But, what impressed us the most is the Super Macro Mode that allows you to click clear pictures from a distance of just 4 cm. How much you actually use this feature would be interesting to see.

5. Superfast processor – Honor has used Huawei's in-house HiSilicon Kirin 980 SoC on the Honor 20. The processor also powers the Huawei Mate 20 Pro and the Huawei P30 Pro. Coupled with 6GB RAM, it gives you a seamless experience during multitasking and gaming. You hardly come across any lag even while playing high resolution games like PUBG or Asphalt 9. 6. Massive battery – The Honor 20 is powered by a 3,750 mAh battery. Now, you may find a lot of smartphones with bigger battery in the market but surprisingly, the Honor 20’s battery simply refuses to drain. It could be because of the limited use but even then the results were impressive.

7. Quick charge – Even if you manage to run the phone out of battery, the Honor 20 comes with support for 22.5W fast charging. Also, the company claims that its fast charging can take the phone from 0 to 100 per cent in 30 minutes.

8. Unique placing of fingerprint scanner – So many years and humans are yet to figure out where to put the fingerprint scanner. It has been put on the front, at the back and within the display as well. But, Honor has placed the scanner on the power button itself, making it easier to reach, even if you prefer single hand use. Also, the scanner is very accurate, opening the phone almost instantly.

9. No Jack – Some people may argue how this could be a reason to buy the smartphone! Well, let’s be honest with ourselves. With a number of exciting wearables and Bluetooth audio options available, the usage of 3.5 mm jack has gone down. In case you still want to use it, there is always a connector.

10. Classic colour options – Honor has launched the smartphone in two simple and yet classic options, making it suited for users looking for a more understated design. You can buy the phone in either Midnight Black colour or Sapphire Blue variant. 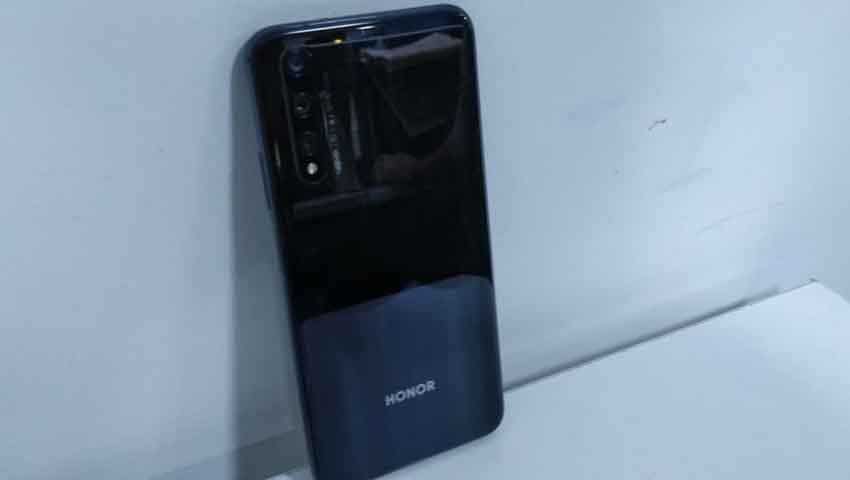 Also, Honor is offering up to 90 per cent Buy Guarantee in 90 days as part of its ‘Love it or return in challenge’.

The only problem you could face with the Honor 20 is the placing of its speaker. There is a chance that while gaming or watching movies you might end up covering the speaker with hand. This could lead to audio disturbance. Also, the audio output is not that great in general and leaves you asking for more.

(Disclaimer: The recommendations are based on our usage of the phone. You are advised to check the features, specifications and other details before making the purchase.)