Google is celebrating its 23rd birthday with a special cake-themed doodle that one can see today on the home page of Google. 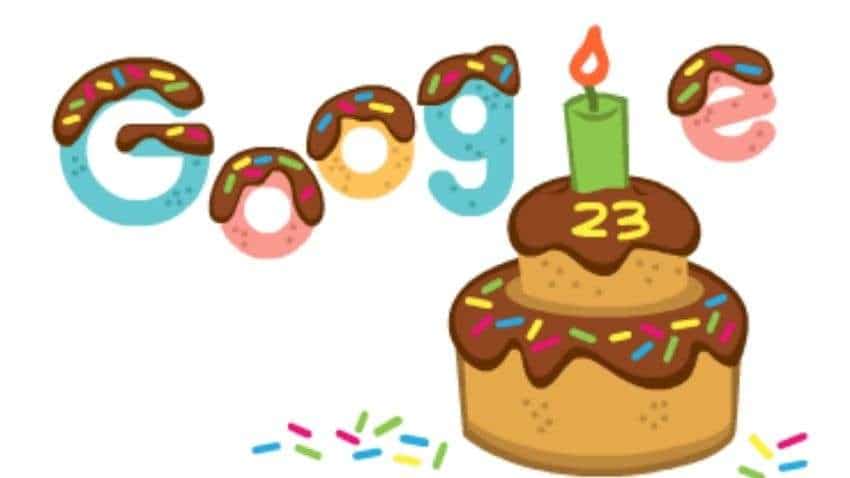 Google is celebrating its 23rd birthday with a special cake-themed doodle that one can see today on the home page of Google. Source: google.com
Written By: ZeeBiz WebTeam
Edited By: Ravi Kant Kumar
RELATED NEWS

Google Turns 23 Today: Happy Birthday Google! Google is celebrating its 23rd birthday with a special cake-themed doodle that one can see today on the home page of Google. The animated doodle features a cake with '23' written on top of it, with a birthday candle indicating "L" in 'Google'.

Google was founded by Larry Page and Sergey Brin in September 1998, as part of a PhD project. In a blog by Google, it said, "It’s said that one chance encounter can change the course of your life. In Google’s case, a chance encounter between two computer scientists changed the course of the Internet and the lives of millions."

This 'chance encounter' has also been explained in the blog post. The post said that in 1997, Sergey Brin, a graduate student at Stanford University, just so happened to be assigned to show Larry Page, who was considering Stanford for graduate school at the time, around campus. It further added, "By the next year, the two Google co-founders were building a search engine together in their dorm rooms and developing their first prototype. In 1998, Google Inc. was officially born."

It has to be noted that every day, there are billions of searches on Google in more than 150 languages around the globe. Though much has changed from the early days of Google, from its first server housed in a cabinet built out of toy blocks to its servers now being housed in more than 20 data centers globally, its mission of making the world’s information accessible to everyone remains the same.

An ANI report stated that according to reports, in 2005, the company changed the birth date to September 27 to make it coincide with the announcement of the record number of pages that the search engine was indexing.