Google Tez may have got 7.5 million users in 5 weeks, but many are still unhappy

Many of the comments by users have been negative as users often have complained against money being deducted from their account but not being delivery to the receiver.

Google, CEO, Sundar Pichai in his recent earnings call for Alphabet Inc's earnings spoke to analysts about Google Tez, its payments app launched in India last month. In the call Pichai boasted that Google Tez had already has over 7.5 million users in just five weeks since its launch in India.

Pichai further added that Tez has been used to make over 30 million transactions. He also said that he is really excited about the potential this brings for India's mostly cash-based economy, according to a NDTV report.

The numbers can be true as according to Google Play figures the Tez app has installs between 5 million to 10 million. While this may be so, there are several reviews still regarding issues that users are been facing with the app.

Many of the users claimed of losing the money during the transfer process, as the money was deducted from their account but did not make it to the beneficiaries account. And these are not even the negative comments which were given by users on the day of the launch of Google Tez. These are users feedback as old as last week. 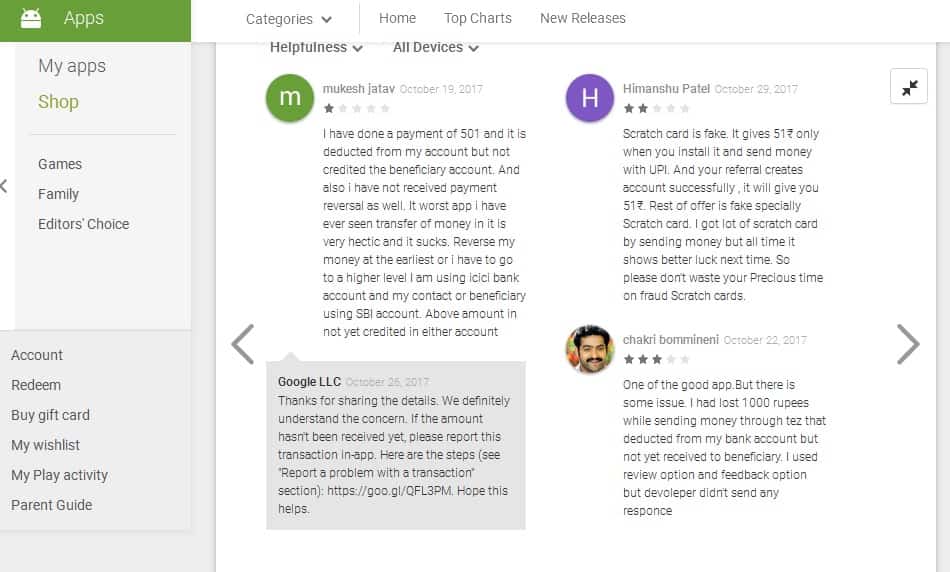 While many other users seemed to be using the app for the referral and scratch card scheme where people get Rs 51 on referring someone to use the app. This seems like people trying to game the system to earn a few extra bucks.

On top of this, some users have even complained about the referral offer and the scratch cards as they did not receive the money in their account that they were promised.

So while Pichai may have to relook at how successful Tez really is, as for Google getting over 7.5 million users to test your payment app is not a big achievement considering the name and products Google is synonymous with. However, what counts for Pichai is the repeated users Tez is able to keep in this highly competitive space.

Google Tez is based on the Unified Payments Interface (UPI) platform by NPCI payments platform for the country.