Four tips for making most use of Samsung Galaxy Note 9’s Powerful S Pen; Find out

Over the years, the company has upgraded its Galaxy Notes trademark tool with innovations that have transformed the way users manage their mobile lives. 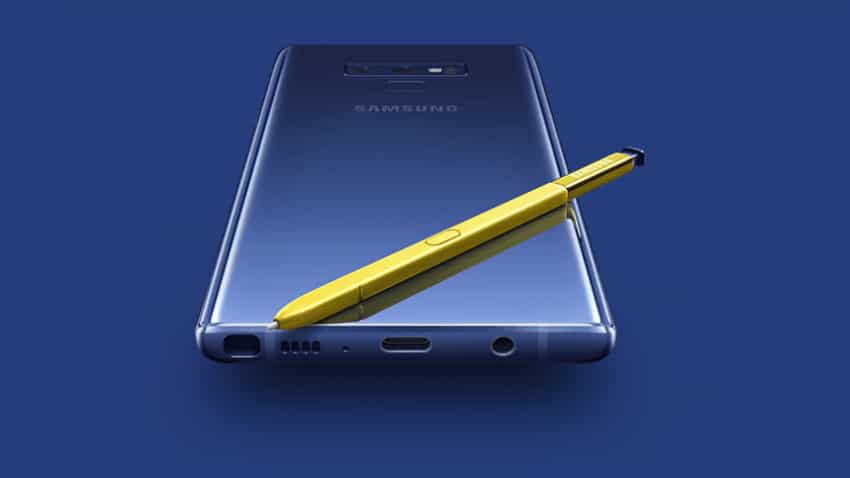 Samsung Galaxy Note 9 priced at Rs 67,900 in India will be available on Flipkart

When Galaxy Note 9 was designed, the South Korean Samsung Electronics aimed to offer users the levels of power and performance they need to get the most out of work, play and everything in between. Over the years, the company has upgraded its Galaxy Notes trademark tool with innovations that have transformed the way users manage their mobile lives. Perhaps no feature embodies this all-encompassing approach to productivity more than the Galaxy Note series’ signature stylus: the S Pen.

The company on its website has given four tips in making most use of Note 9’s S Pen.

Samsung says, “Here, we’ll show you how to utilize the S Pen’s new Bluetooth Low-Energy (BLE) connectivity and other convenient enhancements to enjoy a more fun (and efficient) mobile experience.” Let’s check them out.

Users can customize clicks of the S Pen’s button to perform specific actions within specific apps. Single clicks and double clicks can designate different actions, while holding down the pen button can be assigned to opening other apps and the S Pen features.  The S Pen’s single and double press functions are compatible with more than 10 apps and is expected to expand to further apps thanks to the S Pen’s open SDK. This means that you can open the camera by holding down the S Pen’s button, click once to take a picture and twice to switch cameras, without the need to touch the smartphone’s screen at all.

You can pick and choose which remote control functions you’d like to enable by accessing the S Pen’s settings.

Flex Your Creative Muscles with Photo Drawing and Live Drawing

Photo Drawing allows you to use the S Pen to draw over images as you would with a sheet of tracing paper. Once you’re finished, you can delete the original photo or drawing and save your new creation as a separate image. 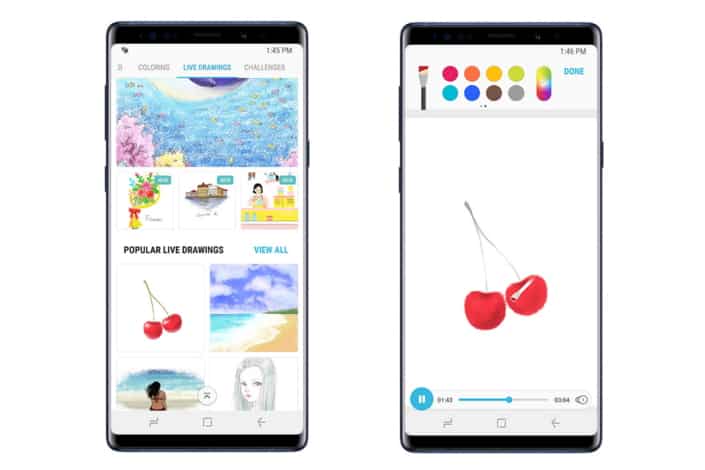 Live Drawing, meanwhile, allows you to see for yourself how seasoned S Pen artists create impressive works of art. The feature’s wide selection of step-by-step tutorials offer simple instructions for drawing everything from everyday objects to cute characters and scenic landscapes.

From a simple selfie, the function automatically generates a total of 36 sharable stickers that feature your unique AR Emoji expressing a wide range of emotions. 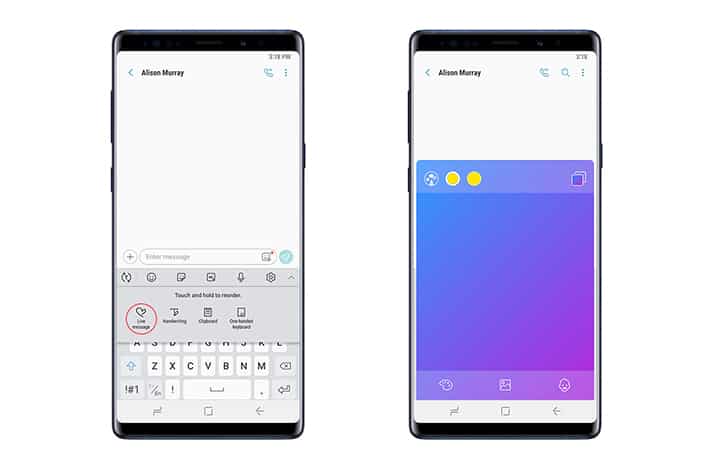 The combination of AR Emojis and Live message creates a unique way to make your messages more personal, and makes messaging friends and family that much more fun.

Screen off memo has been a user-favorite feature ever since it was first introduced with the Galaxy Note5.

The Galaxy Note9 has made Screen off memos more dynamic by adding color to the mix. Now, when users compose a note, the S Pen’s markings match the color of the S Pen itself—either yellow, light gray, lavender purple or metallic copper. Users who prefer Screen off memo’s classic gray pen can easily select this option in the function’s settings. 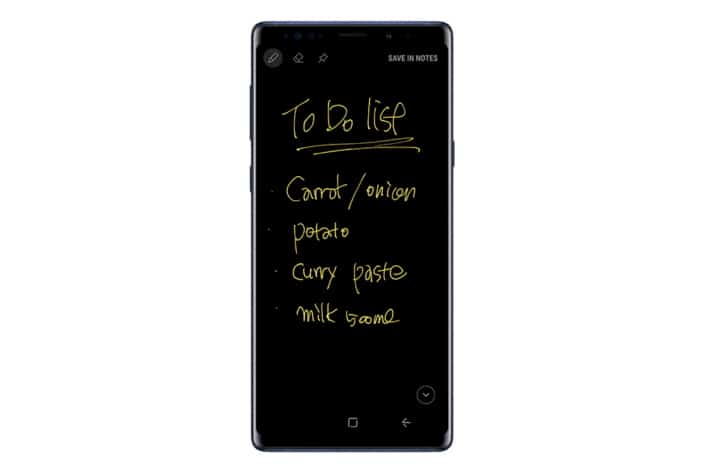 Further, the S Pen’s Air command menu offers users instant access to some of its most convenient functions. It can be accessed simple by taking out the S Pen or by hovering S Pen over the screen then clicking the S Pen’s button. 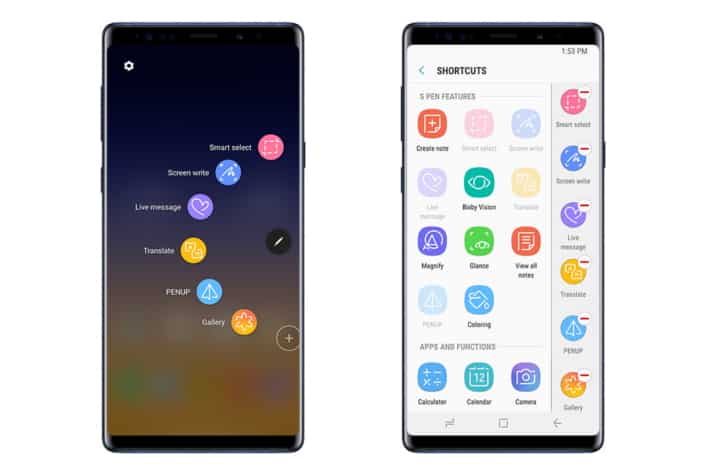 Going ahead, air view is another convenient function that offers instant insight into your phone’s content, simply by hovering the S Pen over the device. With Air view, you can see a short preview of your schedule in the Calendar app, text of webpages, and enlarged thumbnails of your pictures saved in the Gallery. 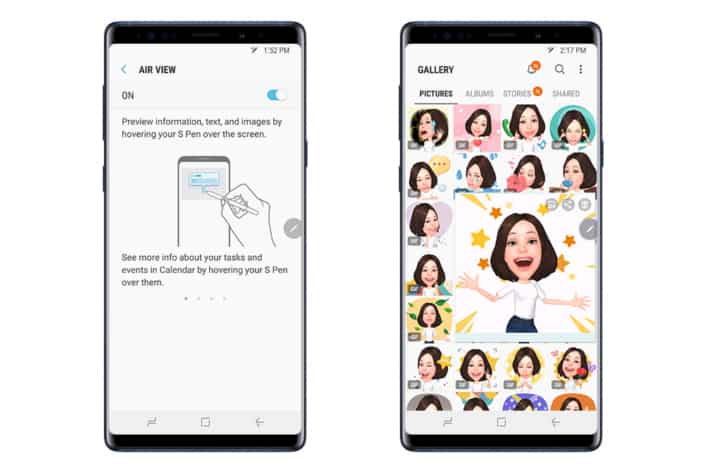 Therefore, if you own a Galaxy Note 9, you might want to check the above mentioned features the S Pen offers to you in order to enjoy the smartphone to the core. Galaxy Note 9 focuses in bringing greater convenience and fun to both work and play.

Samsung Galaxy Note 9 priced at Rs 67,900 in India will be available on Flipkart