Xiaomi Redmi Note 4 will go on sale on Flipkart on August 16. Here are all the details. 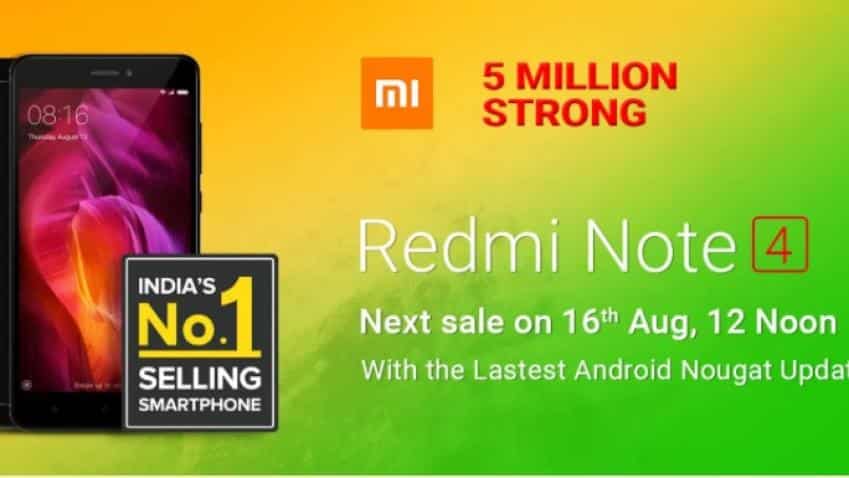 Redmi Note 4 will run on MIUI 8, which is based on Android 6.0.1 Marshmallow. Image Source: Flipkart official website
Written By: ZeeBiz WebTeam
RELATED NEWS

Flipkart has announced the next sale for Xiaomi Redmi Note 4 on its website which will begin on August 16 at 12 noon.

As per the Flipkart banner, the latest version of Android Nougat Update will be available on the phone. Xiaomi has been advertising for the new update on Remi Note 4 for a while now.

Redmi Note 4 will run on MIUI 8, which is based on Android 6.0.1 Marshmallow.

Flipkart has held many sales for the Redmi Note 4 in association with the smartphone’s official website Mi.com. The company said it is ‘India’s number 1 selling smartphone.’

Earlier in August, Flipkart was selling the Redmi Note 4 with up to 12000 off on Buy with Exchange deals along with ‘Buy Back Guarantee.’

As on August 12, Flipkart said it had sold 50 lakh Redmi Note 4 smartphones on its site. It had completed the ‘No. 1 selling smartphone,’ during the period May to August this year, Flipkart said.

The Redmi Note 4 is a dual SIM phone with a 13-megapixel primary camera and a 5-megapixel front camera. It also packs a 4,100mAh battery.

The smartphone can create two accounts with its ‘Dual Apps’ feature on social media sites like WhatsApp and Facebook.

The new Mi Dialer will allow customers to search for business contacts apart from phone contacts and supports Hindi input.

It will separate business and personal messages and defines action on certain messages.

The new update will also include file transfers across PC, mobiles and Mi drop for other Mi devices. It has an image and video editor and allows for cutting and adding effects.

Also Read:  How Flipkart is trying to sell Redmi Note 4 for Rs 999