The E3 2017 expo is one of the main events gamers and game developers look out for as it gives a glimse into the developments that will be released during the year. 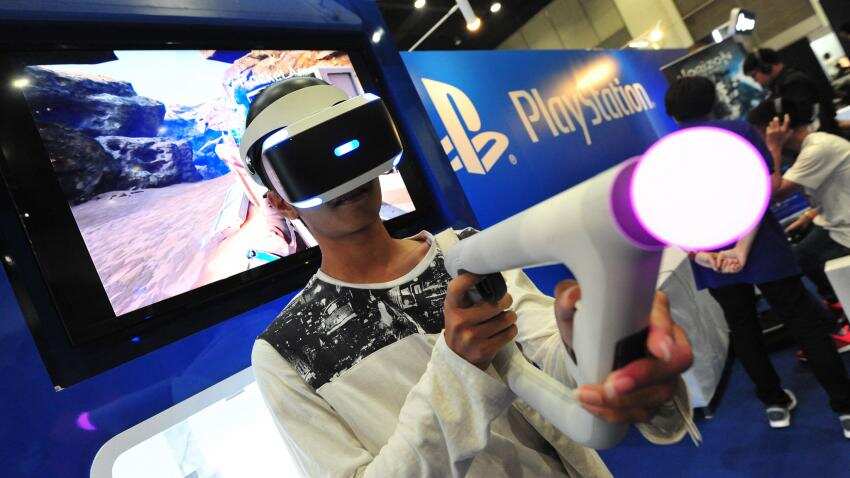 A person trying out a VR game at the E3 2017 expo. Photo: IANS
Written By: ZeeBiz WebTeam
RELATED NEWS

The Electronic Entertainment Expo 2017 or commonly known as the E3 2017 begins tomorrow on June 13 – 15, 2017 in Los Angeles is one of the top electronic and gaming expos in the world and gives a glimpse into what is in store to launch this year.

Some of the biggest game launches this year to be unveiled at the E3 Expo 2017 is Microsoft Xbox One X, which it unveiled a day before the expo, also there are expected to big announcements from Sony, Nintendo and some other publishers.

Microsoft unveiled its new console the Xbox One X which it claims to be the most powerful game console to date. It is by far the highlight of the E3 2017 expo as it comes with ultra high-resolution 4K capabilities and a processor with liquid-cooling technology.

This came after months of speculation of the launch of 'Project Scorpio' which was an adopted name for the new Microsoft video game console.

It is the smallest console in the Xbox family and will go on sale worldwide on November 7 for $499 (about Rs 32,000) and will be compatible with all current Xbox One games and accessories.

It has the graphics processing Unit (GPU) of running at 1172 MHZ and the console's processor also features a liquid-cooled vapour chamber.

The hardware of the new Microsoft console is competing against its latest rival, the Sony PlayStation 4 Pro, with its cutting edge graphics processing features like six-teraflop GPU and 12 GB of GDDR5 RAM.

Thanks to this initiative, users of the popular games "Gears of War 4", "Forza Horizon 3", "Killer Instinct", "Halo Wars 2" and "Minecraft" will receive free upgrades to 4K for their games. This applies to about 30 titles from third-party developers such as "Final Fantasy 15" or "Resident Evil 7".

Sony could respond to the launch of Microsoft's Xbox One X launch with a dip in the price of the PlayStation (PS) 4. The PS4 Pro model which is now available at $399 which is similar to the $400 price of the Xbox One X may see a reduction in its price to $300 (about Rs 19,300).

It will also launch the PS4 for $249 during the E3 2017 expo with extra discounts on the games and accessories.

Nintendo is expected to reveal more details about a new online service launching next year for Switch. It is expected to feature a subscription offering with competitive online play and access to older games from their library.

The Nintendo Switch was the fastest-selling console even when it launched in March and has a small selection of games such as the The Legend of Zelda: Breath of the Wild, Mario Kart 8 Deluxe, ARMS.

There are expected to be more games unveiled for the Nintendo Switch this year.

Games to watch out for:

Some of the games expected to be unveiled for the Xbox One X include Forza Motorsport 7 and action-adventure game Sea of Thieves.

For the PlayStation we could see games such as the anticipated Last of Us sequel, Last of Us: Part II and new installment of 'Uncharted' series.

We may see Nintendo launch its latest Mario game the 'Super Mario Odyssey' which gives players a chance to move around the world in Mario's shoes.

Other games which may come out include the new Call of Duty: WWII, which is based on the missions during World War II.

Ubisoft also said that it would be launching a few games which include 'South Park: The Fractured But Whole' and 'Far Cry 5'.

There will be 128 exhibitors that will showcasing their developments in the VR space. This is a 130% increase from last year. This year it is expected that there won't be much new in hardware, but you can expect to see a lot of new concepts, licensed virtual rides and short films. There will also be mini-games that Rift, Vive and PlayStation VR players can try.

There are expected to be 15,000 consumers which will be joining the conference this year, and it will be good to see how people take on to virtual reality. VR has not yet picked up in its current form as there have been many headsets but has not seen many takers even among gamers.