Chingari app gets over 25 lakh downloads on Google Play Store

After the resounding success of Mitron app, India has got another alternative to short video sharing platform TikTok. Chingari app, which is being touted as a new "Indian alternative" to TikTok, has crossed over 25 lakh downloads on Google Play store. 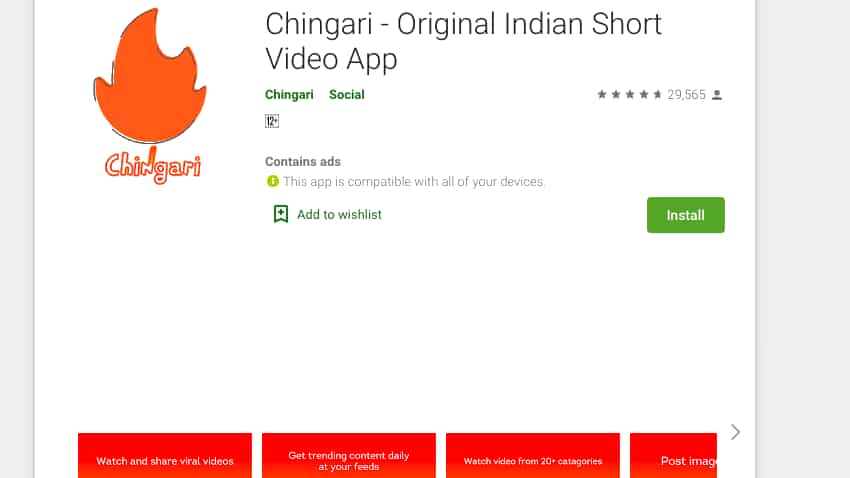 The platform is funded by two Bengaluru-based programmers, Biswatma Nayak and Siddharth Gautam. It was launched on Google Play Store in November 2018 and made its way to Apple’s App Store in January 2019. Chingari app is free to download and allows users to view or upload short videos on the platform. Users can watch the video by scrolling up or down, without signing in.

To upload the content, users will still have to log in to the app. Chingari users get points (per view) for their videos, which later can be redeemed for money. The Chingari app also offers access to trending news, entertainment news, quotes, and memes as well.

The short video-sharing app has decent reviews on Google Play Store with an average rating of 4.7 out of 5. The app is also available to download via Apple App Store where its average rating is of 3.9 out of 5.

Last week, the Mitron app had crossed one crore downloads on Google Play Store. The app was launched just over two months ago, as people starting giving negative ratings to TikTok. Mitron app also gained popularity after a strong anti-China sentiment among people. Mitron currently has favourable reviews with an average rating of 4.5 out of 5.

Mitron app had hit a roadblock last month when it was removed from Google Play Store. However, the tech giant restored the app, once the developers corrected the source code. Many users had also claimed that the short video platform included "a lots of bugs" and was just another TikTok clone available in Google Play.