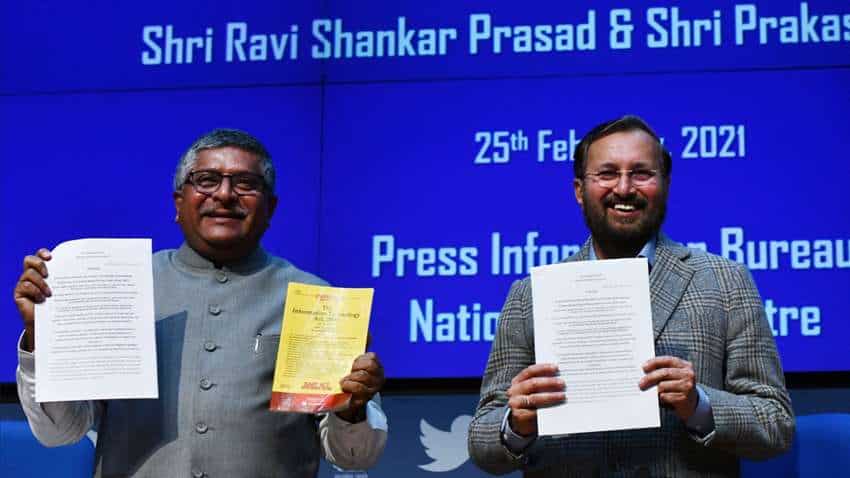 The government mandated the firms to appoint grievance officer, disclose the first originator of the mischievous information and remove, within 24 hours, content depicting nudity or morphed pictures of women. Concerns have been raised about rampant abuse of social media platforms and spread of fake news and the government is bringing in a "soft touch" regulation, IT Minister Ravi Shankar Prasad said while announcing the new guidelines.

As per the new rules, social media intermediaries have to appoint grievance officer, who shall register complaints in 24 hours. The grievance redressal official must be resident in India, and monthly compliance reports will have to be filed by social media platforms.  Social media platforms on being asked by court or government will be required to disclose the first originator of the mischievous information.

"The government welcomes criticism and right to dissent but it is very important for the users of social media to have a forum to raise their grievance against the misuse of social media," Prasad said. "The social media platforms upon being asked either by the court or by the Government authority will be required to disclose the first originator of the mischievous tweet or a message,"Prasad added.

"The laws made for significant social media will be implemented within 3 months so that they can improve their mechanism. The rest will come into effect from the day the rules are notified," Union Minister Ravi Shankar Prasad confirmed.

"Every social media platforms are welcome in India but there shouldn't be double standards. If attack takes place on Capitol Hill, then SM supports police action but if there's aggressive attack on Red Fort, then you've double standards. This is plainly not acceptable," Prasad added.

"Social media platforms must have a provision for the voluntary verification mechanism of the users," Prasad said. Further, he added, "If you seek to disable access to the content of any social media user, you are required to give him reasons and also hear him."

"Social media platforms on being asked either by court or govt authority will be required to disclose 1st originator of mischievous tweet or message. This should be in relation to sovereignty of India, security of state, relations with foreign states, rape etc," Prasad said.

-OTT and Digital news media have to disclose their details

-Self regulatory body headed by retired SC or HC judge."

"There should be a grievance redressal system in OTT platforms and digital portals. OTT platforms will have to have a self-regulating body, headed by retired Supreme Court or High Court judge or very eminent person in this category," Union Minister Prakash Javadekar said.

"For OTT, there should be self-classification of content -- 13+, 16+ and A categories. There has to be a mechanism of parental lock and ensuring compliance that children don't see that," Prakash Javadekar added.

Twitter Spaces now available to all users on iOS, Android

Twitter says it removes over 1 million spam accounts each day