Best smartphones of 2019 in India: 2019 is set to end and what an year it has been for smartphone lovers. Samsung, Realme, OnePlus, Xiaomi, Asus and other brands introduced several exciting devices. We recently sat together to discuss this year's top 10 Android smartphones in this week's Tech Top 10. You can watch the video here followed by the full list. 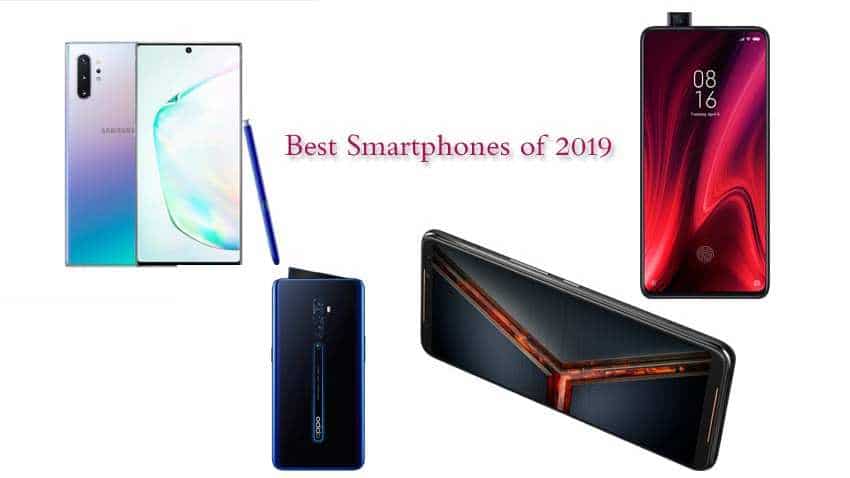 Even as the budget segment continued to flourish in 2019, it was the mid-range segment that got the biggest boost. Xiaomi, Realme, Samsung and Vivo among others targeted the sub-Rs 20,000 segment aggressively.
Written By: Manas Tiwari
Edited By: Harish Dugh
RELATED NEWS

Best smartphones of 2019 in India: Last 12 months have been nothing but exciting for the smartphone industry. While the buyers have been served with several new technologies, sellers have managed record sales. The foldable phone was probably the most exciting phenomenon of 2019 and we finally managed to get hands on one such device - Samsung Galaxy Fold. The smartphone makers also identified how more and more users are using their phones to consume media and consistently tried to reduce bezels by using pop-up mechanisms and punch-hole designs.

Even as the budget segment continued to flourish in 2019, it was the mid-range segment that got the biggest boost. Xiaomi, Realme, Samsung and Vivo among others targeted the sub-Rs 20,000 segment aggressively offering several flagship-level features at an affordable price point. The concept of affordable flagship smartphones was also adopted by several brands and gaming too became quite popular.

As 2019 comes to an end, we sat together to discuss this year's top 10 Android smartphones in this week's Tech Top 10. You can watch the video below followed by the full list -

Our Verdict: Samsung Galaxy Note 10+ is the most exciting smartphone to have launched in 2019 and undoubtedly, the best Android phone till date. It does come with a few flaws, but offers a top-quality display, a power packed performance, great camera specs and something that you don't get on any other device - the S Pen. For some, the Galaxy Note 10+ might be a bit pricey, but you get what you pay for. And, if you have the money, spend it on this smartphone to get a truly amazing experience.

Our Verdict:  Realme X2 Pro turns out to be a great flagship level smartphone from Realme with several premium features like 64-megapixel camera, higher refresh rate, more powerful chip and unbelievably fast charging. At Rs 29,999, the base variant of this smartphone is a total steal against the Redmi K20 Pro which is powered by Qualcomm Snapdragon 855 processor and uses a 60Hz display. Even the 12GB RAM variant seems like value for money at this point against the OnePlus 7T which offers you up to 8GB RAM for Rs 39,999.

However, to say that Realme X2 Pro is a perfect device, would be wrong. The software on this one remains the key issue for both the manufacturer as well as customers. Significantly, this is an area where OnePlus has a massive lead over its competitors, but even then, Realme has really pushed the limits with X2 Pro and set new benchmarks.

Our Verdict: The OnePlus 7T offers a powerful processor, good camera combination, super fast charging and a smooth display for less than Rs 40,000. All of these make the OnePlus 7T a good buy. However, we would advise you to switch only if there is a need because the way technology is evolving or OnePlus 8 might make you regret the decision.

Our Verdict: The Redmi K20 Pro comes with a Snapdragon 855 processor, Super AMOLED screen, triple rear camera with 48MP primary sensor, 8GB RAM and pop-up selfie camera - almost everything that you get on the OnePlus 7 Pro. Given that this is the first time Xiaomi has come up with a flagship device under the Redmi series and included new features like pop-up selfie camera and an AMOLED display, it has done a great job. There are certain areas that need polishing for the K20 Pro to be a true flasghip killer but we must admit that its almost there.

Our verdict: Asus ROG Phone 2 has set a new benchmark when it comes to performance. It is the most powerful smartphone to arrive in India, both Android and otherwise. Moreover, it is an exciting device that you would love to explore and play around with.

The only challenge Asus would face in selling this device is that ROG is still not so popular-a-name among Indian smartphone buyers. Brands like OnePlus and Samsung have greater recall value. This makes it tough to convince a buyer to switch to Asus ROG Phone 2. Also, customers still see gaming as a niche. However, this smartphone is a giant leap in bridging that gap. It will push other manufacturers to up their game and offer better gaming specs at a more affordable price point.

Our verdict: The highly-awaited mid-range smartphone from Xiaomi was the first to come with in-built Alexa support in India. It ticks all the boxes when it comes to expectations from a mid-range device. It features a 6.53-inch full-HD+ (1080x2340 pixels) display and is powered by MediaTek's new gaming-focussed MediaTek Helio G90T chipset. It comes with liquid cooling support to improve the gaming experience. The biggest highlight of the device is its rear camera setup that includes four lenses. The main 64MP shooter is assisted by the same camera setup as the Redmi Note 8 - 8-megapixel wide-angle shooter and two 2-megapixel cameras. On the front, there is a 20-megapixel selfie camera. It packs a 4,500mAh battery with support for 18W fast charging.

Our verdict: Asus has taken a bold decision to experiment with the already evolved front camera and deserves applause for the same. It has come up with a highly impressive device that delivers powerful performance, superior graphics and high quality images. Also, there are very few smartphones available in the market that offer both, a Type-C port and a 3.5mm jack. The camera delivers what the company aims to and is a fun change to have. The processor is as good as it get and the only disappointment is the average display. Overall, Asus has come up with an all-rounder that tries to meet all your expectations, making the 6Z a great bet at this price point.

Our Verdict: The Oppo Reno 2 is one of the most stunningly designed smartphones of 2019 and the shark-fin front camera adds to its beauty. The smartphone comes with 6.55-inch AMOLED Panoramic notch-less display with 20:9 aspect ratio, Gorilla Glass 6 protection, and 93.1 percent screen to body ratio. It is powered by Qualcomm Snapdragon 730G octa-core SoC paired with 8GB RAM. You get 256GB internal storage on the phone. The Oppo Reno 2 packs a 4,000mAh battery with VOOC Flash Charge 3.0 support.

Our Verdict: The Vivo Z1Pro emerges as one of the better smartphones in this segment. It gives tough competition to other devices, at least on the performance front. If you are into gaming, this is probably the right fit for you. And, having a massive battery only helps Z1Pro's case. The camera isn't the strongest points but does a decent job for the price tag. Overall, the Vivo Z1Pro is a powerful gaming smartphone that should satisfy customers looking for similar option in the budget segment

Our Verdict: Priced at Rs 13,999 for the 4GB RAM and 64GB storage variant, the smartphone competes in a segment that has been flooded with options by smartphone makers this year. The top-end model that comes with 6GB RAM and 128GB storage variant has been priced at Rs 16,999. While you might find features like Super AMOLED display and 48MP triple rear camera on several other smartphones at this price point, what differentiates the M30s from others is its 6,000 mAh battery.

If you are one of those who don't like to use a portable charger or frequently forget to charge your device, then this smartphone is no less than a gift. But, if you prefer more compact devices than the segment offers several other options like Realme 5, Vivo Z1x and Redmi Note 7 Pro as well.