Google has announced the Android 12 mobile operating system (the next big Android version) At the Google I/O conference 2021. It features bigger buttons, a large clock on the home screen that changes in size depending on how many notifications appear. 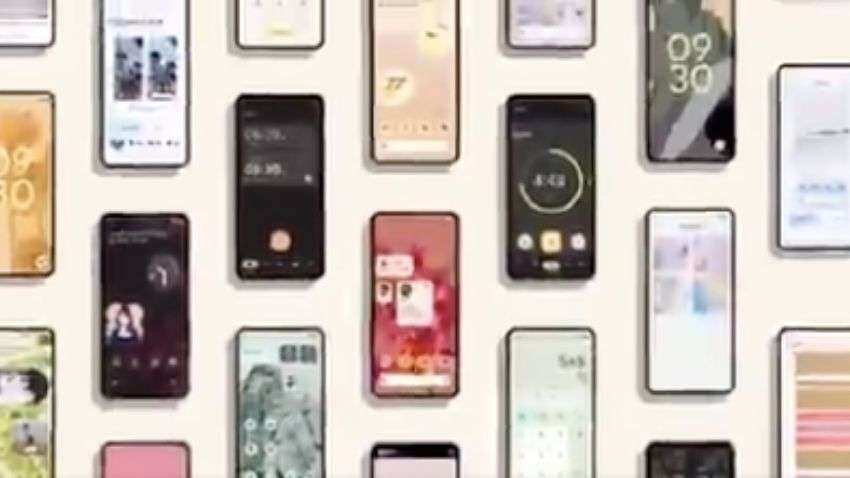 Android 12 is coming out later this year to several Pixel devices as well as many third-party Android devices. Source: Google

Android 12 update download: In major good news for Android smartphone users, tech giant Google has announced the Android 12 mobile operating system (the next big Android version) At the Google I/O conference 2021. It features bigger buttons, a large clock on the home screen that changes in size depending on how many notifications appear.

Android 12 is coming out later this year to several Pixel devices as well as many third-party Android devices, with partners like Asus, OnePlus, Xiaomi, Oppo, Samsung, and more.

The notification shade is more intuitive and playful, with a crisp, at-a-glance view of users' app notifications, whatever users are currently listening to or watching and Quick Settings that let them control practically the entire operating system with a swipe and a tap, the news agency IANS reported.

Android 12 includes new features that give users more transparency around which apps are accessing their data and more controls to make informed choices about how much private information your apps can access. The new Privacy Dashboard offers a single view into permissions settings as well as what data is being accessed, how often and by which apps. It also lets easily revoke app permissions right from the dashboard.

"We have added a new indicator to the top right of your status bar so you know when your apps are accessing your microphone or camera. And if you want to remove app access to these sensors for the entire system, we have added two new toggles in Quick Settings," Sameer Samat, VP of Product Management, Android and Google Play, said.

According to the report, beyond these new privacy features in Android 12, the company said it is also building privacy protections directly into the OS. Android 12 is packed with other useful experiences, like improved accessibility features for people with impaired vision, scrolling screenshots, conversation widgets.

Google has launched Android 12 Beta 1 that brings the next version of the mobile OS to even more Pixel owners with installation now possible through a simple sign-up. This "initial beta-quality release" is available as an OTA update to early adopters that enroll in the Android Beta programme.

TO INSTALL THE ANDROID 12 BETA

The process of how you get Android 12 beta on your phone ranges from requiring just a few clicks to something more involved. For this beta download, it’s considerably easier to get the it on one of the supported Google Pixel phones, the verge reported.

For a Pixel, begin by visiting the Android 12 beta site to enroll your phone in the beta. You should be able to find your phone listed when you click “View your eligible devices.” After you enroll your device, you might be nudged via a notification on your phone that the software is ready to install. If you want to check manually, open the settings menu on your phone, then head to System > System Update. Tap “Check for update” to see if you can download the new software.