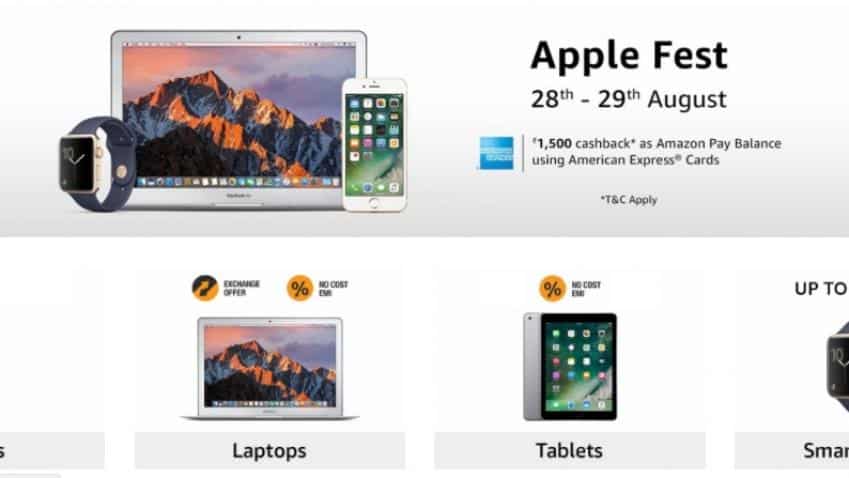 The company is offering up to Rs 1500 cashback on use of American Express cards on purchase of – Apple phones, laptops, tablets and/ or watches. Image Source: Amazon India website
Written By: ZeeBiz WebTeam
RELATED NEWS

Amazon India has started its Apple Fest which began on August 28 and will last up till August 29 and is a sale on products of Apple Inc.

In keeping with the sale, the company is offering up to Rs 1500 cashback on use of American Express cards on purchase of – Apple phones, laptops, tablets and/ or watches.

The customers will get the cashback in their Amazon Pay wallets. “This is a Flat Rs1,500 cashback on the list price. So, the maximum cash back possible per AMEX Cardholder across Amazon.in Site and App is Rs1,500. The cashback is valid only once per card account,” the company said.

The cashback will be credited to the customer’s Amazon Pay Balance account latest by 29 October, 2017. However those customers opting for EMI on purchase will not be able to avail this cashback offer the company said.

Amazon is offering deals on Apple mobiles, laptops, tablets and smartwatches. Here are all the deals listed on the e-commerce website.

The company is also offering Rs 13,613 off on its ‘With Exchange offer,’ where customers can trade in their old phones for the new Apple iPhone 7.

Discounts on other models of Apple iPhones are also available on the site.

Amazon is offering a flat Rs 1500 cashback plus no cost EMI up to Rs 18,000 on exchange of old laptops during this Apple Fest.

The company is offering deals on Apple MacBook Air Core and different variants of the MacBook Pro Core.

Apple Smartwatches are being sold at ‘up to Rs 3000 off.’ The full offer is available on purchase of Apple Watch 2 Sport 38mm.