Amazfit T-Rex review: Thankfully, I had one of these delivered before the lockdown, which gave me enough time to test out features – even as last few days have been spent at home. So, here is our review of the Amazfit T-Rex. 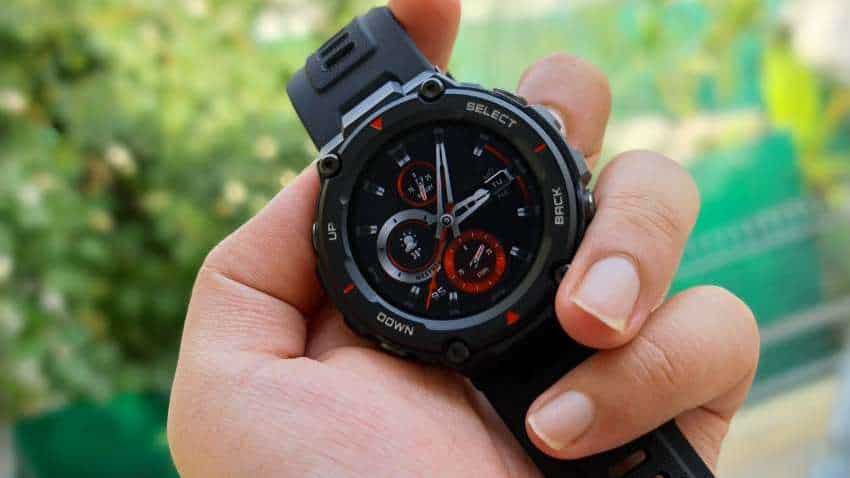 The watch is extremely lightweight and easy to carry on the wrist.
Written By: Manas Tiwari
Edited By: Harish Dugh
RELATED NEWS

Amazfit T-Rex review: If you believe that smartwatch is just another gadget for tech enthusiasts, my friend, you are wrong. It is a fast growing segment in India with more and more people giving importance to fitness. The fact is reflected in the recent sales figure of Realme. The Chinese tech company claimed to have sold over 15,000 units of its first smartwatch in just two minutes of the first sale. The response has come as a booster shot for other players in the segment, including Huami, which preponed the launch of its new smartwatch – Amazfit T-Rex. Or, did it?

Initially unveiled during CES 2020, the watch was expected to arrive in India in February. The disruption in supply chain due to coronavirus and latter’s global outbreak, forced the company to push the launch multiple times, finally putting it up for sale in the country a week before it eventually planned to.

Priced at Rs 9,999, The Amazfit T-Rex comes with features like built-in GPS, 50-meter water resistance, several sports modes and above all, a massive battery that lasts for 20 days. Thankfully, I had one of these delivered before the lockdown, which gave me enough time to test out features – even as last few days have been spent at home. So, here is our review of the Amazfit T-Rex.

The Amazfit T-Rex is certainly a lot bigger than other smartwatches in market and instantly reminds you of those G-Shock watches by Casio. I personally don’t prefer big dials and was initially turned off by the form factor. But, the T-Rex compensates for its size with its weight. The watch comes with a plastic chassis, keeping the weight under check, to be precise at 56 grams. 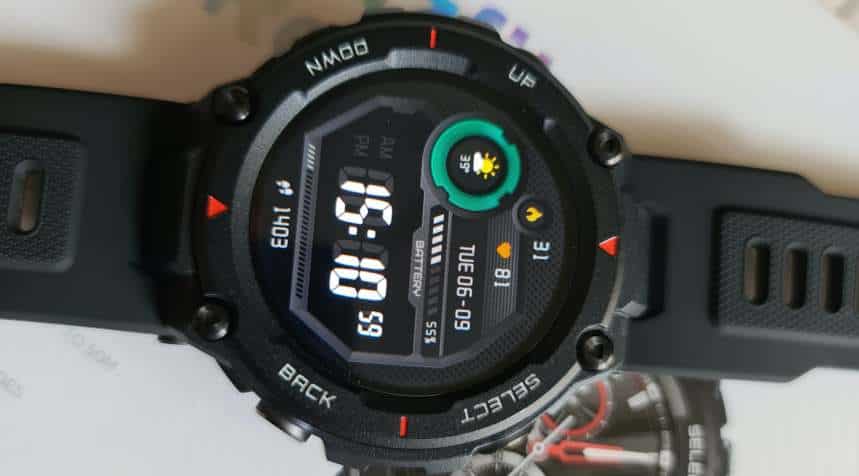 The watch is extremely lightweight and easy to carry on the wrist. However, if smaller dials are your thing, you will be better served with other options.

The watch has been given a rugged look, with four buttons on either sides, allowing you to navigate and access various features. The Up and Down buttons on the left, and the Select and Back buttons are on the right. It will take you sometime to get used to these buttons.

The Amazfit T-Rex features a 1.3-inch (360x360 pixels) AMOLED display with Gorilla Glass 3 protection. The display remains vibrant even in outdoor conditions, making the T-Rex a good companion for your runs. Additionally, you get an always-on mode if you want the screen on throughout the day. 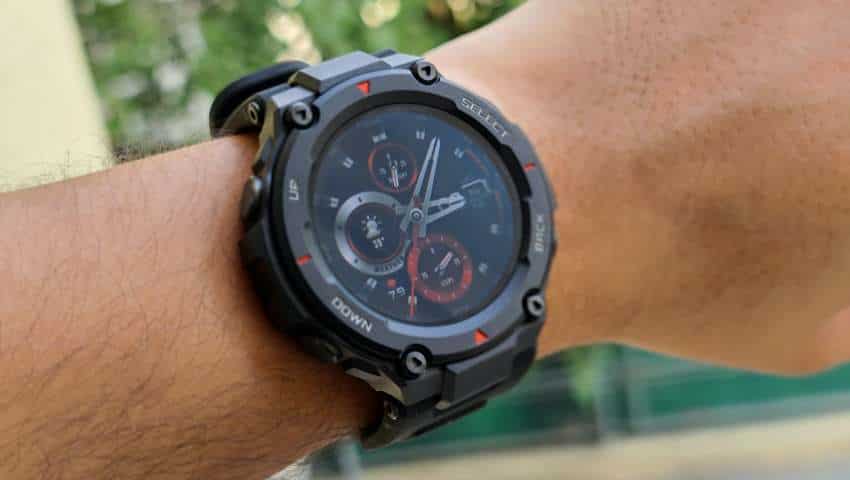 The smartwatch was launched in Ash, Black, Camouflage, Green, and Khakhi colour options. I had the Rock Black colour unit for review purposes which is basically your usual black colour variant. It’s simple, classic and looks pretty good.

Despite by extremely light for its weight, the T-Rex doesn’t disappoint when it comes to overall built quality. In fact, it sort of lives up to its name. The dial has enough rubberised protection around it, designed to take hits and survive difficult situations. If you go on frequent hikes or treks, expect this watch to excel.

In terms of offerings, you get an optical heart rate sensor (PPG), 3-axis accelerator, geomagnetic sensor, and ambient light sensor. Connectivity options on the Amazfit T-Rex include Bluetooth v5.0, GPS, and GLONASS. The watch offers 14 sports modes and can monitor heart rate, statistics of exercise duration, and other data. 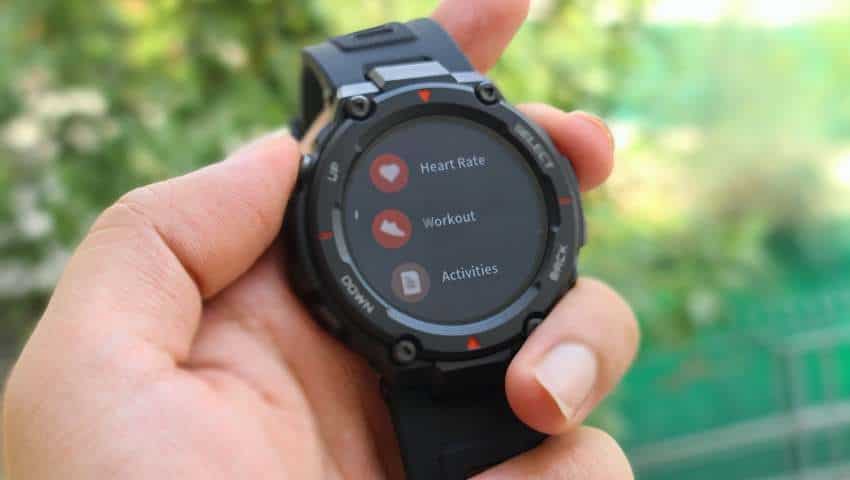 Let me start with the UI, which has improved a lot since the last time I used an Amazfit watch. Small improvements have been made to enhance user experience. You can swipe through the toggles with a highly responsive touchscreen. In case you don’t get into a habit or are working out, the physical buttons could be the alternate.

Pressing any of these buttons can light up the screen. Once the display is on, you can press the Back button to turn it off. There is also an option to allot quick action to the top button. These can be Workout, Status, Heart Rate, Weather, Notifications, Event reminder, Alarm, Compass, Countdown, Timer and Music. 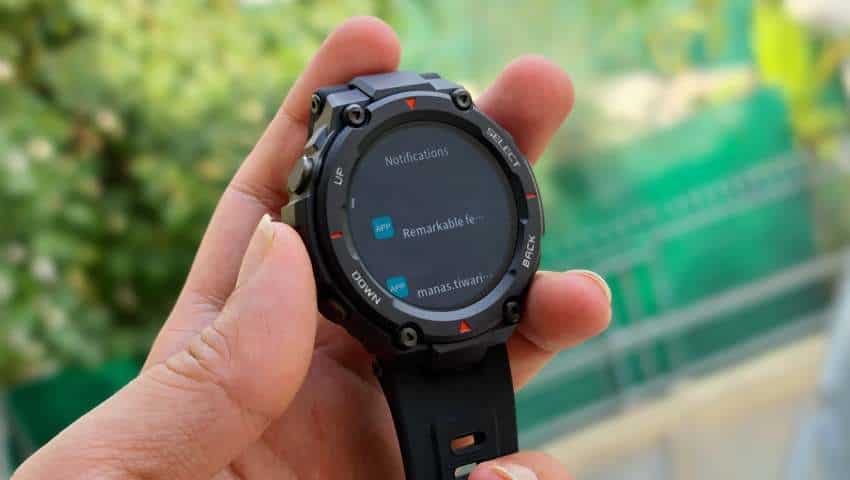 T-Rex comes with a MIL-STD 810G rating which means that this watch can withstand different weather conditions including extreme heat, cold and humidity. Also, it is 5ATM water-resistant meaning it can sustain submersion in water up to 50 meters.

The readings on the step counter and workouts logs were accurate. You can connect the watch to your smartphone and get all the data collected by it, change settings, update the firmware and more. 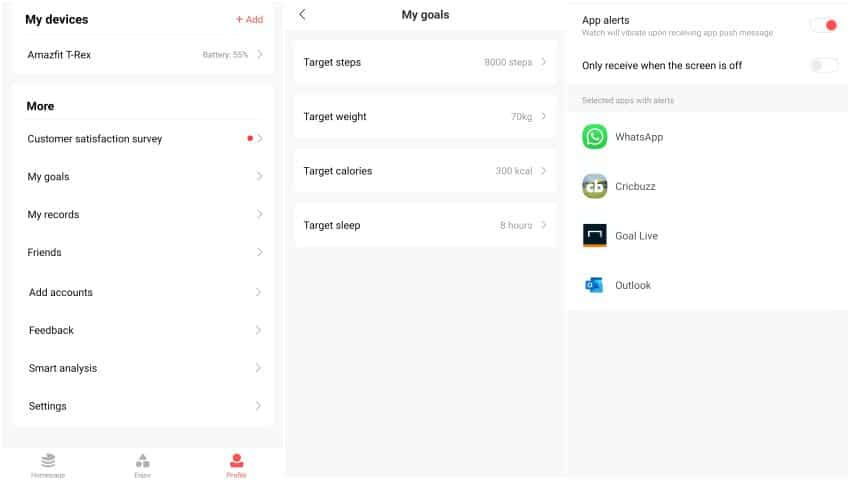 The biggest highlight here is the 390mAh battery that the company claims can last up to 20 days in daily use mode. In basic watch mode, the battery is said to last up to 66 days. And, it’s a huge advantage over any other smartwatch. I used a couple of Samsung Galaxy watches and to get even 30 hours of battery life from them was a huge task. That’s when they cost over Rs 25,000. The Realme watch, which is priced at Rs 3,999, last for six days at best.

Now, while you may feel that the T-Rex has got you covered on all aspects, it’s not true. There are several things this watch misses out on, largely as part of cost cutting practice. First of all, there is no microphone or LTE support. This means while you get notifications for calls, you don’t have the option to answer them directly from the watch. You either need to stay connected through a handsfree device or pick calls directly from your phone. 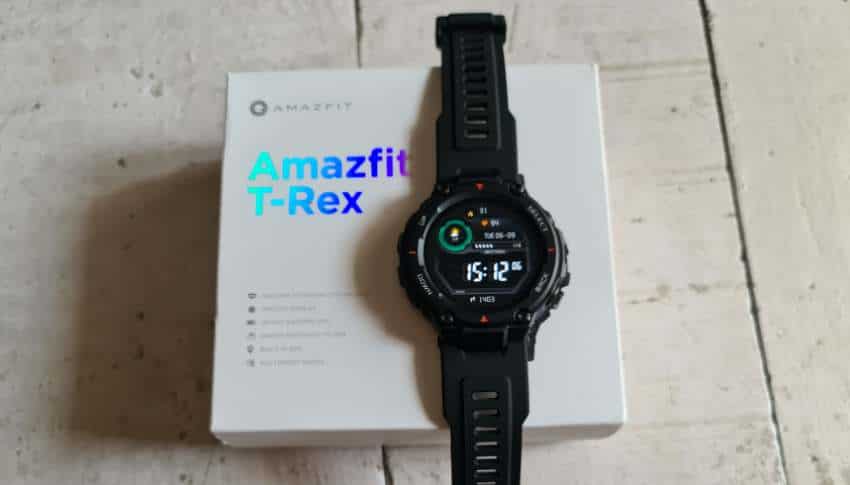 Similarly, when it comes to notifications, there is no option for instant responses. This particular feature saves you from the pain of typing on the watch. But, there is apparently no place for it on the Amazfit OS.

The next problem comes in terms of support for third party apps. Well, there is none. So, you can’t add to what’s already on offer. How is this a big deal? You can’t control Spotify from the watch!

Lastly, customisation is an important part of a smartwatch. And, this is where the T-Rex disappoints a bit. There are several watch faces on the app but you can only load two on the watch at a time, restricting your ability to change the look. Most smartwatches have more to offer on this front.

Amazfit T-Rex review: Should You Buy?

Despite some limitations, the Amazfit T-Rex is a well-crafted and beautifully designed smartwatch that sticks to the basics and avoids anything fancy or flashy. It comes with a sturdy design, features such as built-in GPS, excellent battery life, big screen, and four buttons for navigation.

If you compare the T-Rex with more premium offerings, you are likely to find some shortcomings. But given the price, the T-Rex offers a great value for your money and is a perfect match for those looking for a rugged smartwatch.