Samsung Galaxy F41 review: The Galaxy F41 comes really close to the already hit Galaxy M31 in a number of slabs. We have had this smartphone for a few weeks now and it’s time to see if justifies the price tag of Rs 16,999 or not! 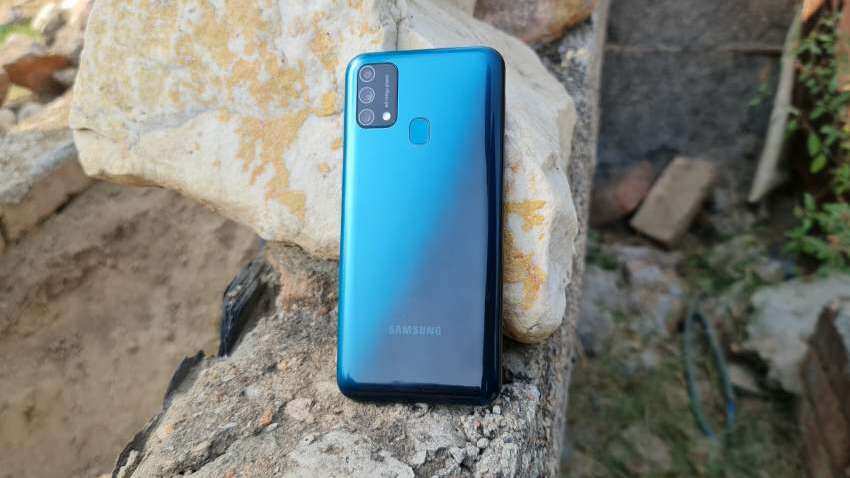 At least from back, this seems like a lustrous Galaxy M31, definitely targeting the younger audience that like trendy designs.
Written By: Manas Tiwari
Edited By: Harish Dugh
RELATED NEWS

Samsung Galaxy F41 review: In the last two years Samsung has done a phenomenal job in the budget and mid-range segments with its Galaxy M and A series, giving a tough fight to Chinese makers like Realme, Xiaomi and Vivo. In what could be a pivotal moment in South Korean smartphone maker’s journey in the country, it has added a new Galaxy F series to the portfolio, hoping to spice up the competition in the budget segment.

Samsung Galaxy F41 was launched as the first smartphone in this series which claims to focus on next gen smartphone users or in simple words, youngsters. Now, why I say that this could be a significant moment for Samsung is because there is a major overlap with the Galaxy M series, both in terms of pricing as well as specs.

In fact, the Galaxy F41 comes really close to the already hit Galaxy M31 in a number of slabs. We have had this smartphone for a few weeks now and it’s time to see if justifies the price tag of Rs 16,999 or not!

Even before I removed the plastic wrap around the Galaxy F41, I was reminded of the M31, largely due to the plastic back and a similar green colour used on the rear panel. This one, however, gets a glossy polycarbonate back panel and dual gradient finish which is likely to appeal to more users. The rest of the back panel including the rectangular camera module, fingerprint sensor and Samsung branding is very close to what you get on the M series smartphones. 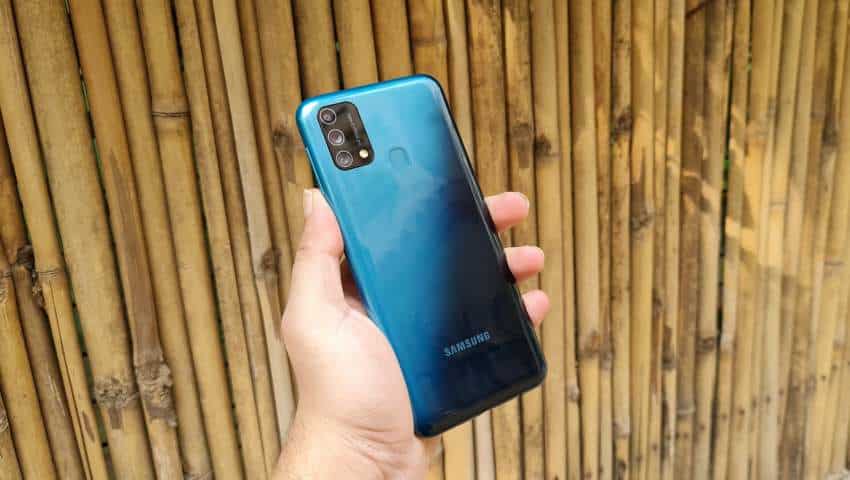 At least from back, this seems like a lustrous Galaxy M31, definitely targeting the younger audience that like trendy designs.

Samsung has lately stopped shipping a protective cover with its smartphones and I have pointed out multiple times that this is a slight issue, especially in this segment, where customers value every single add-on they get.  What it also does is instantly expose the polycarbonate back panel to a lot of scratches and dust. 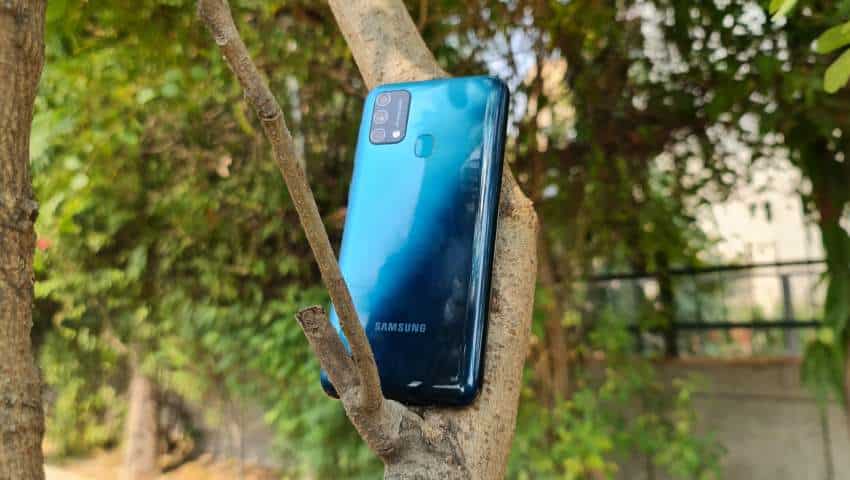 As a customer what you should look at though is that while there is no case, Samsung has ensured that you get everything else you expect on a budget smartphone. There is a – say it aloud – a 3.5mm headphone jack, a dedicated card slot and a USB Type-C charging port here. The phone is on thicker side because of the large 6000 mAh battery that it packs. 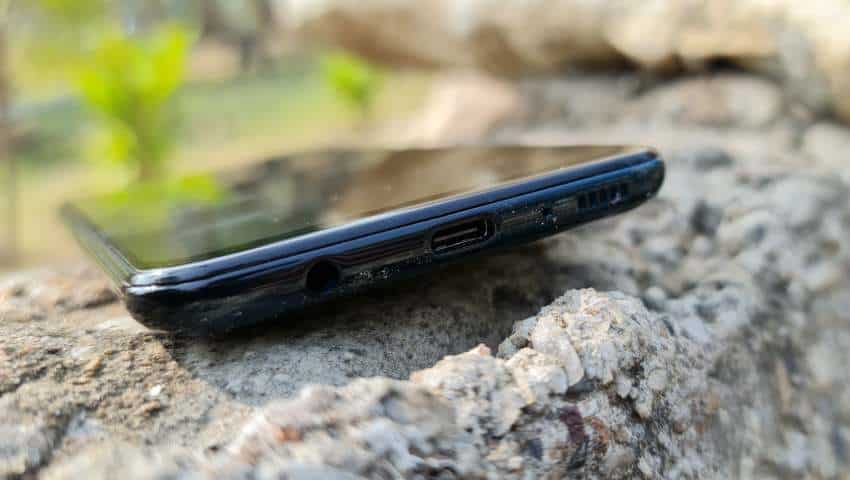 Yet, there is an excellent weight distribution which makes the Galaxy F41 easy to hold and carry around.

As far as the colours go, you get the Galaxy F41 in Fusion Black, Fusion Blue and Fusion Green colors. Because, hey! Millennials don’t understand black, blue and green! They like a bit of everything. Or, whatever! 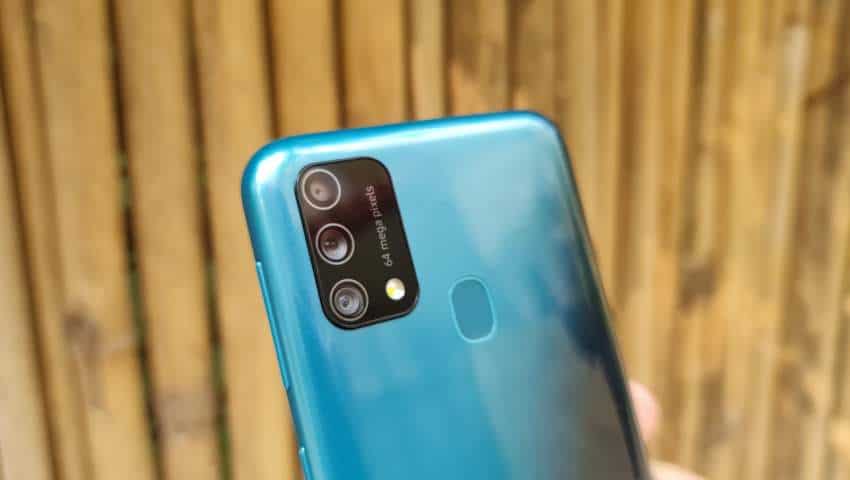 We got the Fusion Green variant which also comes out as blue if there is less light in the room. The colour is fine and again, reminds you a lot of the other M series smartphones. It is a fingerprint magnet so you should immediately go to one of those e-commerce websites and order a case for it. And yeah, don’t forget to sanitize before putting it on. I am watching ya!

Over the last six months, Twitter has been buzzing with arguments around LCD and AMOLED displays., with several people defending the former. While I agree there is no fixed formula as to which one is better, Samsung has been doing an excellent job with its AMOLED panels, especially in the budget segment. The Galaxy F41 too comes with a 6.4-inch Super AMOLED display which is bright, punchy and gets perks like adaptive brightness, screen colour mode, touch density, and accidental touch control. 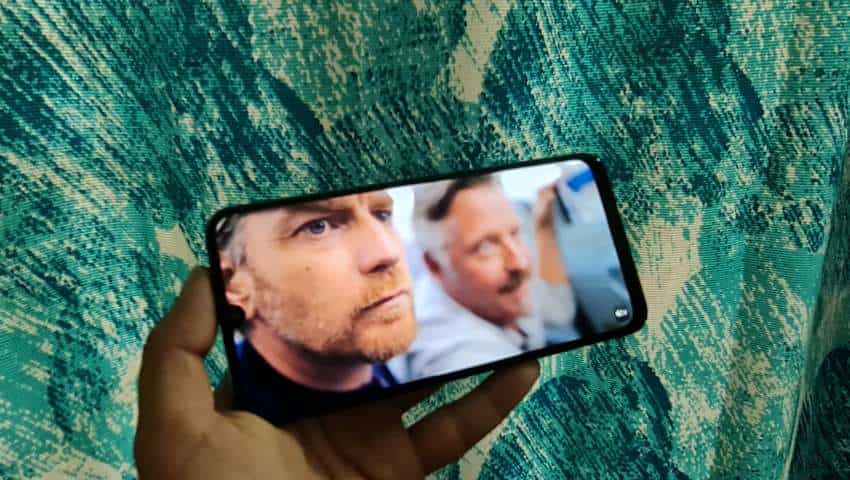 The display comes with very good viewing angles and can get really bright both indoors and outdoors. It is a bit reflective but manageable. I also liked the pre-applied wallpaper with which Samsung is shipping the phone.

I mostly used the phone to watch few YouTube videos or stream content through OTT platforms. The Galaxy F41 is capable of playing Full HD+ videos so you can expect a decent performance there. However, the speaker could have been louder. 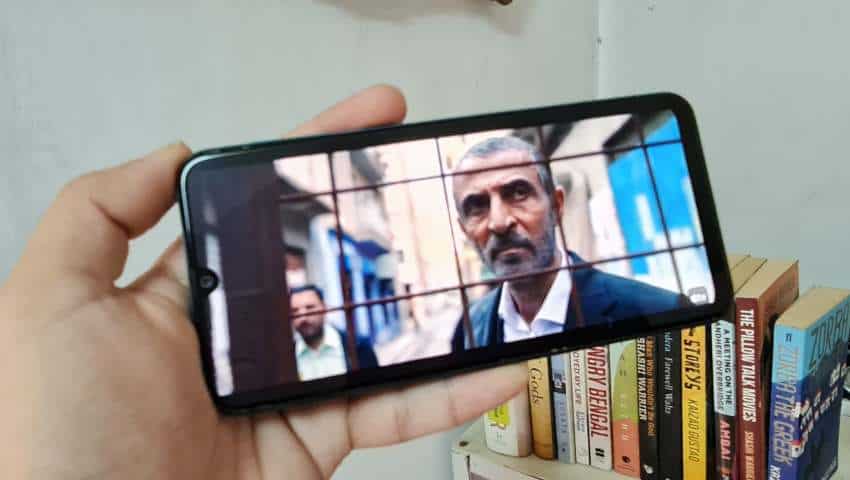 Just like other budget Samsung smartphones, the only thing you can possibly complain about in the display is the 60Hz refresh rate. And, I would have still made peace if other devices in the segment were running up to 90Hz panels. But, there are also Poco smartphones which support 120Hz refresh rate and it’s about time that Samsung ups the game as well.

In the last few months, we have seen a number of smartphones going back to what I would call ‘sane number of lenses’ on smartphones. It could be because of cost cutting or smartphone makers simply watching some Bollywood films and realizing that there are more than enough. They always have three best friends, right? 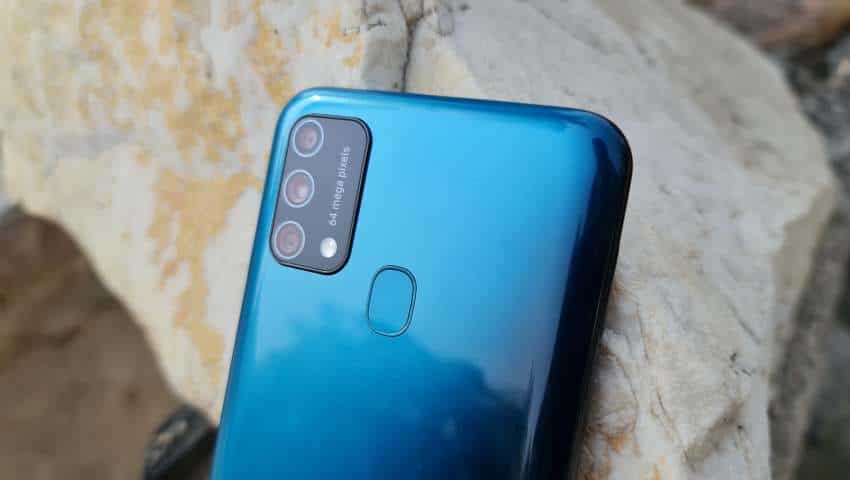 The triple rear camera module on the Galaxy F41 has a 64MP primary lens with a large f/1.8 aperture, supported by an ultra-wide lens with 8MP resolution and a 5MP depth sensor.

The Galaxy F41 comes with a sharp auto-focus which quickly locks on to the subject. The primary camera clicks good images, reminding me of the Galaxy A51 from earlier this year, which had one of the better camera performances on a Samsung smartphone. The images clicked by the Galaxy F41 are colour accurate and handle the dynamic range very well. 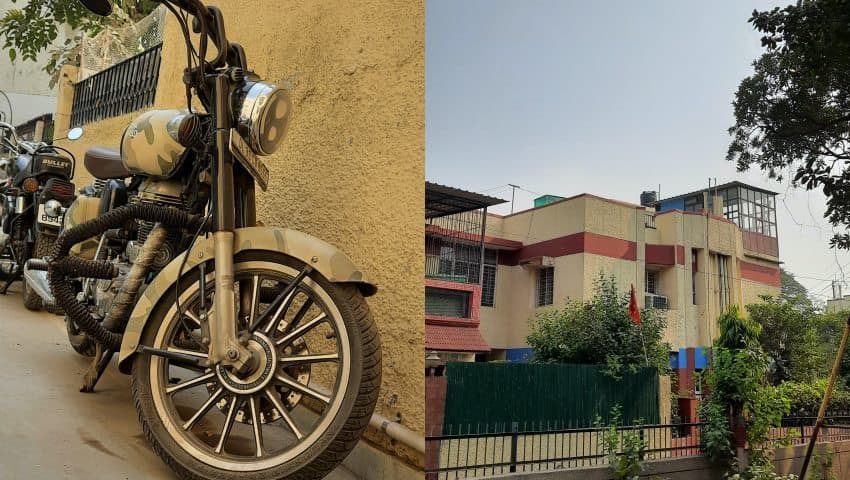 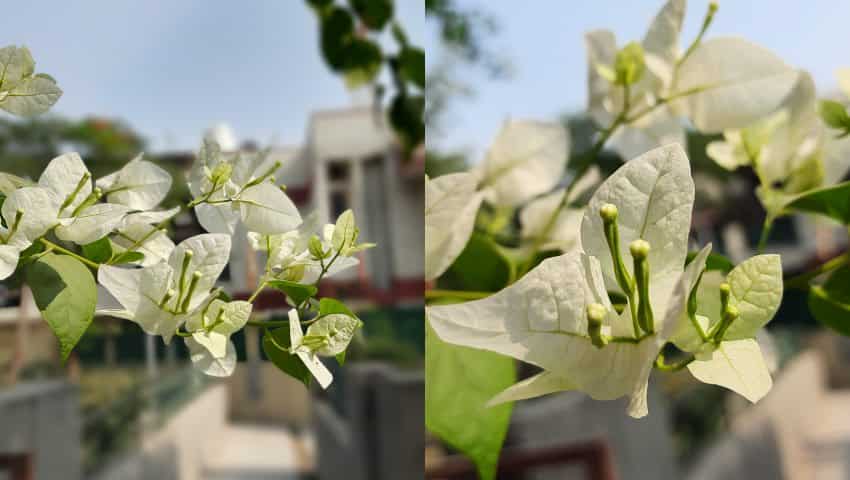 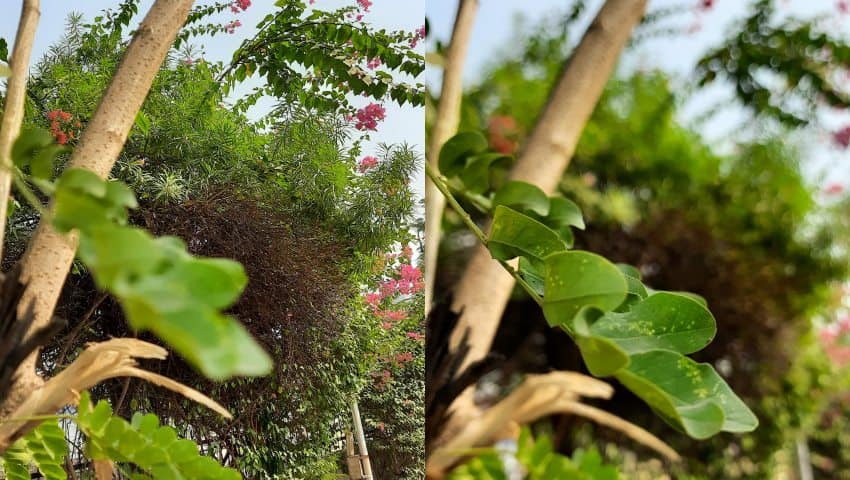 The ultra-wide-angle lens does a good job for the mid-range segment. The portrait shots are really good with precise edge detection. The camera app is also neat and gives you a lot of options to play around with. 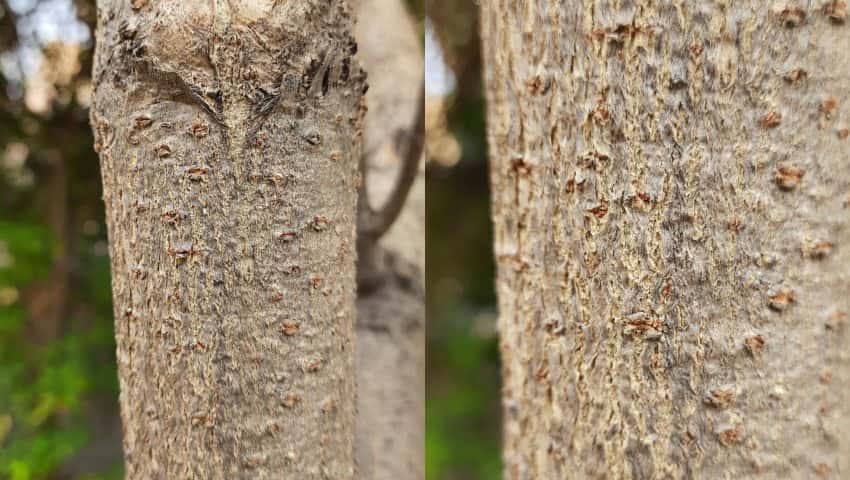 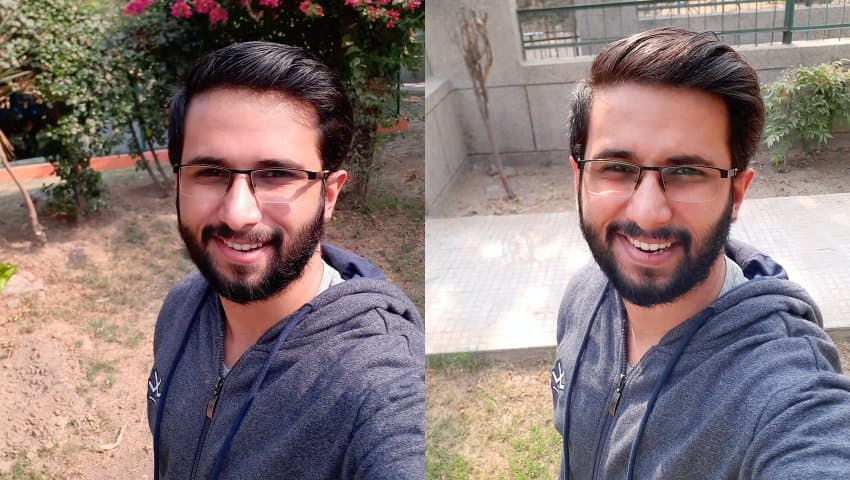 On the front, the Samsung Galaxy F41 features a 32-megapixel selfie shooter which does a decent job. It captures good detailing and doesn’t compromise the skin tones. You can also click selfies in the portrait mode.

Where do I start! Exynos 9611 SoC, again. It’s almost like someone at Samsung factory turned on their processor making machine with a code for Exynos 9611 and then forgot to shut it down. So now, they have hundreds and millions of Exynos 9611 chipsets lying around with no other option to use them on all budget smartphones. 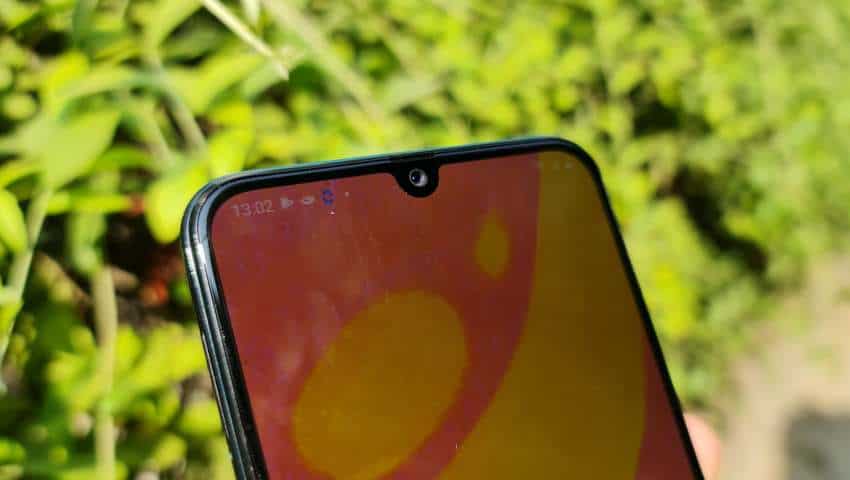 What I feel is that Exynos 9611 SoC is also suffering from Piyush Chawla syndrome. The leg spinner is four months younger than Virat Kohli but made his India debut so early and has played so much cricket that he is already considered a veteran.

In reality, the Exynos 9611 was introduced only a year ago but has powered so many Samsung smartphones since then, that it seems like a really old processor. To be fair, it’s a decent processor designed to handle multi-tasking, power management and camera performance. Combined with 6GB of RAM, you can also play basic games. It’s only when you start pushing the smartphone beyond that, the processor sometimes struggles to cope up. 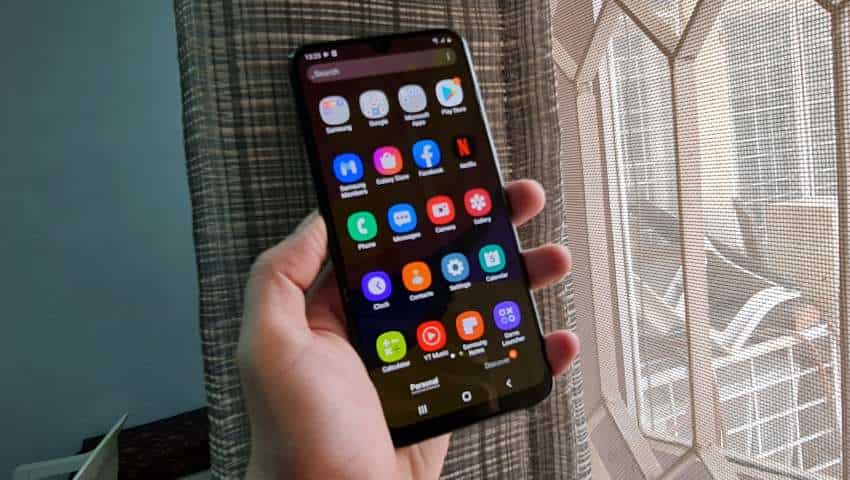 On the Galaxy F41, you get 64GB of onboard storage with the option to add more using the microSD card. The overall performance is also aided by the clean OneUI which is among one the better custom Android skins, if not the best.

The 6000 mAh batteries are what made the Galaxy M series smartphones so popular among users and also helped them stand out in a crowded budget segment. Samsung has decided to use the same battery pack on the Galaxy F41, making it a lucrative option, but also trespassing the M series territory again. Since this is not a performance-heavy smartphone and runs the standard 60Hz panel, you can expect that battery to easily last over 36 hours on moderate use. Even on heavy usage, the phone should be able to give you between 24 to 30 hours easily.

The Galaxy F41 comes with a 15W charger which can take over 2 hours to fully charge the device.

Whether a series in similar segment and interchangeable features really required, can be debated. Now, that the Galaxy F41 is here, let’s just focus on whether it makes for a good device or not. This smartphone is more or less a lustrous Galaxy M31 which definitely spices up the budget segment. It gets all perks of the Galaxy M series and has a better fashion sense among the two. The design is trendy, display is as good as you get, camera performance is top class and the battery refuses to die.

If you have to list down the shortcomings, the 60Hz refresh rate tops the list. The waterdrop notch looks slightly outdated. And, Exynos 9611 SoC. What about it? That’s enough. Despite these limitations, the Galaxy F41 offers a great value for your money and deserves consideration whenever you are planning to buy a budget smartphone.