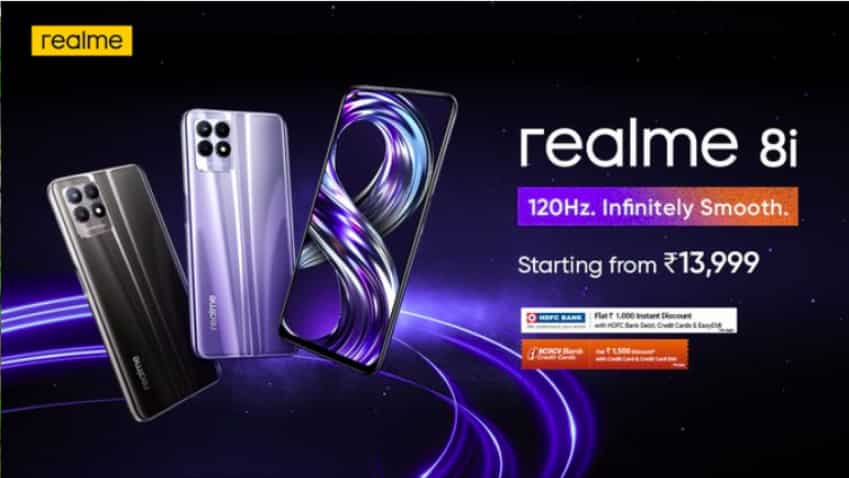 Realme 8s 5G will be available in two colours - Universe Blue and Universe Purple. It comes in two variants 6GB+128GB priced at Rs 17,999 and 8GB+128GB priced at Rs 19,999 respectively. The first sale is scheduled for 13th September, 12:00 PM onwards on realme.com, Flipkart & Mainline channels. As bank offers, users can avail flat Rs 1500 off on HDFC card on Flipkart and avail of flat Rs 1500 off on ICICI cards.

Realme 8i will be available in two colors - Space Black and Space Purple with two storage 4GB+64GB priced at Rs 13,999 and 6GB+128GB priced at Rs 15,999 respectively. The first sale is scheduled for 14th September, 12:00 PM onwards on realme.com, Flipkart & Mainline channels. As bank offers, users can avail flat Rs 1000 off on HDFC card on Flipkart and avail flat Rs 1000 off on ICICI cards on realme.coml

Realme 8s sports a 6.5-inch display with a 90Hz refresh rate, and a resolution of 1,080 x 2,400 pixels. The LCD panel has an aspect ratio of 20:9. In terms of processing power, Realme 8s is claimed to be the world’s first to equip the MediaTek Dimensity 810 SoC. The chipset is paired with either 6GB/128GB storage, or 8GB/256GB native storage.

The phone also gets Realme’s Dynamic RAM Expansion Technology that brings up to 13GB of additional memory using the internal storage. The phone comes with a dedicated microSD slot for expandable storage support. It runs realme UI 2.0 based Android 11 OS right out of the box.

On the camera front, the new Realme phone offers a triple rear camera including a 64MP primary sensor, an 8MP ultra-wide lens, and a 2MP depth sensor. Upfront, it has a 16MP shooter to click selfies. The phone packs a 5,000mAh battery and supports 33W Dart Charge fast charge solution.

Realme 8i specifications
The Realme 8i  comes packed with a 6.6-inch LCD display with 120hz screen refresh rate, 100% DCI-P3 Color Space and a 180Hz touch sampling rate. Under the hood, the Realme 8i is powered by MediaTek Helio G96 SoC paired with up to 6GB RAM and 128GB of internal storage with support for expandable RAM.

In terms of camera specifications, the Realme 8i includes a 50MP triple rear camera system consisting of a B&W lens and a 2-megapixel macro lens. For selfies and video calls, the smartphone comes packed with a 16-megapixel selfie shooter.

Some of the other specifications of the Realme 8i include a three card slots for two SIM cards and one SD card (up to 256GB), side mounted fingerprint sensor, Realme UI 2.0, a 5000mAh battery with support for 18W fast charging out-of-the-box.