Poco M3 5G launch: After successfully launching its M3 smartphone in the Indian market, the Chinese handset maker Poco is all set to launch the 5G variant of Poco M3 in the global market on May 19. 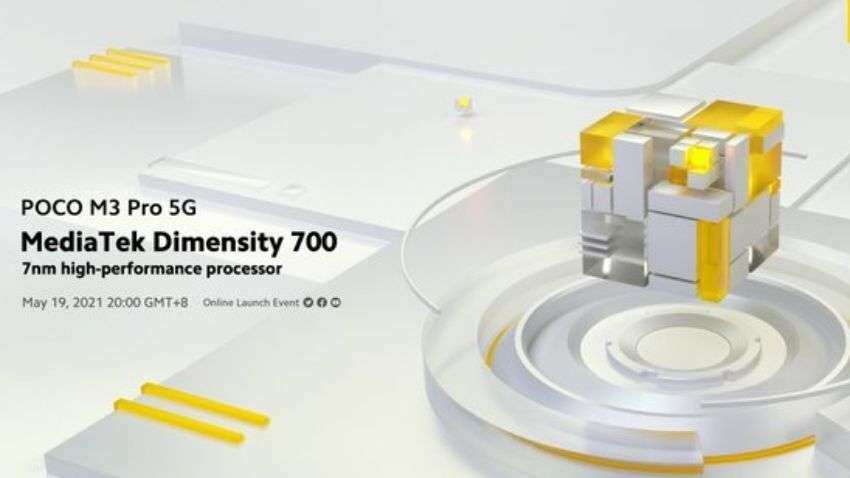 The smartphone will go official in the global market on May 19. Source: Poco/Twitter
Written By: Bharat Upadhyay
Edited By: ZeeBiz WebTeam
RELATED NEWS

Poco M3 5G launch: After successfully launching its M3 smartphone in the Indian market, the Chinese handset maker Poco is all set to launch the 5G variant of Poco M3 in the global market on May 19. Now, ahead of the official release, the company has confirmed the chipset that will power the upcoming Poco M3 with 5G support.

The company took to the micro-blogging platform Twitter and revealed that the Poco smartphone will be powered by MediaTek Dimensity 700 SoC instead of Qualcomm Snapdragon chipset. Poco wrote: "#POCOM3Pro 5G features the MediaTek Dimensity 700!. A 7nm high-performance processor with more power and more efficiency!. More speed for all of your entertainment needs. #MoreSpeedMoreEverything indeed!"

The smartphone will go official in the global market on May 19. There are no reports on the India launch of the Poco M3 5G yet but the smartphone will be launched in India.  The 4G variant is already available in the country at a price starting at Rs 10,999 for the base model with 64GB of internal storage.

According to a report from BGR India, the Poco M3 5G has been subjected to several leaks and rumors. Recently leaked renders revealed the complete design of the smartphone. The renders revealed three colour options, triple rear camera setup, and a punch-hole screen. This could mean that the upcoming Poco phone will include an LCD panel. The renders also suggest that the Poco smartphone will include a side-mounted fingerprint scanner.

Several reports suggest that the Poco M3 Pro 5G will be a rebranded version of the Redmi Note 10 5G with a fresh design. If that turns out to be true, expect the Poco phone to come packed with a 6.5-inch FullHD+ 90Hz LCD display, 48MP triple camera setup, 8MP selfie shooter, and a 5,000mAh battery with 18W charging support