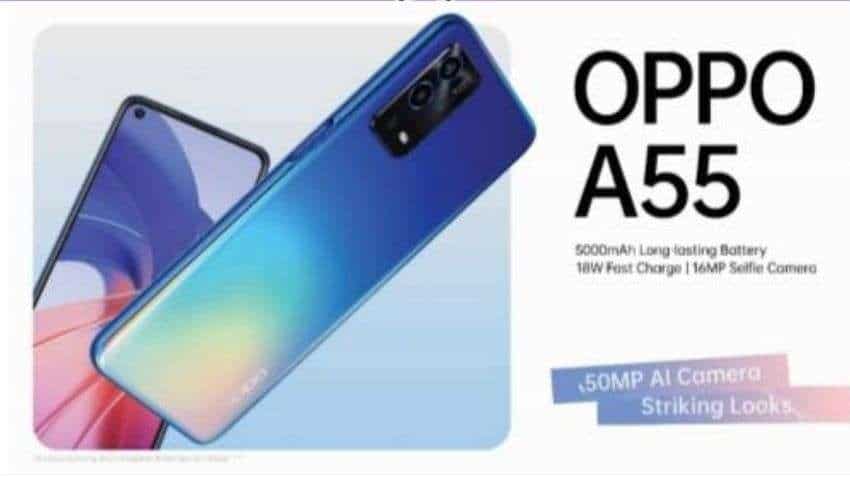 The smartphone comes with 50MP AI triple camera along with a 2MP bokeh shooter and a 2MP macro snapper.

Launch offers on the Oppo A55 include a Rs. 3,000 instant discount on HDFC Bank cards and EMI transactions through Amazon. The e-commerce site will also bundle three months of Amazon Prime Membership worth Rs. 329.47.

Additionally, Prime members will get a free screen replacement guarantee that will be valid for the first six months. The phone can also be purchased with up to six months of no-cost EMI options.

Offline stores will also offer up to Rs. 3,000 cashback and no-cost EMI options for up to three months on select credit and debit cards. Similarly, the Oppo India E-Store will have a 10 percent instant discount for customers of Axis Bank, Bank of Baroda, and Kotak Mahindra Bank.

The smartphone comes with 50MP AI triple camera along with a 2MP bokeh shooter and a 2MP macro snapper. And, there is a 16MP from camera for selfies, the company said in a statement.

The device features a 5000mAh long-lasting battery which allows around 30 hours of call time or 25 hours of music streaming. It also comes with 18W fast charge technology that juices the handset up to 33 per cent in only 30 minutes, the company claimed.

The Oppo A55, available in rainbow blue and starry black, sports a stylish 3D curved design. The smartphone also carries an IPX4 rating for splash-resistance and sports a battery cover that has a faux metal texture.

The device also includes FlexDrop feature that minimises app windows when you multitask and Three-finger Translate with Google Lens that allows you to capture and translate screen-shotted text.