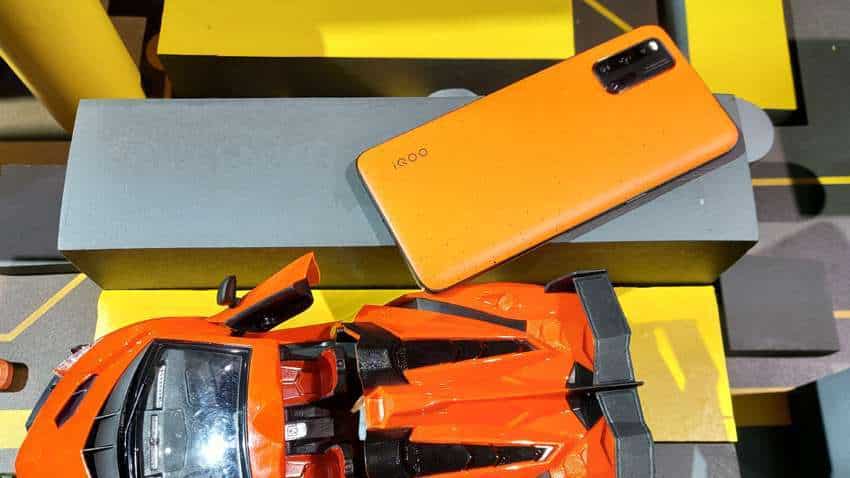 Launched earlier this year, iQOO 3 was one of the first 5G-enabled smartphones in India.
Written By: ZeeBiz WebTeam
Edited By: Harish Dugh
RELATED NEWS

The Samsung Galaxy S20+ was launched at Rs 77,999 in India. During the Flipkart Big Billion Days sale, the smartphone will be available a discounted price of Rs 49,999. The smartphone will be available at this price, starting on October 16, with a whopping Rs 28,000 discount. The smartphone is powered by the Exynos 990 chipset and comes with 8GB of RAM and 128GB of storage. It also has a 12-megapixel primary camera, a 12-megapixel wide-angle camera, a 64-megapixel telephoto camera and a depth sensor. There's a 4,500mAh battery, with support for fast charging.

The LG G8X Dual Screen smartphone which will be available with a massive discount of Rs 50,010. The dual screen smartphone is priced at Rs 70,000 but can be purchased for Rs 19,990 during the Big Billion Days sale. LG G8X ThinQ comes with a dual-display accessory in the box. It features a 6.4-inch full HD+ OLED display inside and a smaller 2.1-inch monochromatic display on the cover to showcase notifications, time, and battery life. The case connects to the phone via a USB Type-C port and charges via magnetic pins.

Samsung Galaxy Note 10 was so far priced at Rs 75,000 on Flipkart. At the Big Billion Days sale, the flagship from yesteryear can be bought at just Rs 54,999, with a discount of Rs 20,000. The smartphone features a 6.3-inch Dynamic AMOLED display, the Exynos 9825 flagship SoC from 2019, and a triple rear camera with 2x optical zoom and 4K60p video recording.

Launched as a competitor to Samsung’s Galaxy S20 smartphones, Motorola Edge+ will be available at Rs 64,999 against the launch price of Rs 74,999. The phone comes with a 6.70-inch touchscreen display and an aspect ratio of 21:9. Motorola Edge+ is powered by an octa-core Qualcomm Snapdragon 865 processor. The Motorola Edge+ runs Android 10 and is powered by a 5000mAh non-removable battery.

Launched earlier this year, iQOO 3 was one of the first 5G-enabled smartphones in India. The base model of the phone was priced at Rs 37,990 during the launch and will be available at Rs 29,990 after a discount of Rs 8,000. The iQoo 3 is powered by Qualcomm Snapdragon 865 processor. The smartphone was launched in three color options - black, orange and purple. It features a quad rear camera at the back which comprises of a 48MP main camera, a 13MP Telephoto unto 10x Zoom, a 13MP super wide angle with 120° and macro camera and 2MP Bokeh camera.