Realme is set to launch Realme 8 5G in India today via an online launch event at 12:30 pm. According to the company, the upcoming Realme smartphone will be available for purchase on Flipkart, the Realme website and later on offline stores. 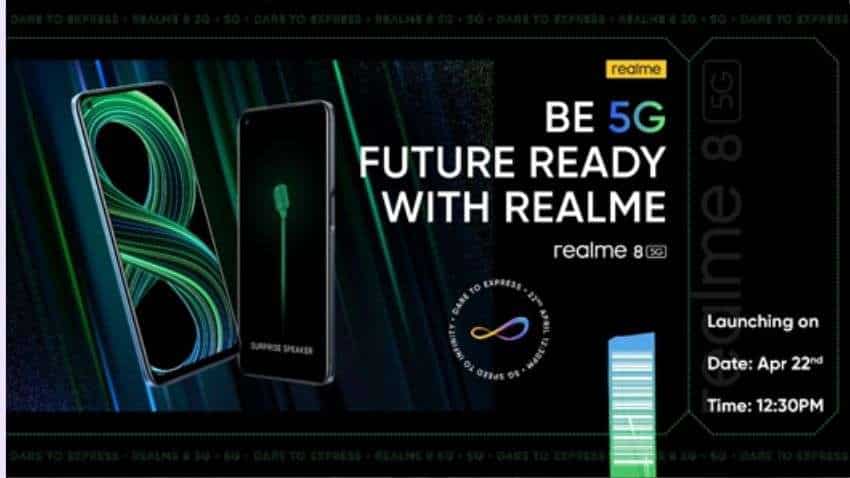 Globally, the smartphone has been launched at a starting price of THB 9,999, which roughly translates to Rs 24,000. However, according to the sources, this device might launch at cheaper rates in the Indian market.

In a media invite: "At the digital launch, Realme will announce its much anticipated first 5G smartphone in the number series, the Realme 8 5G, which features India's first MediaTek Dimensity 700 5G processor with excellent performance. We are beyond thrilled to have you join us on April 22 at 12.30 P.M. at the digital launch of Realme 8 5G. Join us here to witness the launch of our first 5G smartphone in number series-Realme 8 5G Link. "

According to the company, The Realme 8 5G India launch event will begin at 12:30 pm. You will be able to watch the event live on Realme’s YouTube and social media channels.

The affordable 5G smartphone sports a similar design as the Realme 8 4G version, which launched in the country earlier this year.

The Realme 8 5G features a 6.5-inch FHD+ display with a 90Hz refresh rate. It is powered by the MediaTek Dimensity 700 SoC coupled with up to 6GB RAM and 128GB internal storage. The phone also supports Dynamic RAM Expansion that as the term suggests, increases the phone’s RAM capacity by using internal storage. On the software front, the phone runs on Android 11 with Realme UI on top.

On the camera front, the Realme 8 5G packs a triple camera system that includes a 48-megapixel primary sensor, a macro lens, and a mono lens. On the front, there’s a 16-megapixel image sensor for selfies and video calls. It packs a 5,000mAh battery with support for 18W fast charging.