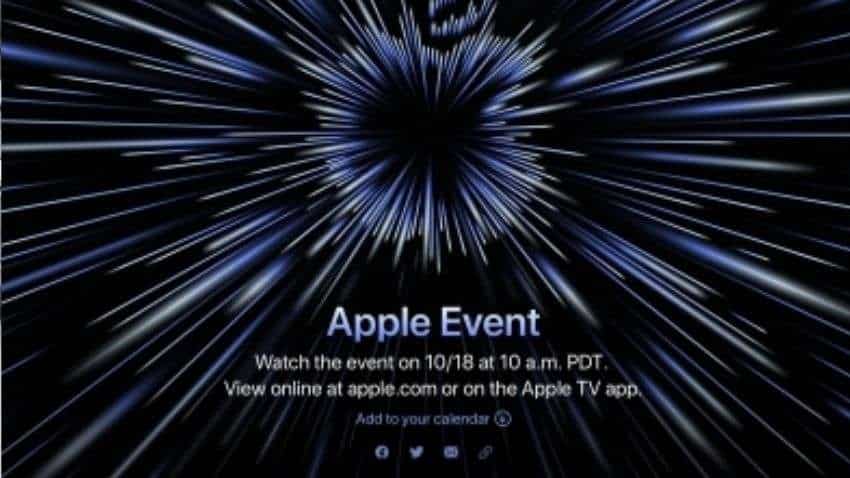 The event will be broadcast live from Apple Park.
Written By: ZeeBiz WebTeam
Edited By: Shivendra Kumar
RELATED NEWS

Apple event 2021: After successfully launching its latest iPhone 13 series smartphones last month, the US-based tech giant Apple has announced that it will be holding a special event on Monday, October 18 at 10 a.m. Pacific Time. At the October event next week, the company is likely to announce new Macbook Pro models, AirPods 3, Mac mini, and more.

Apple, however, hasn’t exactly revealed the products that will be announced at the virtual event.  The event will be broadcast live from Apple Park. Apple is teasing the event with the tagline "Unleashed" which is likely a hint at the new M1X MacBooks.

The event will be live-streamed across Apple's website, on the company's YouTube channel, and via the Apple TV application on iPhone, iPad, Mac, and Apple TV. Apple is expected to announce its next-generation Mac computers, powered by the company's own Apple Silicon chips, IANS reported.

According to industry sources, the shipments for LEDs and associated components to Apple assembly partners relating to the MacBook Pro models are on schedule as expected. Apple's use of mini-LED panels in its forthcoming MacBook lineups will catalyse supplier investment and push the entire industry toward adoption of the display technology.

The redesigned 14 and 16-inch MacBook Pro models due this year are expected to feature next-generation Apple silicon chips, the removal of the Touch Bar, the return of the MagSafe magnetic power cable and an overall new design with a HDMI port and SD card slot.

Analyst Ming-Chi Kuo believes that Apple is already "actively looking for second suppliers of key Mini LED components," and if its mini-LED notebooks receive positive feedback, other notebook makers and their suppliers will inevitably be pushed towards adoption of the technology.