WhatsApp vs Signal: After millions of people across the globe left Facebook-owned WhatsApp messaging app over privacy issues, its big rival Signal, an encrypted messaging app, has been in the limelight. 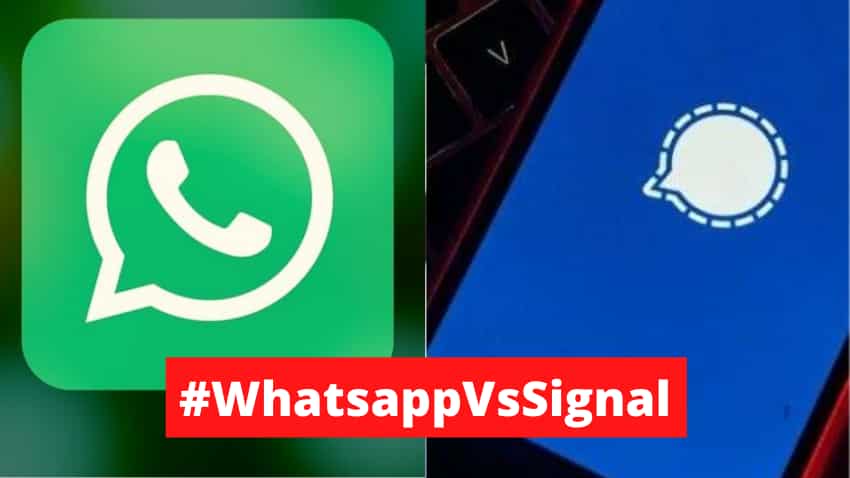 Signal has reportedly introduced new features that are almost similar to the WhatsApp.
Written By: ZeeBiz WebTeam
Edited By: Harish Dugh
RELATED NEWS

WhatsApp releases 'Vaccines for All' Sticker Pack; Check how to download and send to friends

WhatsApp vs Signal: After millions of people across the globe left Facebook-owned WhatsApp messaging app over privacy issues, its big rival Signal, an encrypted messaging app, has been in the limelight. Many WhatsApp users around the world had switched to Signal platform after the privacy storm broke on the internet.

In a bid to attract more users its platform and give some tough competition to rival WhatsApp, Signal has reportedly introduced new features that are almost similar to the WhatsApp. This comes at a time when WhatsApp seems to be embroiled in a controversy over its new privacy rules.

As per the estimates in India, Signal saw more than 3 million downloads in the first week of January. With the new features, Signal has its eyes on the humongous user base of WhatsApp, the Zee Media Bureau reported.

Here’s a sneak peek on the 8 new features that Signal has for users:

Signal Custom Wallpapers: In 2020, WhatsApp launched custom wallpapers where users were given an option to choose different wallpapers for different chats. now in 2021, rival app Signal is set to roll out a similar feature for both Android and iOS users which will allow users to set individual wallpaper for separate chats.

Signal ‘About’ Status: People familiar with WhatsApp knows that it asks for the user’s description by asking them to add their ‘about’ status or select from 11 options — ‘Available’, ‘Busy’, ‘At school’, ‘At the movies’, ‘At work’, ‘Battery about to die’, ‘Can’t talk’, ‘WhatsApp only’, ‘in a meeting’, ‘At the gym’, ‘Sleeping’ and ‘Urgent calls only’.

Now Signal is also planning to launch this new feature which will ask you to update your Bio with options like ‘Speak freely’, ‘Encrypted’, ‘Free to chat’, ‘Coffee lover’, ‘Taking a break’, ‘Be kind’ and ‘Working on something new’.

Signal Animated Stickers: WhatsApp's most popular features animated stickers are soon going to be there in the Signal as it plans to come up with some interesting stickers that might interest their user base.

Signal Starred Chats: According to the reports, Signal may also come up with Starred Chats like WhatsApp which basically allows users to bookmark specific chats which one can easily refer back to them when needed.

Low-data mode: Instant messaging app WhatsApp has an option called low data mode which basically saves user data during chats and calls. The Signal is planning to come up with a similar feature that may soon allow users to find ‘Use less data’ under the ‘Data usage’ section for calls.

Signal Contact Suggestion: The encrypted messaging app Signal app is coming up with a feature that is almost similar to WhatsApp and it allows users to see their most frequent chats.

Signal Download Preferences: Facebook-owned WhatsApp gives users a choice to automatically download photos, audio, videos, and documents. Similarly, Signal has a feature that allows users to choose if media files should be automatically downloaded on their devices, according to Zee Media Bureau.

Signal Group Calls: The encrypted messaging app Signal has increased its number of group calls feature from 5 to 8 and this is also similar to WhatsApp which allows up to 8 participants to video call with each other.

WhatsApp releases 'Vaccines for All' Sticker Pack; Check how to download and send to friends