Continuing with its ban orders on apps that have links with China, the Indian government on Tuesday blocked 43 new mobile apps, including shopping website AliExpress owned by e-commerce behemoth Alibaba. Other popular apps that have been banned include WeWorkChina, CamCard and Snack. 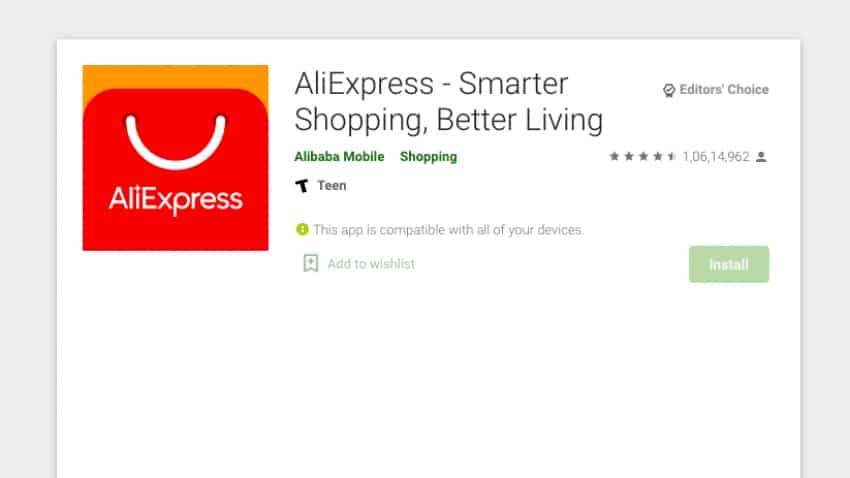 Other popular apps that have been banned include WeWorkChina, CamCard and Snack. Source - Google Play Store.
Written By: Manas Tiwari
Edited By: Harish Dugh
RELATED NEWS

Continuing with its ban orders on apps that have links with China, the Indian government on Tuesday blocked 43 new mobile apps, including shopping website AliExpress owned by e-commerce behemoth Alibaba. Other popular apps that have been banned include WeWorkChina, CamCard and Snack. These apps have been banned by the Ministry of Electronics and Information Technology (MeitY) for engaging in activities which are "prejudicial to the sovereignty and integrity of the country, defence, security of the state and public order".

The move has been welcomed by the Indian developers who expect more similar actions going forward. Varun Saxena, Founder and CEO, Bolo Indya extended support to the government move.

“This is yet another welcome move from the government to stand against Chinese apps that always have had serious privacy issues. We happily extend our support to all the language users and creators of Snack video especially who are residing  in tier 3/4 cities  to come and join Bolo Indya as we stay committed to provide them the unparalleled opportunity to earn by making videos, gaining follower base and highly engaging content that users love to watch over 30 min every day,” he said.

“Some of these apps were banned earlier as well but they just cloaked themselves under a new identity to enter the Indian market. The ban is a very smart move and sends out a clear message that Chinese apps can't use such tactics to engage in activities that are 'prejudicial to India's sovereignty'. At the same time, we would like to assure our Chingari family that the safety of their data is our highest priority,” Sumit Ghosh, CEO, Co-founder Chingari said.

The ministry banned these apps based on reports received from the Indian Cyber Crime Co-ordination Centre, Ministry of Home Affairs.

“I think this is a strong move by the government that sends out a strong message that Indian data cannot be compromised. We welcome anyone to do business here, but Indian users data must be protected through safe means. There are many apps in the market, which can be better alternatives of Chinese apps like –AliExpress, CamCard etc. During the last two times ban on apps home grown apps have seen a huge increase in the number of downloads. Domestic applications developers recruited and this opportunity has also opened up the job market under the segment which will eventually have an added boost to the Indian economy,” a spokesperson from UDO-now said.

Ankit Chaudhari, CEO & Founder, Aiisma believes that this move was due for a while and more bans could be coming soon.

“This was due for a while now and even more could be in pipeline. E-commerce/payments/online dating are the primarily targeted infrastructures that have access to quite a lot of critical consumer information. What needs to be seen is if Indian alternatives are able to replace with profits these existing platforms rather than just replace them with a burn,” he said.